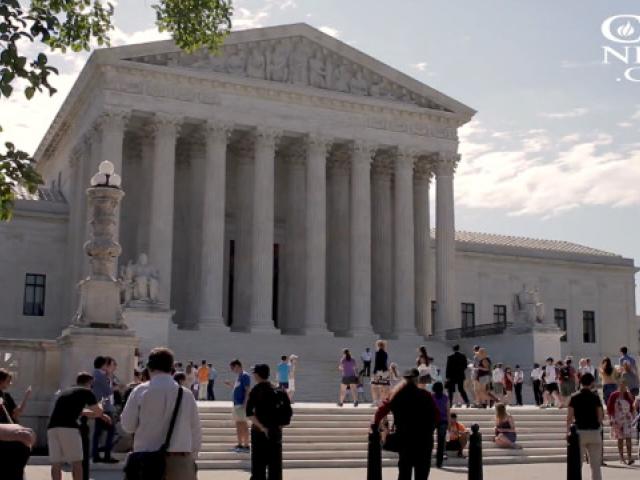 If you believe the mainstream media, you might think President Trump doesn't get much done except to get involved in daily controversies.   But there's at least one area where he's making major changes that could affect the country for decades, even generations to come.

Leonard Leo has had a huge impact advising the president in a personal capacity on picks for federal judgeships.

Leo told CBN News, "This president has an opportunity to potentially fill as many as 40 percent of the seats on the federal bench.   And that will just be transformative."

President Obama picked left-leaning jurists and George W. Bush safe, non-controversial nominees.  But Trump has been nominating judges in the mold of the late Antonin Scalia, who gave first priority to the U.S. Constitution and to the law as it's written, rather than coming up with his own interpretations.

There are some 107 vacancies and Leo stated that if Trump fills them all with strict constitutionalists, their influence, "Will last 40, 50 years and will have an enormous impact on the future of our country."

In The Scalia & Gorsuch Mold

"These are very solid, highly intellectual, conservative jurists or jurists-to-be," John Malcolm of the Heritage Foundation stated.   "I think that it is a strong group of originalists and textualists in the Scalia and now Neil Gorsuch mold."

Malcolm suggested several of the names on Trump's short list of possible Supreme Court justices.
But he pointed out to CBN News that most of Trump's nominees will sit on lower courts. He said that's important because those courts decide 99 percent of the federal cases.

"There was a decided leftward tilt by some of these courts during the Obama administration.  So I think from a conservative standpoint, getting that shift by the judiciary turned back in the right direction is incredibly important to the direction of the law," Malcolm said.

Constitution Protects From 'The Heavy-Handed Nature Of The State'

Leo spoke of why judges who go by the Constitution itself matter so much.

"At the end of the day, It's that structural Constitution that really protects human freedom and which really preserves human dignity from the heavy-handed nature of the state," Leo stated.

Many voters said it was Trump's stand on constitutionalist judges that was their major reason to vote for him.  And Leo understands.

As he put it, "The president loves America and he understands that the Constitution and in particular the Constitution the way the Framers meant it to be has something to do with our exceptional character and quality as a country."

It is President Trump's job to pick judicial nominees.  But without good allies on Capitol Hill, he really couldn't get that far.

Majority Leader Mitch McConnell's had a rough time getting major legislation passed in Trump's first year, but he's shown an iron resolve in fighting for the president's court nominees.

"It seems Leader McConnell is working with the President to try to expedite the process," Malcolm explained.  'He's just announced that he's going to keep the Senate in session longer, which should allow more nominees to go through."

But Democrats have been fighting to slow the confirmation process to a snail's pace, like demanding 30 hours of debate on each nominee, which could consume years and years.

"It would take longer than FDR served in office to get these nominees through," Malcolm said with a bit of a smirk.

Even Stalling A Nominee Confirmed 100-To-0

He gave as an example of someone stalled for no other reason than stalling itself: Idaho's David Nye, who was originally picked by Democrat Obama and re-nominated by Trump.

Malcolm related, "The Democrats insisted on 30 hours of debate on David Nye even though at the end of the day he was confirmed a hundred to nothing.  He was always going to be confirmed.   But just to eat up floor time, the Democrats insisted on 30 hours of debate."
Republicans have an important factor in their favor, though, courtesy of a Democrat: former Senate Majority Leader Harry Reid. He wiped out the filibuster of judicial nominees.  So the now minority Democrats can't use it to stop Republican nominees.

'What Goes Around Comes Around'

"Well, that falls under the category of what goes around comes around," Leo said with a smile.  "Basically, Senator Reid made the decision that he wanted to have a non-filibuster environment for judges."
"Harry Reid did this in order to pack the D.C. Circuit Court of Appeals," Malcolm explained.  "It's widely considered — I think correctly so — as the second most powerful court in the land."
But Leo suggested what's good for the goose is good for the gander, saying, "And the fact of the matter is, if that's the rules that the Senate wanted to play by then, those are the rules that we should play by today."

Leo isn't against the filibuster just because he wants to see the Republicans get the judges confirmed they want.

He told CBN News,  "I think having filibusters for judges is silly.  It's not like legislation where you want to slow the process down, there's a lot of give and take, a lot of deliberation; a lot of permutations of what can ultimately result.  The nominee who comes in is the same person who comes back out.  It doesn't change."

It's easy, though, to see why the Democrats fight so hard to stop Trump filling the federal courts with judges along the lines of Scalia.

Malcolm said of those judges, "These folks are life-tenured.    And often the longest-lasting and often the greatest legacy that a president leaves behind after they leave office is their appointees to the federal bench, in particular the Supreme Court."

And the High Court has had a tight 5-to-4 split for years on nearly every major issue.

As Leo put it, "People have to understand why the Supreme Court was so consequential in this election is because the Court has for quite a number of years now hung in the balance by 5-to-4 votes one way or the other.  And that's a 5-to-4 balance on almost every major issue that we deal with: freedom of religion, freedom of speech, property rights, Second Amendment and gun rights, you can just go down the list."

So Many Constitutionalists Could Make a Huge Impact

As for the present batch of nominees awaiting confirmation or recently confirmed, Malcolm said, "I don't know everyone of these judges, but I know a lot of them and they are just an outstanding group of qualified men and women."

As strict constitutionalists, with many in their 40s and 50s, Malcolm suggested, "They will have a huge direction on the course of the law and hence on our democracy."

Many folks in this modern era have worried if the essence of the U.S. Constitution can survive.   But it's evident from the kind of judicial nominees he's picking to the sheer number of them, that President Trump is doing all he can to ensure constitutional law continues for years to come.