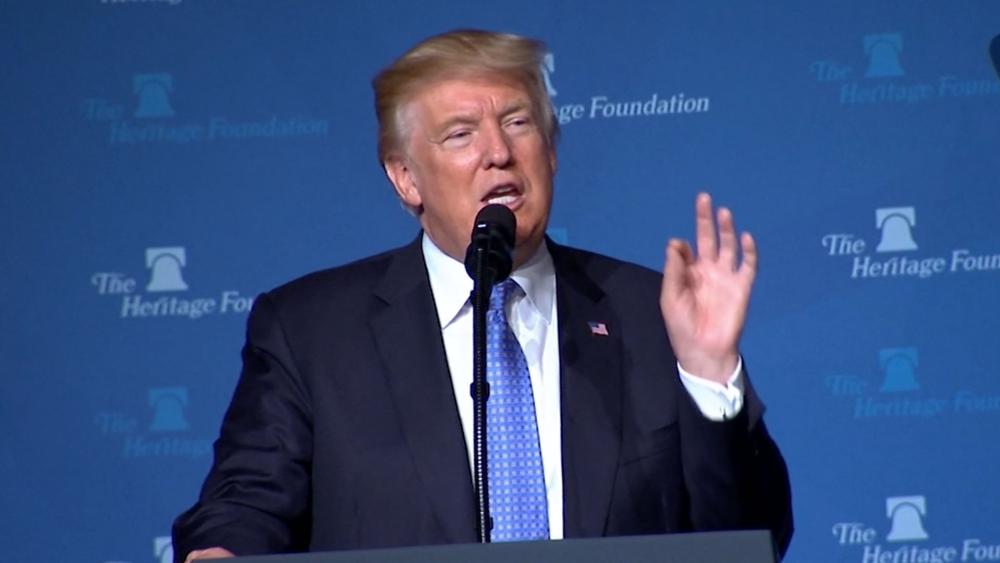 President Trump warned House Republicans on Sunday that failing to pass tax reform would mean failing in the 2018 mid-term elections.

In a conference call with lawmakers, he said his plan to slash the corporate tax rate to 20 percent and double the standard deduction used by most Americans is the right thing to do for the country.

During an interview on Fox Business with Maria Bartiromo, he stepped up the pressure, saying Americans want tax reform.

"It will be the biggest tax cut ever in the history of this country and I think there's tremendous appetite for it – tremendous spirit for it," he said.

The president and Republicans are desperate for a win. They control both chambers of Congress but have yet to repeal Obamacare or pass any significant legislation. Many in the party fear an all-out revolt by voters next year if tax reform fails.

To pave the way and speed up the process, House Speaker Paul Ryan says he wants to pass a revised Senate budget bill this week and ultimately accept a Senate tax bill. That would avoid negotiations between a House and Senate version that could drag out the process and even kill it.

White House Budget Director Mike Mulvaney told Fox News on Sunday, "We're hearing now that the House may pass the Senate amendments. That would save us 10 or 12 legislative days and that's a big deal."

The president has said he'd like to see the plan pass by the end of the year at the latest.

Trump also promoted the plan over the weekend in a USA Today op-ed piece. He cited an out-of-control tax code that has nearly tripled in length since the last tax reform in 1986. The code has since ballooned to 2,650 pages plus another 70,000 pages of forms, instructions, court decisions and other types of guidance.

The president also cited figures from the Tax Foundation which show that "taxes cost Americans more out-of-pocket than housing, clothing and food combined."

The president is facing pushback from deficit hawks on Capitol Hill who are worried that his tax cuts will add even more to the country's $20 trillion debt. They want to pay for the tax cuts by axing deductions or making tough spending cuts.

The president, however, insists that an expanding economy will save the day. "If we pick up one point on GDP," he told Bartiromo, "That's $2.5 trillion. It more than pays for everything."

There's also concern that the plan could cut the deficit-reducing pre-tax 401(k) contributions. The New York Times reports the White House wants to limit pre-tax contributions down to $2,400. The current maximum contribution is $18,000 for most workers and $24,000 for those 50 years or older. That could hurt how much Americans are saving for retirement and most analysts believe they're already not saving enough.

But Trump tweeted Monday morning: "There will be NO change to your 401(k). This has always been a great and popular middle class tax break that works, and it stays!"

There will be NO change to your 401(k). This has always been a great and popular middle class tax break that works, and it stays!