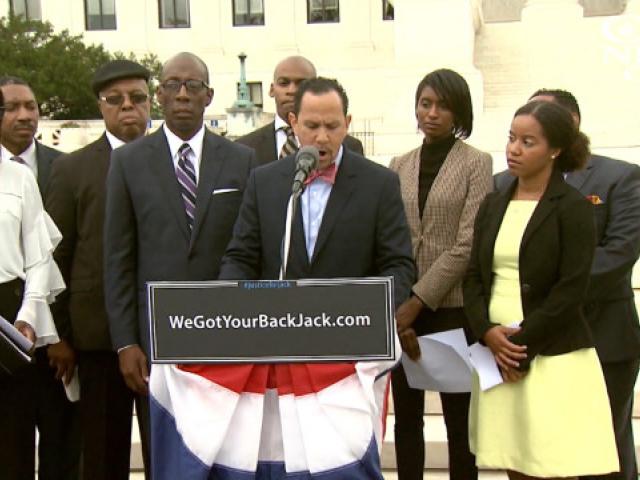 US SUPREME COURT — The issue of a baker who wouldn't make a cake for a gay marriage celebration is likely to be the biggest religious rights case in this Supreme Court term.

Those who oppose Jack Phillips and his Masterpiece Cake Shop accuse him of discrimination against gays. They insist it's like when segregationists in the Jim Crow days refused to serve blacks at lunch counters.

But now a group that really has suffered discrimination in America for centuries is coming out to back Phillips.   Monday, a coalition of African American civil rights leaders and advocates launched WeGotYourBackJack.com.

At a news conference outside the Supreme Court, they insisted that Jack Phillips' refusal as a Christian to provide a cake for a ceremony celebrating a same-sex marriage isn't even close to the kind of discrimination shown against African Americans in the past.

Janet Boynes lived as a lesbian for 14 years, but then turned away from it.

At the news conference, she said, "I am very concerned that the LGBT activists have hijacked the civil rights movement for African-Americans."

"The civil rights movement of the 1950s and '60s was a movement to secure for African Americans the basic privileges and the right of US citizenship that whites and others already had. Homosexuals, on the other hand, have always had the rights. They continue, however, to demand special rights based on their sexual behavior," she continued.

Rev. William Keen of the Southern Christian Leadership Conference said of the case involving Phillips, "This is based on a sin and a faith issue."

Keen argued that the real discrimination here isn't against gays, but religious believers.

"A person according to their faith should not be compelled to take part in what they believe is a sin," Keen commented.

Clarence Henderson of the Frederick Douglass Foundation of North Carolina stated of Phillips' foes, "Not only are they coming against him, but they're coming against the Constitution of these United States of America. Now they're trying to take away Jack Phillips' freedom of religion."

Bishop Garland Hunt of the Religious Liberty Coalition of Georgia told CBN News, "The First Amendment is clearly for our protection, those that are Christians and believers."

He said of cases like this one against Phillips, "If you don't allow a person to live by his conscience, you discriminate against the Christian."

And Henderson warned that limiting someone's freedom of religion goes against America's principles, saying, "When we start to infringe on another person's rights, then we have taken away the freedom that America offers."

Former lesbian Boynes concluded, "Sexual behavior is not the same as skin color. I could change from gay to straight, but I cannot change the color of my skin. It is an immutable, unchangeable characteristic. I resent my race being compared to what other people do in bed."

Those at the news conference pointed out all Phillips refused to do was bake a cake celebrating a same-sex marriage. He had willingly sold many cakes to many homosexuals over the years.