'How History Is Made': When a Conservative Lion Died, the Power of Prayer Raised up a 'Champion' 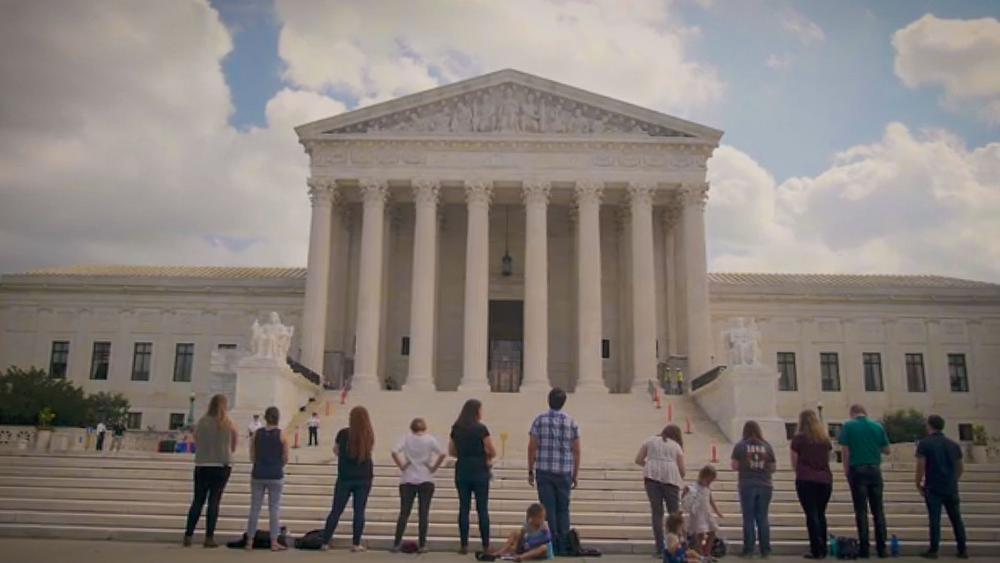 Intercessors in front of the Supreme Court
5593066555001
'How History Is Made': When a Conservative Lion Died, the Power of Prayer Raised up a 'Champion'

CAPITOL HILL – The U.S. Supreme Court always begins its new term on the first Monday of October. Some say the nine justices are the highest authority in the land.  But millions of prayer warriors believe every time they intercede for their nation, they're calling out to a much higher authority – One who rules the whole universe.

Take the group of intercessors who can often be seen outside the Supreme Court, the Justice House of Prayer, or JHOP.  For 13 years, the people at J-HOP have been praying right on Capitol Hill, just a matter of feet away from the law-makers and the judges of those laws.

"The Best Time to be Praying"

David Kubal, Intercessors for America CEO, stated, "Without a doubt, God accelerates His activity on the face of this earth through prayer. Otherwise, why else would He give us prayer?"

Intercessors for America is constantly webbing vast numbers of prayer warriors together via the internet, and asks them to fast and pray on the first Friday of the month.

"To pray specifically for the nation," Kubal explained. "Obviously, First Timothy, Chapter Two is our mandate: that we should pray for kings and all who are in authority."

But when praying about government and politics, Lockett suggested one of the toughest things is to see past your own prejudices and preferences so you can pray for God's will, not your will.

Not an Elephant or a Donkey, but a Lamb

Lockett said of the Lord, "We're not talking about an elephant or a donkey. We're talking about a lamb. And God has His own agenda. We have to find that."

But it can be found.  Lockett shared, "There are certain policy positions that we take in the prayer room. And that might sound controversial to some, but there are policy positions that we take because the Lord has shared His heart with us. I think that's important for intercessors – to get to a level of maturity where you know the difference between your own bias and the heart of the Lord."

He added, "Then we get the privilege to pray into it and see God's will made manifest in the earth."

And if that means using Donald Trump, so be it.

"I know he's not a perfect man, and he definitely needs our prayers," Kubal said, "but he is a man, I believe, who cares about spiritual things. Who is inviting prayer into his administration and encourages those around him to pray."

The Intercessors for America president pointed out, "There's a Bible study among Cabinet members on a weekly basis. That is amazing. I don't remember in recent history when that has been the case."

Giving intercessors a clap on the back, Kubal suggested, "The opportunity we have today with this new administration is, I believe, a result of prayer. For years and years, intercessors poured into the spiritual realm, into the heavenlies to see this opportunity provided for us."

'All Roads Lead Back to the Supreme Court'

Meanwhile, JHOP is concentrating on the Supreme Court.  Because battling abortion is a top priority for them, as they regularly pray in front of the high court, many wear tape across their mouths that says "LIFE." That symbolizes the unborn babies who can't speak out for their own lives to be spared.

But they pray about many issues because almost every issue sooner or later ends up before the nine justices.

The Mysterious Miracle of 'Neil'

One thing these intercessors have learned is that God moves in mysterious ways. They see that as the Holy Spirit often moves them to pray in ways or for things they don't understand at first, but which make stunning sense later.

It began with that extremely painful day for fans of Justice Antonin Scalia when that conservative lion of the Court died in February of 2016.

Scalia's Death: 'It Pierced My Heart'

"We loved him. He was great," Lockett stated. "It pierced my heart. I don't know how the rest of the prayer movement felt, I know it was a blow to us and I'm sure many of us."

There was fear President Obama would replace Scalia with a liberal and tilt the Court decidedly leftward. But that fear made the prayer warriors realize they were putting too much faith in man.

Robbi Harvell helps Lockett run JHOP. She remembered, "The Lord immediately turned it and it was like 'where is your hope, where is your trust?'"

"We really got confronted in those days," Lockett recalled, "Do we trust in man or do we trust in God? That was the big lesson of Scalia passing from the Court, is that we had to learn to trust God," Lockett said.

"The word was that God has a champion that He's ready to bring up to this empty seat," the JHOP leader recalled.

Lockett explained, "That was sliding into the election when everyone was 99 percent certain that Hillary Clinton was going to win the election. So you can imagine the pressure in the prayer room to hold onto a promise and to pray that into being."

"And we didn't know anything else except that God had a champion," Harvell said.

Then came Trump's victory and his new administration narrowing Trump's list of 21 possible nominees down to three.

Lockett recalled of that week, "One of the guys on our team just felt inspired one day to look and see what are the names of these three and what do their names mean?"

Harvell explained, "We'd been asking God to speak to us about a specific name to begin praying."

Lockett said the man doing the name-research came to him with an amazing revelation for the JHOP people praying all those months for the prophesied "champion."

"And there was a guy on the list named Neil Gorsuch. And he looks and the meaning of 'Neil' is 'champion.' Well, you can imagine, our faith exploded in that moment," Lockett said.

Harvell stated what this said to all of them: "God had actually spoken to us who the next justice was going to be a year prior and that we had been praying for him by name."

Jared Olsen is another full-time JHOP warrior who was on-hand for this revelation that "Neil" was the "champion."

"We knew from that moment on, Neil Gorsuch is God's choice for the empty seat," Lockett stated.

Lockett said of the young people at JHOP, "I teach them to not just read the headlines, but make the headlines."

Olsen added, "We'll be praying then watch the headlines using words we were just praying about.  And we're like 'this is incredible! God's actually answering our prayers!'"

"I can tell you so many stories where we've gone into the prayer room, brought our requests before God, and then the next day we see answers to the prayers in the headlines," Lockett stated.

'This is how History is Made'

Intercessors for America's David Kubal suggested if God is bringing a new or renewed urgency into your heart to intercede for the nation, go with it.

"There are men and women by the tens of thousands in this moment in time that God is putting a call on their life to be an intercessor for America," Kubal shared. "And that gives me great hope because I know God is going to do something great."

Lockett concluded, "I encourage our young people that this is how history is made, that history belongs to the intercessor."

Kubal said of God, "Any time He puts His people to praying, He's going to do something exciting. So watch out!"