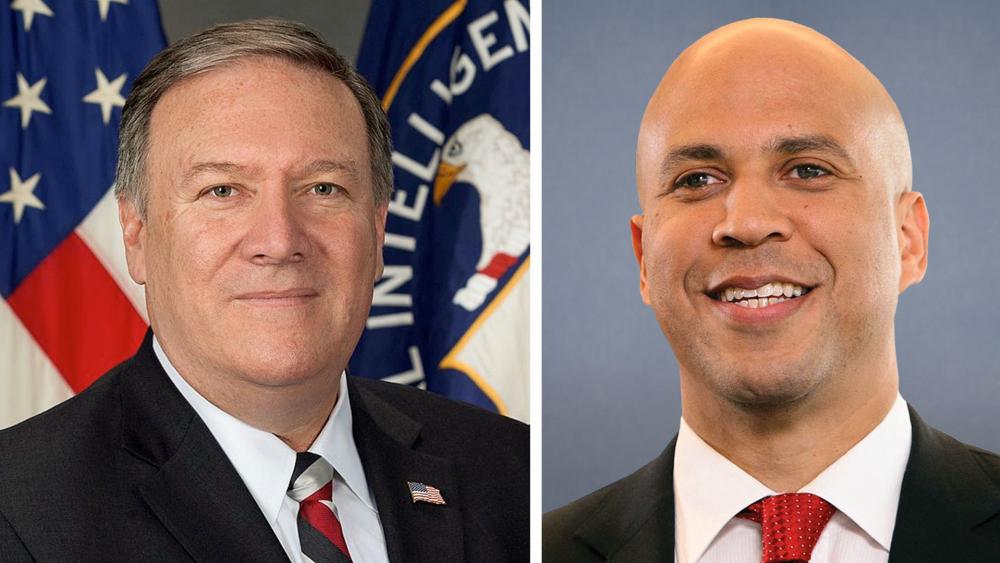 Sen. Cory Booker (D-NJ) says he will not vote for President Trump's nominee to head the State Department, singling out the nominee's Christian views on sexuality.
"Do you believe that gay sex is a perversion?" That was the question directed at CIA Director Mike Pompeo last week during his Senate confirmation hearings to become the next secretary of state.
Then on Facebook, Booker implied that people with biblical views, like Pompeo, are responsible for depression and social problems among homosexuals.
"At a time when suicide rates for gay youth are painfully high; at a time when gay youth make up an unacceptable level—40 percent—of homeless youth; ...what does it mean that we elevate a man to be our Secretary of State—4th in line to the presidency—who believes that a gay youth is a perversion?"
Because of his statements, Booker is now being accused by faith leaders of violating the US Constitution.
Here's what Booker asked Pompeo in Congress about his beliefs on same-sex marriage:
Booker: "Is being gay a perversion?"
Pompeo: "Senator, when I was a politician, I had a very clear view on whether it was appropriate for two same-sex persons to marry. I stand by that."
Booker: "So, you do not believe that it's appropriate for two gay people to marry?"
Pompeo: "Senator, I continue to hold that view."
Booker: "And so, people in the State Department, I've met some in Africa who are married, under your leadership, you do not believe that that should be allowed?"
Pompeo: "I believe it's the case we have married gay couples at the CIA. You should know, I treated them with the exact same set of rights..."
Booker: "Yes or no -- do you believe gay sex is a perversion?"
Pompeo: "Senator, I'm going to give you the same answer I just gave you previously. My respect for every individual, regardless of sexual orientation, is the same."
Breitbart reports that conservative and Christian leaders are now accusing Booker of violating Article IV of the US Constitution which states, "No religious test shall ever be required as a qualification to any office of public trust under the United States."
The Family Research Council has launched a petition protesting Senator Booker's "Religious Test on Presidential Nominees." The petition states that "Americans should never be forced to choose between their faith and public service."
The targeting of a nominee's biblical views is not new for liberals in Congress.
Last year, Sen. Bernie Sanders (I-VT) attacked Russ Vought, a Christian and a nominee to be deputy director of the Office of Management and Budget, for his orthodox Christian beliefs.

And Democratic Sen. Diane Feinstein opposed the nomination of Amy Coney Barrett of Indiana to be a US circuit court judge. Feinstein said her religious beliefs were too prominent in her life.

Senator Booker's office did not respond to a request for a comment. But on his Facebook page,  Booker said of Pompeo, "He and I are Christians. We believe in the ideal and mandate: Love thy neighbor. There are no exceptions to this."

'Do You Believe Gay Sex Is a Perversion?' Pompeo's Christian Views on Trial in Senate