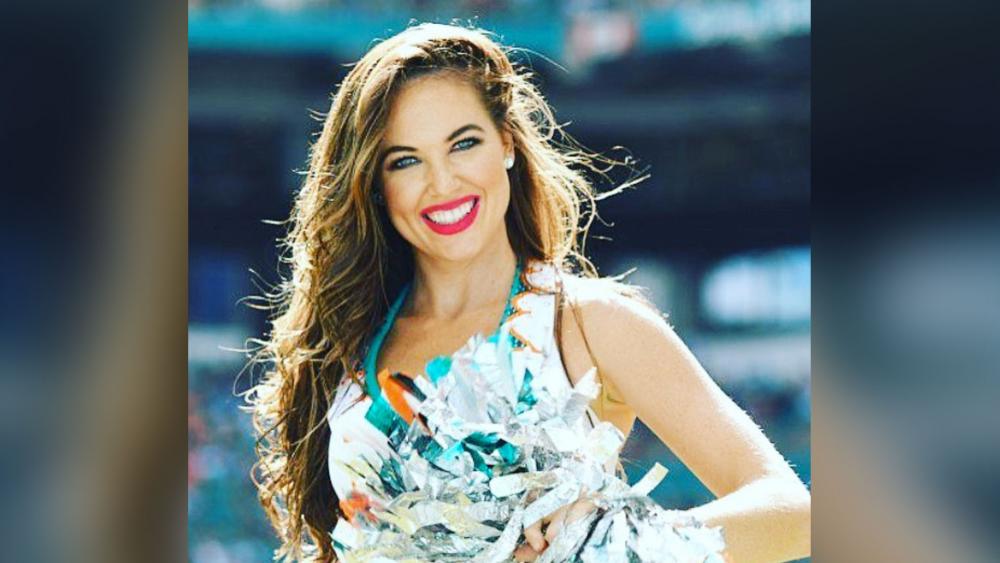 A former NFL cheerleader for the Miami Dolphins has filed a discrimination lawsuit against the team and league Thursday claiming she was treated differently because of her Christian faith.

"I knew that my pain was going to end up being for God's purpose and I just had to trust in His timing," Kristan Ware told CBN News.

Ware spent three seasons cheerleading with the Dolphins before quitting in the spring of 2017 according to a New York Times article.

•There comes a time in everyones life when we are faced with a decision that changes everything. After a lot of prayer and trusting what I believe God put on my heart, I made the decision not to return as a 4th year Miami Dolphins Cheerleader. For me, this decision was first and foremost about being obedient to God, living faith to faith and having the courage to always stay true. ••• •I am forever grateful for this position and platform to spread joy all over the world and make a positive difference in my community and our military overseas. This experience brought alive the connection I cherished from growing up in a military home. Traveling to so many countries on 5 military tours was heart filled and rewarding. Giving back and showing love and genuine appreciation to our brave men and women filled my heart with the most joy. I've met beautiful people with hearts of gold who have made a special impact in my life and relationships that will last forever. ••• •These three years have helped shape me into the woman I am today and I am blessed to say that now, more than ever before, my faith is stronger. I am so excited about where God is leading me next. ••• •I want to share my heart with so much love and give a huge and meaningful THANK YOU, with tears of happiness, to everyone who believed, encouraged, shared God's word of truth and supported me throughout this journey. Thank you to my family, friends, the @miamidolphins @dolphinscheer organization AND of course, to the faithful fans for your enthusiasm, cheerful noise and all the motivation you provided. Without you, @hardrockstadium wouldn't be the same! God Bless you and thank you! Wishing the beautiful, hopeful cheerleaders an amazing time at auditions tomorrow. Shine from within! #GlorytoGod #HeLeads #faith #joy #spreadlove

Ware filed a complaint with the Florida Commission on Human Relations saying her faith made her "a target of discipline, ridicule, harassment, and abuse."

"I gave my life to Christ and it's like I had this weird target on my back," she told CBN News. "It was so strange."

In Apri 2016, Kristan had gotten baptized two days before her annual work review with the cheerleading squad and she said that's when everything began to change.

Ware says during that interview, cheerleading director Dorie Grogan questioned her about her personal choice to save sex for marriage.

"As far as we are concerned, you have taken something that was once upon a time pure and beautiful and you've made it dirty," Grogan told her, the Washington Post reported.

"I think it is still beautiful, but you need to stop talking about it," team choreographer Brooke Nix reportedly added.

She was also warned by the coaches to not discuss her virginity with the team.

"She said 'your too sensitive, your too emotional, we are just trying to help you develop into a woman," Ware recounted to CBN News of Grogan. "That's when I sat there and said wait, 'A woman of God or a woman of the world?"

In a complaint filed against the Dolphins and the NFL with the state labor board, Ware says she continued to face hostility and retaliation for her gender and beliefs.

One incident occurred during a fashion show where Ware wore a bathing suit in a manner Grogan didn't like. According to the complaint, Grogan yanked on the straps of the suit until Ware's skin became red and irritated and called her a "child."

Kristan said during that time she really leaned on the Lord and other Christian teachings.

"Anytime I got told a negative comment within that year about my virginity or my faith, I was able to replace it with Truth."

Ware even said in the Washington Post report that most of her religious references were removed from a blog post she wrote for the team.

The former cheerleader believes that football players are held to a different standard when it comes to their religious beliefs.

"I see football players expressing their faith without limitations and praying on the touchdown line and they point up and give glory to God; but, me as a cheerleader I wasn't allowed.

Ware remained on the team for one more season before quitting in the spring of 2017, but it would take her an entire year to share her experience because of the emotional and physical distress.

'For Such a Time As This'

"It took me a really long time to heal after I chose to leave the Dolphins," she told CBN News. "I was still kind of trapped in those chains of silence...We were told to be seen and not heard and for a while, I believed that my voice and my opinion did not matter."

She said God gave her Esther 4:14 encouraging her to speak out and be a voice for others suffering in silence.

"For if you remain silent at this time, relief and deliverance for the Jews will arise from another place," it reads in part. "And who knows but that you have come to your royal position for such a time as this?"

"It spoke volumes to me and I was like 'wow, my voice does matter'," the former cheerleader said.

Sara Blackman, Kristan's lawyer, said a number of cheerleaders in the league suffer in silence.

Blackwell adds that she believes God is working on Kristan's behalf.

"We've been asking the NFL just to give the cheerleaders a voice and for the women to speak out," she said "We want the NFL to listen to the cheerleaders and make their work environment free of discrimination and free of harassment.

She added that they are not aking them to change what they do, but they are simply requesting a meeting with NFL commissioner Roger Goodell.

So far, an NFL spokesman Brian McCarthy released a statement that the league maintains equality for both male and female employees.

"The N.F.L. and all N.F.L. member clubs support fair employment practices," he said. "Everyone who works in the N.F.L., including cheerleaders, has the right to work in a positive and respectful environment that is free from any and all forms of harassment and discrimination and fully complies with state and federal laws. Our office will work with our clubs in sharing best practices and employment-related processes that will support club cheerleading squads within an appropriate and supportive workplace."

Meanwhile, Kristan is encouraging young people to stay strong in the Lord and not compromise their values.

"I want them to know that they're not a problem and there is nothing wrong with them, but they have a protected purpose," she said. "There is a reason in your waiting. You are not waiting until marriage you are walking in purpose until marriage."

"When you have something in you that threatens the enemy he is going to try to attack you and you have to be strong and replace his lies with God's truth," Kristan added. "Our worldly watch may say 'single' but our unwavering walk for Christ says purpose."