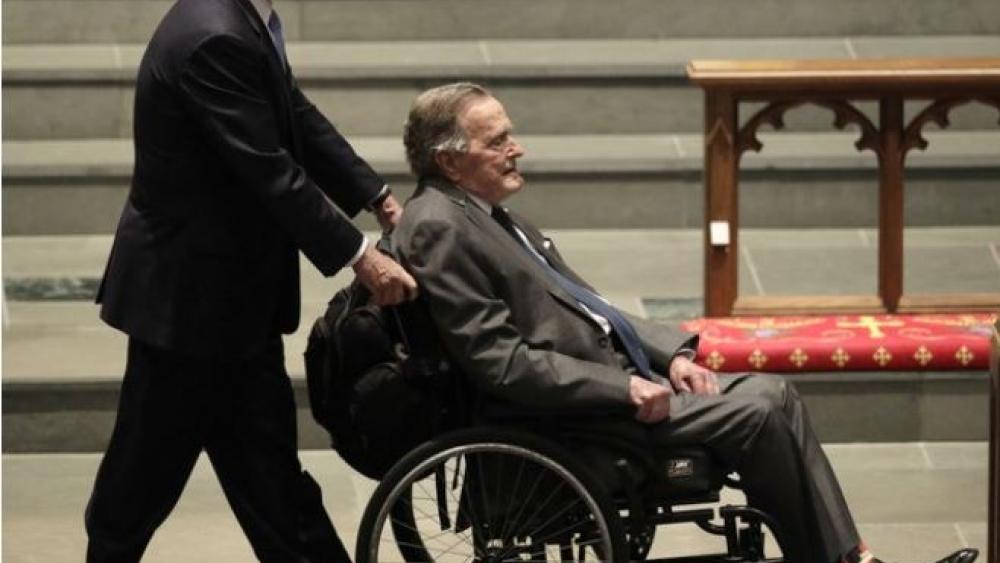 HOUSTON (AP) — Former President George H.W. Bush was moved out of intensive care and into a regular patient room at a Houston hospital on Wednesday as he recovers from an infection that required his hospitalization a day after his wife’s funeral, a family spokesman said.

The nation’s 41st president is expected to remain at Houston Methodist Hospital for “several more days,” spokesman Jim McGrath said. Bush, who is 93, is being treated for an infection that spread to his blood.

“He is alert and talking with hospital staff, family and friends, and his doctors are very pleased with his progress,” McGrath said in a statement.

He noted that Bush was more focused on the Houston Rockets playoff series against the Minnesota Timberwolves “than anything that landed him in the hospital.” Bush, frequently accompanied by his wife, has long been a fixture at Houston sporting events.

Bush was hospitalized on Sunday, a day after he attended the funeral and burial of his wife, Barbara. Married for 73 years, the Bushes were the longest-married presidential couple in U.S. history. Barbara Bush was 92 when she died on April 17 at their Houston home.

Bush sent a tweet earlier Wednesday thanking Houston for its “professionalism and obvious care” during the memorials and services for his wife. He specifically cited Houston Mayor Sylvester Turner, the city’s police and transit agency “and really all Houstonians” for “making Barbara’s visitors and funeral guests feel so welcomed.”

He also thanked St. Martin’s Episcopal Church, where the funeral was held and where he and his wife worshipped for years, and Second Baptist Church, which served as a staging area a few miles away for city buses that carried thousands of visitors to St. Martin’s for a public viewing a day before the funeral.

McGrath said the former president is thankful for everyone sending prayers and good wishes.