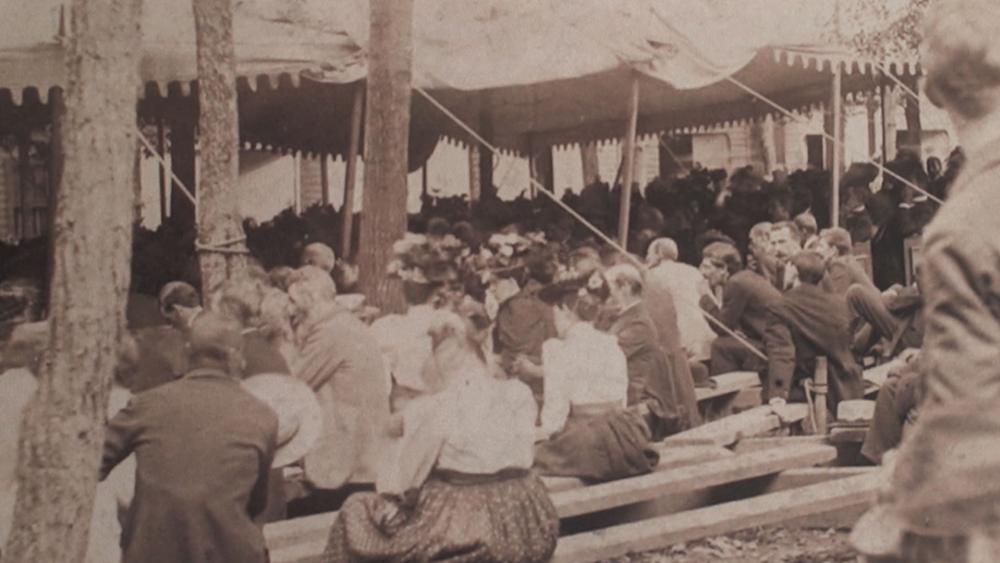 HOLLOW ROCK CAMP, Ohio – During America's early days, frontier settlers were so spread out, there weren't many churches. So preachers called circuit riders rode from home to home to spread the gospel.  But they became such popular gatherings, thousands of people started to show up. So out of necessity, they began to meet in forests and fields.

These circuit riders had lit the fire that became America's Second Great Awakening.  Those thousands attending would pour in from so many miles away, they'd have to camp out.  So these gatherings began to be called camp meetings and Bible camps.

Meeting Every Summer for 200 Summers

One that began in 1818 in an Ohio valley by a creek known as Hollow Rock is now the only Bible camp in America that's met every single summer for 200 years.

Of course, back in the 1800s, it was a lot harder to get to this Ohio camp.  Back then, the road ran right along the Hollow Rock Run and those coming had to ford it seven times to get to the campground in their wagons or buggies.

And when they did, they'd probably be sleeping out on the open ground, maybe on some straw. And the problem was, it would often rain and there were poisonous copperhead snakes moving from the creek on over to the campground.

So the many families that came every summer began to build cottages and they financed the building of several dormitories. Now the valley is packed with more than 100 of these cottages.

Sheron Brookes Woodruff has been coming here 75 years and her ancestors long before that.

"My grandmother actually came in a horse and buggy," she told CBN News.

It was the same for Lynn Campbell's ancestors.

She stated, "My grandmother's grandparents came out here, and generation after generation."

Secret: They Hand it Down

Traveling evangelist Lane Loman's father preached here 15 different years, and Lane is drawn back over and over.

He said of the camp's success, "What the secret is: they hand it down to the next generation."

Rev. Mel Truex has presided over the camp since 1977.

"This will be the eighth or ninth generation of families that have made this place what it is," he explained.

When CBN News asked camp goers how old they were when they first came to Hollow Rock, many answered, "In the womb."

The Bell Rings, Everybody Prays

At three tabernacles, half-a-dozen services bring the faithful together to worship and hear the Word each day.

And at 1:15 p.m. without fail, the camp bell rings out and everyone stops what they're doing to pray for several minutes.

Many have met Jesus Christ here; many have let Him heal their broken lives. Truex remembers what happened right after the conversion of one man whose marriage had fallen apart.

Truex recalled, "And he said, 'Oh my, there's my wife that I've separated from.' And she found Jesus, too.  And they met together, and in a few months they remarried."

Prayer circles often break out to take needs to the Lord.

Campbell stated, "Everybody here loves and accepts you. You can share things and you know when people say, 'I'm praying for you,' they ARE praying for you."

Kids and teens love coming, even if they're cut off from their usual online life.

No Computers, No Pool, but Soaking in His Presence

Woodruff explained, "We don't have a pool, we don't have internet, they can't play their games."

But she said they feel what the adults feel: "We're so concentrated on seeking God's will that His Holy Spirit will just permeate this place in such a way that we do feel like we're on holy ground.  There are times you want to just kick your shoes off and say, 'God, I know You're here!'"

Campbell remembered as a kid she could hardly wait to get back to Hollow Rock.

"I packed a week before camp. I was ready to come!" she exclaimed.  "It's nice to unplug from the world and to get rejuvenated spiritually. And it really sets the tone for the rest of the year."

One lifelong camp goer told CBN News he offered his kids Disney World or Hollow Rock one summer. They all shouted, "Hollow Rock!"

Truex said of such camp goers, "I see a hunger, a new hunger, especially in young people for something that's going to take them beyond just going to church, just being a nice person. But wanting to be holy, and wanting to be right with God and live in the peace that He brings."

Which means they've come to the right place because this camp's main emphasis for these 200 years has been preaching and teaching on holiness.

Truex explained that's because, "God said, 'be ye holy for I am holy.'"

Loman spoke of the benefits of holiness in a relationship between God and His children.

"We receive freedom from the power of sin. That's what we get in that beautiful relationship that's untainted by any essence of sin in our lives," he told CBN News. "We can actually choose to live above willful sin. And that's freedom."

"That's the essence of holiness," Woodruff added. "It's just totally died out to self and things that would distract from having that relationship with Him. You want Him to guide. And when you find that relationship, you realize His ways are the best.  Why would I try to tell an awesome God how He ought to do it?"

"We're talking taking it to the next level with the Lord," Loman stated. "Allowing Him not only to be your Savior but to be your Lord as well."

Clearing the Path to Your Heart

"It means that there's nothing I hold back from the Lord," Woodruff explained about this walk of holiness. "He has every part of me that He could have, whether it's material possessions or my family. He has all of my heart. There's nothing that I want except Him to have me fully and me to have Him fully."

Loman added, "As He speaks to us: 'will you let Me have that?' we reply, 'Of course, I surrender that if it's in the way of my relationship with You.'  So then we get that kind of intimate personal relationship with Him that we don't have when we're about our own agenda instead of His."

But Loman pointed out it takes two things: a hunger for God and the power of His Holy Spirit.

"Develop a hunger for God, there's no end to what God can do," the traveling evangelist said.

As for the power of the Holy Spirit, Loman spoke of Jesus and His earliest followers, saying, "They had already accepted Him as Messiah.  He said, 'Now you tarry in Jerusalem. Because you don't have what it takes to do what I've told you to do.  You're going to have to wait until you're endued with power. Wait for the power of the Holy Spirit.' And the day of Pentecost, they received that promise. And they truly were different post-Pentecost than they were pre-Pentecost."

Recipe for a Third Great Awakening

Truex said of this holiness, hunger and Holy Spirit, "The message of this camp is what can transform our world and our nation."

"That's going to be the recipe for a Third Great Awakening," Loman added. "The Bible says that 'in the last days, I will pour out My Spirit upon all flesh.' We believe that's the great need of Christianity and the great need of the world today."

Those at Hollow Rock do seek to change the world for Christ. In the meantime, they're happy to bask in what's right here.

'That Calming Sense: God is Present'

Thickly wooded forest surrounds them with massive trees looming in every direction.

In the center of the camp, a couple of dozen cottages face one another around a large grassy square. It's filled with playground equipment covered in kids scampering all over it.

In the day, the teens play organized games across a massive field and then gather in their own tabernacle for worship pulsing with the beat of drums and electric guitar.  Then at night they move to the main tabernacle and become a massive choir leading the adults and children in worship.

You can study what it looks like at hollowrock.org and click here  to study its history and download a PDF copy of the book, Hollow Rock: a History.

There's just something about this place," Campbell stated. "When you walk onto the campus, you just have that peace, that calming sense: God is present and is here."

When he was near death and could no longer come here physically, he sent letters that were read aloud to the entire Hollow Rock congregation in the main tabernacle.

In one of his last, he wrote, "Tell the trees, the hills, the rambling little creek, the bubbling springs that the old preacher loves them very much. They are like music in my memory."

It's now a special music that's played here every single year for a solid 200 years.