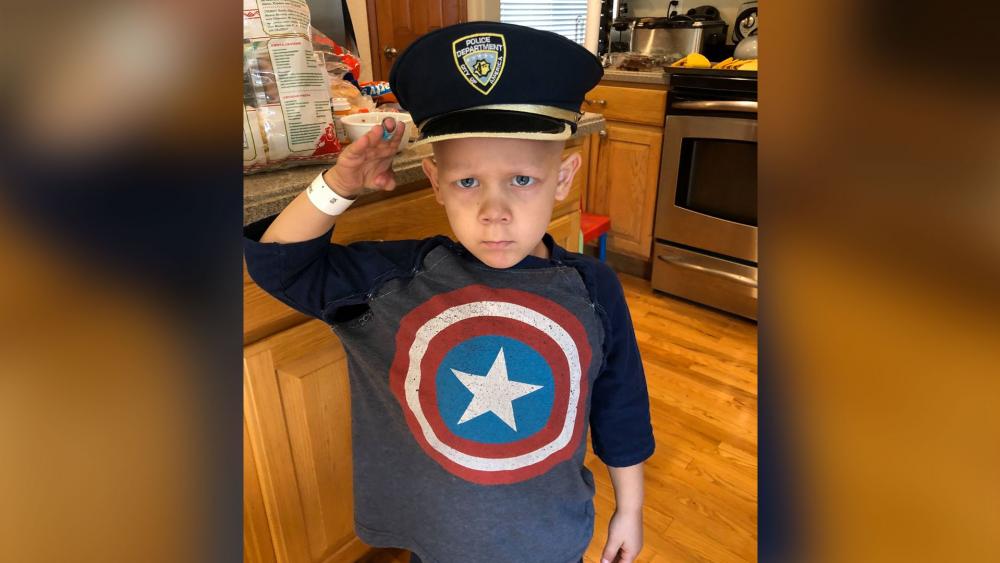 The heartwarming story of a Colorado police department making a young boy suffering from cancer an honorary officer just keeps getting better.

On Sunday, 4-year-old Joshua Salmoiraghi, who has been battling Stage 4 kidney cancer, finished his last round of chemotherapy.

Joshua celebrated the milestone with a victorious bell-ringing at the Children's Hospital Colorado in Aurora surrounded by family and hospital staff.

The Colorado Springs Police Department, who has been following Joshua's journey and posting updates, shared the exciting moment on Facebook Sunday.

In April, the department officially "swore in" Joshua with a full custom-made uniform and a mini motorcycle just for him the day before he started the six-month-long chemo treatment.

Fox 31 reports Joshua was first diagnosed in June 2017. Doctors removed an 11-centimeter tumor from his left kidney, and he went through his first round of radiation and chemotherapy treatment.

In December of last year, doctors determined Joshua to be in remission, but one month later doctors found another tumor in his left lung, leading to the latest round of chemo.

Joshua's father, Joseph, is a military veteran and pastor. He has been posting updates on his son's treatment on Facebook and always asks for prayer.

Joseph even live-streamed the moment the nurse took Joshua's chemo tube out and used the hashtag "it is finished."

"We got to ring the bell in December last year and then the cancer came back," Joseph said in the video. "We're hopeful that this bell ringing will be it. We hope it never comes back, never ever ever."

Joshua will still have to undergo radiation therapy for his chest in the coming weeks. His family continues to ask for prayers.