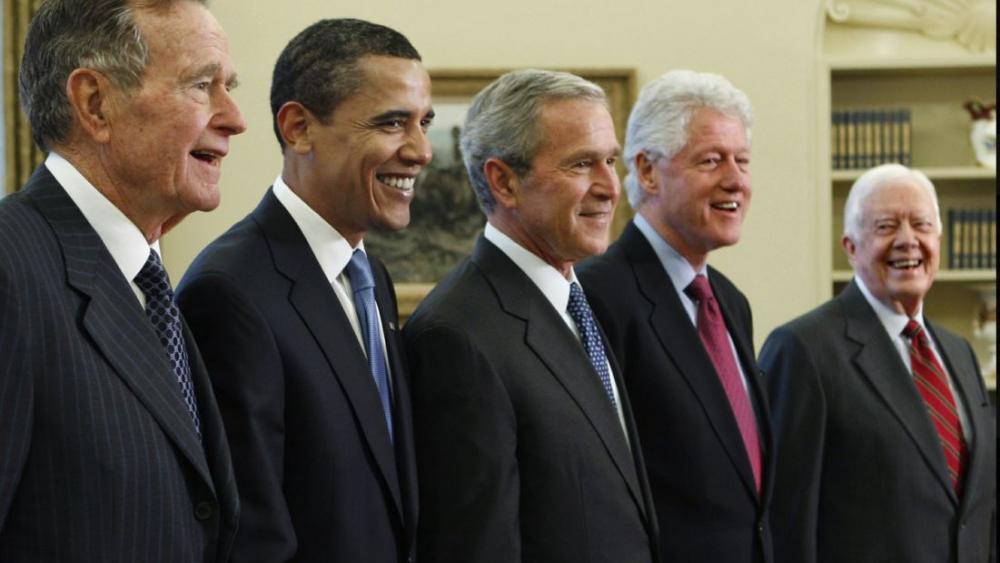 "Our deepest condolences to the family of George H.W. Bush, who passed away late yesterday at the age of 94. President and Mrs. Bush were very close friends of my parents and our family through the years. He represented the presidency when politics in our country was more civil. He was a man of character who served our nation during war and led our nation during peace. He was a man of many accomplishments, but one of the greatest was his family—two sons to serve as governors and one to follow as president of our nation. Our prayers are with the entire Bush family." -- Franklin Graham, son of the late evangelist Billy Graham

"President George H.W. Bush leaves behind a seemingly irreplaceable void in the fabric of America's political landscape. He was a decorated war hero, venerated statesman, devoted father and loving husband. While all of this is true, it falls well short of paying proper tribute to the total sum of a man whose legacy is quite literally unparalleled in modern American history." -  Rev. Samuel Rodriguez, president of the National Hispanic Christian Leadership Conference

"Waking up to the sad news of the passing of fmr Pres George HW Bush at age 94. A true statesman, war hero in WWII, servant of God and country and patriarch of great family. Heartfelt condolences to his family.' -- former Arkansas Gov. Mike Huckabee via Twitter.

"George HW Bush was truly one of the greatest Americans of our times and all times. He lived his life with joyous faith and optimism and leaves a lasting influence upon the world. May God comfort His family with peace and grace. We are a grateful nation for his magnificent life." - Jack Graham, pastor of Prestonwood Baptist Church in Plano, Texas.

"American hearts are heavy as we bid farewell to President George H.W. Bush. Today, George and his beloved Barbara are together, enjoying a well-deserved rest from their labors." -  Sen. Ted Cruz (R- Texas)

"Karen and I were saddened to learn of the passing of President George H.W. Bush and we send our deepest sympathies to the entire Bush family. President Bush loved his family, loved this country and his legacy will be a lifetime of service to the United States of America. We send our prayers & deepest condolences to the entire Bush family. We join them & the American people in mourning the passing of this good & great man. His example will always inspire and his lifetime of service will be enshrined in the hearts of the American people forever.​​​​​​​" - Vice President Mike Pence