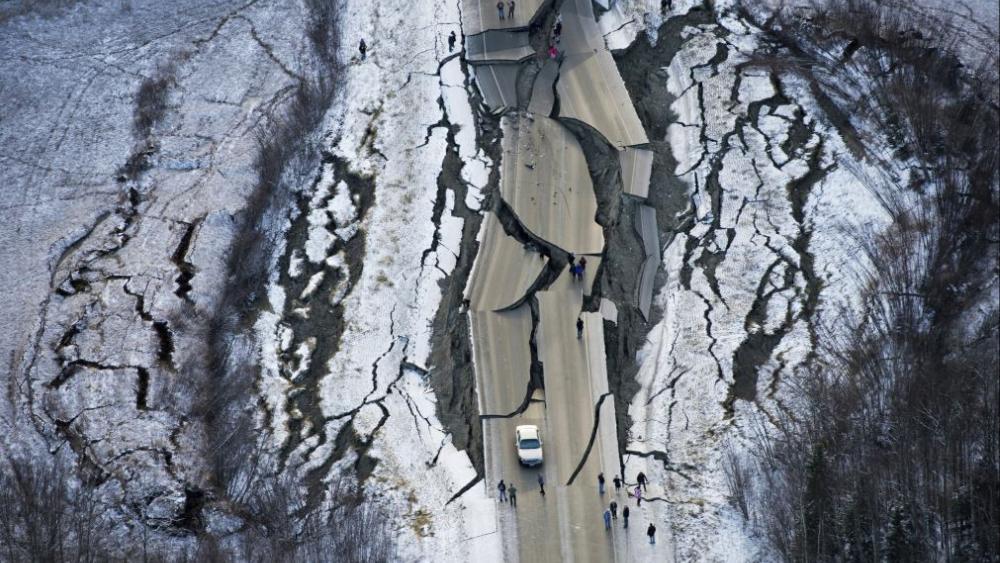 ANCHORAGE, Alaska (AP) — Chris Riekena was driving his 7-year-old son to school when his car started acting up. As he pulled over, he realized the problem wasn’t his car — it was a huge earthquake.

Riekena turned around to calm his son in the back seat and when he looked forward again, the road ahead of him was sinking into the earth. He pulled his son out of the car as light poles along the road swayed.

By the time the shaking stopped Friday, the car just in front of his on the freeway was marooned on an island of asphalt with a huge chasm on both sides.

“It was probably a good 30 to 40 seconds of slow-motion disaster,” said Riekena, an engineer with the Alaska Department of Transportation who later returned to the site for his job.

“Thankfully I pulled over when I did,” he said. “I’ve walked around the site enough over the last few hours that I’ve replayed that a few times.”

Back-to-back earthquakes measuring 7.0 and 5.7 cracked highways and rocked buildings Friday in Anchorage and the surrounding area, sending people running into the streets and briefly triggering a tsunami warning for islands and coastal areas south of the city.

No tsunami arrived, and there were no reports of deaths or serious injuries.

Aftershocks Saturday continued to fray nerves. U.S. Geological Survey Geophysicist Paul Caruso said there have been 545 aftershocks, including the 5.7 magnitude shaker that came almost immediately after Friday’s big quake. Eleven have had magnitudes of 4.5 or greater.

The aftershocks should be weaker and less frequent in the coming days, but officials can’t say for sure when they’ll stop, Caruso said.

The USGS said the first and more powerful quake was centered about 7 miles (12 kilometers) north of Anchorage, Alaska’s largest city, with a population of about 300,000. People ran from their offices or took cover under desks. The 5.7 aftershock arrived within minutes, followed by a series of smaller quakes.

“We just hung onto each other. You couldn’t even stand,” said Sheila Bailey, who was working at a high school cafeteria in Palmer, about 45 miles (72 kilometers) from Anchorage, when the quake struck. “It sounded and felt like the school was breaking apart.”

Anchorage Police Chief Justin Doll said he had been told that parts of Glenn Highway, a scenic route that runs northeast out of the city past farms, mountains and glaciers, had “completely disappeared.”

Flights at the airport were suspended for hours after the quake knocked out telephones and forced the evacuation of the control tower. And the 800-mile (1,287-kilometer) Alaska oil pipeline was shut down for hours while crews were sent to inspect it for damage.

Anchorage’s school system canceled classes and asked parents to pick up their children while it examined buildings for gas leaks or other damage.

Jonathan Lettow was waiting with his 5-year-old daughter and other children for a school bus near their home in Wasilla, about 40 miles (64 kilometers) north of Anchorage, when the quake struck. The children got on the ground in a circle while Lettow tried to keep them calm and watched for falling trees.

Soon after the shaking ended, the school bus pulled up and the children boarded, but the driver stopped at a bridge and refused to go across because of deep cracks in the road, he said.

In Kenai, southwest of Anchorage, Brandon Slaton was soaking in his bathtub when the earthquake struck. The temblor created a powerful back-and-forth sloshing that threw him out of the tub, he said.

His 120-pound (55-kilogram) mastiff panicked and tried to run down the stairs, but the house was swaying so much that the dog was thrown into a wall and tumbled down the stairs, Slaton said.

Slaton ran into his son’s room after the shaking stopped. The boy’s fish was on the floor, gasping, its tank shattered. Slaton put the fish in a bowl.

“It was anarchy,” he said. “There’s no pictures left on the walls, there’s no power, there’s no fish tank left. Everything that’s not tied down is broke.”

Alaska was the site of the nation’s most powerful earthquake ever recorded. The 9.2-magnitude quake on March 27, 1964, was centered about 75 miles (120 kilometers) east of Anchorage. It and the tsunami it triggered claimed about 130 lives.

The state averages 40,000 earthquakes a year, with more large quakes than the 49 other states combined. Southern Alaska has a high risk of earthquakes because the Earth’s plates slide past each other under the region, but it is rare for a quake this big to strike so close to such a heavily populated area.

David Harper was getting coffee at a store when the low rumble began and intensified into something that sounded “like the building was just going to fall apart.” He ran for the exit with other patrons.

“People who were outside were actively hugging each other,” he said. “You could tell that it was a bad one.” 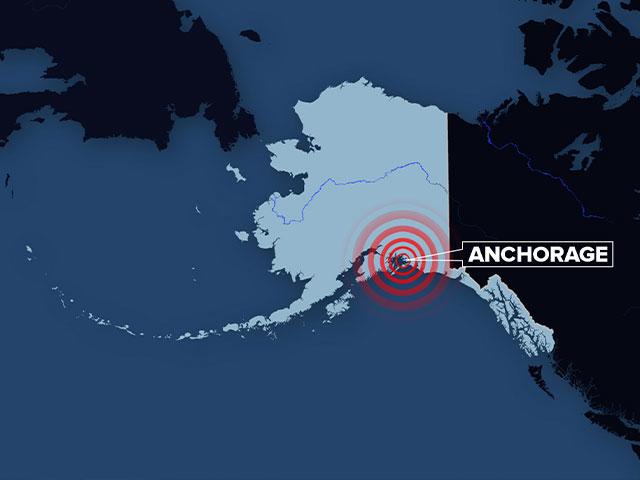