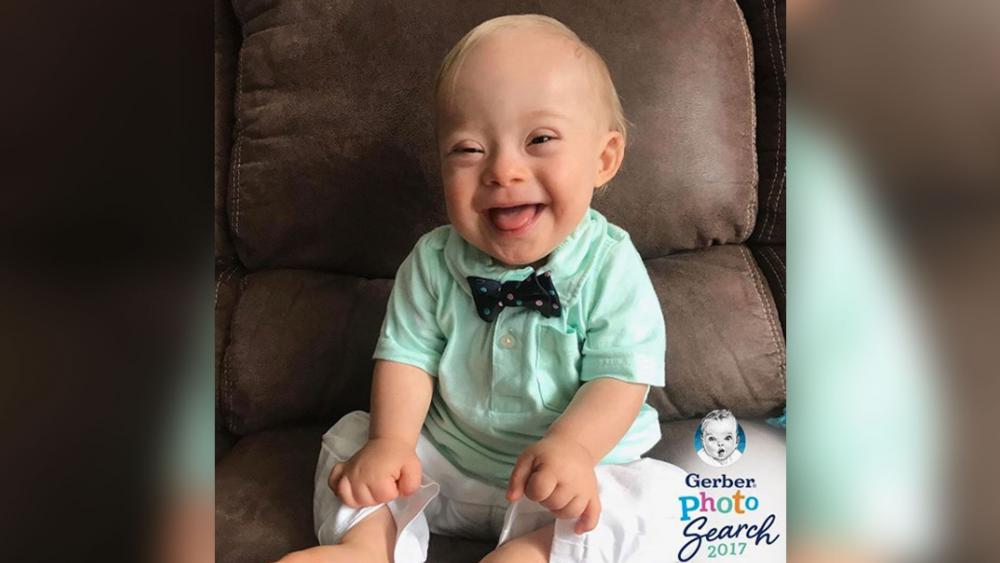 The Gerber company may have done more this week for the pro-life movement and people with Down syndrome than it ever anticipated.

Advocates for people with Down syndrome and those fighting abortion are thrilled with Gerber's historic decision to choose one-year-old Lucas Warren as its "spokesbaby" of the year. He is the first Gerber spokesbaby with Down syndrome in the company's 91-year history.

Gerber chose little Lucas over 140,000 other babies. His reward? $50,000 and the opportunity to appear on Gerber social media posts and advertising throughout the year.

His mom, Cortney Warren, says she hopes her son's new prominence will encourage acceptance of kids with disabilities.

Jeanne Mancini, president of March for Life, told CBN News "by continuing to recognize babies like Lucas, it is our hope that society will stop seeing these special children as choice."

Jim Daly, president of Focus on the Family, said that pictures of Lucas could challenge worldwide attitudes that accept and even advocate aborting unborn children with disabilities.

"Images have the power to revolutionize and transform hearts and minds," he told CBN News.

Focus on the Family analyst Brittany Raymer points to studies that show anywhere from 67-90% of unborn babies with a positive test for Down syndrome are aborted in the US. That's led to the population decreasing by 30%. In other countries, the abortion rate for Down children is even higher. It's 90% in the United Kingdom, 98% in Denmark and close to 100% in Iceland.

Many believe that the newly developed noninvasive prenatal screening (NIPS) technologies have encouraged these abortions since they became available in 2011.

The Charlotte Lozier Institute, the research arm of the pro-life Susan B. Anthony List, predicted in 2015: "If prenatal screening becomes more widely available, as seems to be happening, then one would expect the number of terminations to increase."

That concern over the future of unborn children with Down syndrome has pro-life advocates like Kristan Hawkins, president of Students for Life of America, optimistic about the changes that Lucas could bring. "Gerber should be commended for recognizing what we in the pro-life movement have celebrated for years, the incredible worth of all life, no matter the perceptions of someone else's abilities," she told CBN News.

Hawkins said she's already excited to see images of Lucas everywhere she goes.  "I look forward to seeing his beautiful face in my grocery store," she said.