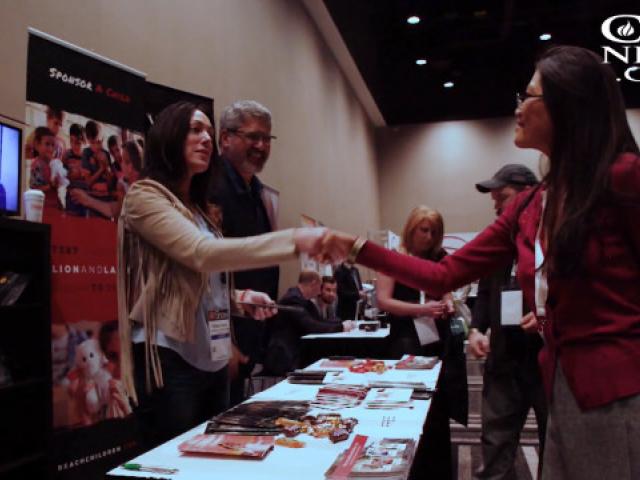 A Christian ministry's display is the last thing you'd expect to see at an international adult film conference in Las Vegas, but for Victor Marx it's the perfect place to reach those trapped in one of the darkest industries.

Marx founded All Things Possible Ministries (ATP), which helps broken, troubled, and trafficked youth around the world. He's even rescued children in ISIS-torn Iraq and Syria.

"We decided to buy a booth here and present our organization as a trauma-based organization helping kids who were affected by ISIS," he told CBN News. "But we found out here, many of the actors and people in this is industry, many young gals have been sexually abused," Marx said.

The team gave away the ministry's movies, books, and powerful stories of redemption for free.

"There's been no shortage of people who, not only come here, but end up taking pictures with us. We're talking key people in the industry from producers, to actors and actresses, to their fan base. It's been pretty amazing," he said.

"There's one gal who stopped by our booth and she's a cam artist where she, you know, uses the web cam. She told me this...the thing she struggles with the most is rejection," he explained. "We've been able to reach her."

The team was at the convention for three days and used everything from movies to a dog to attract those who are hurting and broken.

"We've also got our dog Scout who is a magnet to so many of the sex industry workers," Marx explained. "Many of the workers wanted to pet and take pictures with Scout...that opens up our conversation."

"We walked by booths that had very young looking women who were posing and allowing photos to be taken. One girl, (she looked like she was 12), was posing next to her life size poster.  We got her attention with Scout.  We got her away from her table for a moment so we could talk with her.  She knelt down and petted Scout. We told her briefly that Scout helps young women who have been abused and traumatized by ISIS.  She hugged Scout and looked at us like she wanted to tell us something, but couldn't. I'm sure her handler was close by and watching his property like a hawk.  We gave her Scout's card and showed her the website, Reachchildren.com," Marx later said in a statement on the ministry's website.

Surprisingly, this team of Christians didn't face any opposition from the various sex workers who strolled by their booth. Instead, it was fellow believers who criticized them for going into the lion's den.

However, Marx says they were just following Jesus.

"Jesus was a friend to the sinner and that's what we're doing here. Being a light in the darkness," he shared. "We were very intentional in both fasting and prayer before we came here this week. We've got literally tens of thousands of people praying for us, and then literally on the outside of this convention center walking and praying."

"Pornography is the spiritual ISIS of America," he said. "It's able to infect, and message, and make people become extremists in depravity and loss of natural affection...Pornography is a 24/7 attack against Americans. Even Christians in the church."