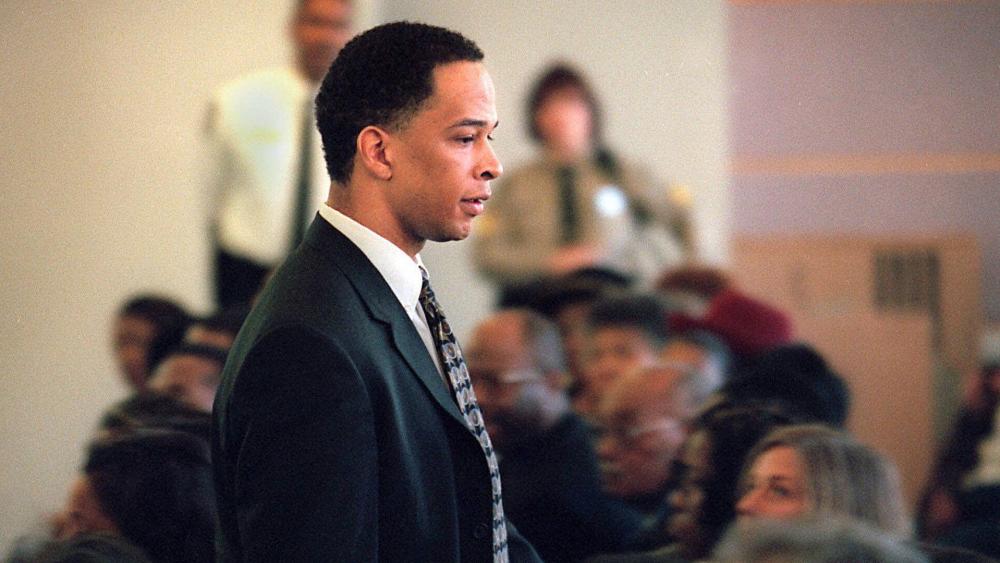 Former NFL player Rae Carruth has apologized for his role in the shooting death of Cherica Adams in 2001 and the permanent disability suffered by his then-unborn son, Chancellor Adams.

Carruth has spent the last 17 years of his life behind bars after being found guilty of conspiracy to commit murder in the death of 24-year-old Adams, who was seven months pregnant with his child.

Carruth is now expected to be released from prison in October.

In a 15-page handwritten letter and in a phone interview with WBTV in Charlotte, NC, he apologized to Adams' mother, Saundra Adams, for the death of her daughter.

"I want to sincerely apologize to you for the senseless act that led to the death of your daughter Cherica and the permanent mental and physical difficulties that Chancellor has to suffer through," he wrote.

He continued, "I cannot begin to imagine the hardship and sorrow you've had to endure behind all of this, and I am sorry for every bit of it. Having had time to look back and ponder on how the events of that night unfolded, I want you to know that I take full responsibility for everything."

Carruth also said he'd like custody of his son, now 18, one day.

"I'd give anything to have the opportunity to do right by Chancellor and to play a meaningful role in his life," he said.

But the boy's grandmother, who has been raising him, says that while she has forgiven him, that won't happen.

"I have mixed emotions about it," Saundra Adams said in an interview with WBTV.

"On one side it's what I've been praying for, that he would have a change of heart. On the other side there was a lot of untruths in what I heard because I've never received any responsibility from him. Especially saying that he's apologized or that he's even taken responsibility for Cherica's death, or Chancellor's cerebral palsy. I have never heard that. But that is something that I have been praying about. So it doesn't matter whether I hear it now or if I had heard it directly from him, that does give me a sign of relief because I don't think that we could go forth with a real relationship until there was some type of repentance."

Many took to social media to share outrage that Carruth has expressed an interest in wanting to help care for his son, questioning if he should be forgiven and granted custody when he killed the mother and the child is impaired.

"Shame on @WBTV_News for interviewing Rae Carruth for ratings. He needs no attention & deserves no redemption," wrote Elle W.

Shame on @WBTV_News for interviewing Rae Carruth for ratings. He needs no attention & deserves no redemption. Shame on our legal system for his light sentence. Saundra Adams is an incredible woman & I hope she lives forever loving & caring for Chancellor just to spite Rae Carruth

American Nurse wrote, "Rae Carruth's letter to Saundra Adams is despicable. No judge in their right mind would give him custody of a child he tried to murder."

Rae Carruth’s letter to the Saundra Adams is despicable. No judge in their right mind would give him custody of a child he tried to murder.

Carruth's story comes out as the state of Maryland is confronting the long debated issue of rape, parental rights and due process, which also has people expressing strong feelings.

On Feb. 13, Maryland Gov. Larry Hogan signed into law a bill that allows victims of rape to petition a court to strip their rapists of any parental rights over a child born of the crime.

The measure terminates parental rights of rapists if they have been convicted of the crime or if there is evidence they committed the rape.

"Thank you @LarryHogan for doing the right thing for these survivors," wrote Rachel Gonzalez.