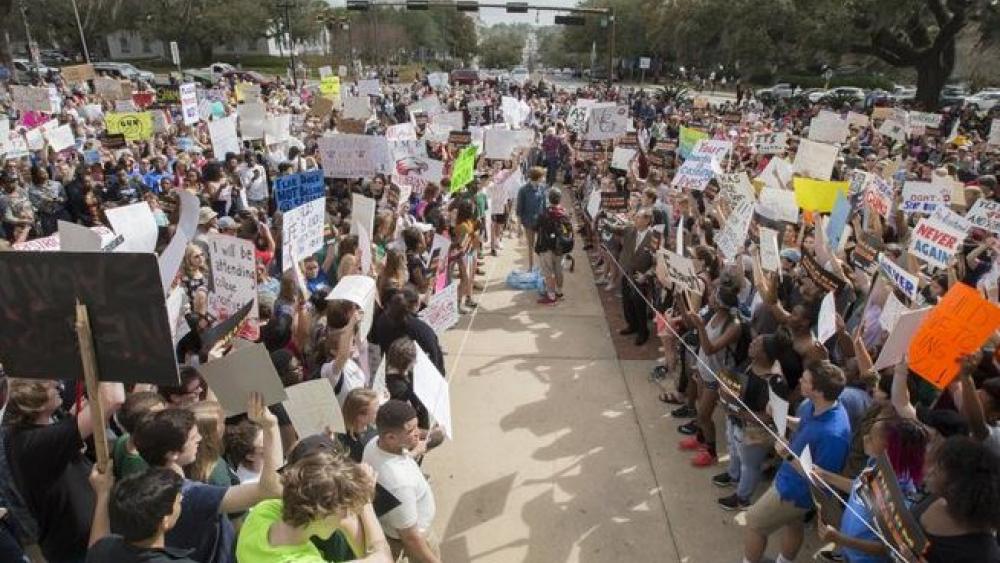 Students gather on the steps of the old Florida capitol protesting gun violence in Tallahassee, Fla.

President Donald Trump said Friday the Florida sheriff's deputy who failed to stop last week's mass shooting at a Parkland high school was a either a "coward" or just froze under extreme pressure.

"When it came time to get in there and do something, he didn't have the courage or something happened. But he certainly did a poor job. There's no question about that," Trump said. "That's a case where somebody was outside, they're trained, they didn't act properly or under pressure or they were a coward. It was a real shock to the police department."

Trump made the comments before speaking to the Conservative Political Action Committee in National Harbor, Maryland, where he reiterated his proposal to arm teachers, coaches and staff members who have experience with firearms either through military or law enforcement experience.

Meanwhile, Broward County Sheriff Scott Israel said Thursday it made him sick to watch Deputy Scot Peterson remain outside the school building instead of attempting to stop the shooter.

Sheriff Isreal said Officer Peterson took up a position on the west side of Building 12, where most of the carnage happened, but did nothing.

"I think he remained outside for upwards of four minutes," Israel said Thursday in a news conference. The shooting, he said, lasted six minutes.

The sheriff came to that conclusion after watching surveillance video, talking to witnesses and getting a statement from Peterson.

The deputy has now resigned from the force.

Nikolas Cruz,19, is accused of killing 17 people, including students and teachers.

The president's speech at CPAC speech followed an address by National Rifle Association Vice President Wayne LaPierre on Thursday in which he accused gun control advocates of exploiting the school shooting for political gain.

Trump conceded that his proposal to arm teachers was controversial, but emphasized that teachers would be well-trained.