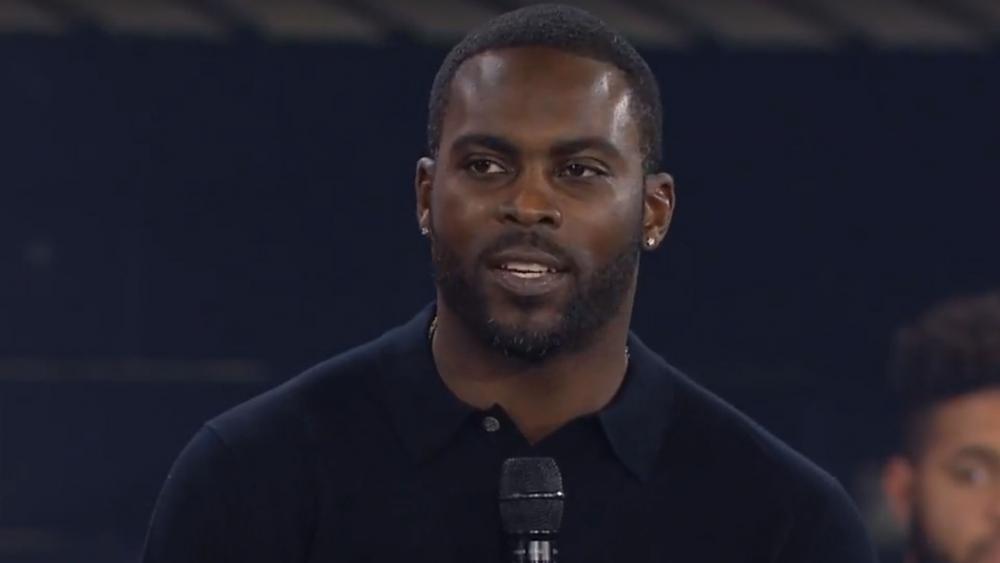 Vick's name became associated with controversy after his 2007 conviction related to dog fighting which interrupted his NFL career.

He addressed that during his speech. "I lost sight of everything that I felt I needed in order to become the man that I wanted to become," he told the crowd at Liberty.

Vick said he first developed a relationship with God at the age of 12, not because of his family's influence, but because he knew that to make it to the NFL he would need to be different.

But when his football career really took off, his faith was left behind.

Vick is one of Virginia Tech's most successful players of all time, leading the Hokies to an 11-1 season before becoming the No. 1 pick of the Atlanta Falcons in the 2001 NFL Draft.

He had signed a $130 million contract as a 23-year-old franchise quarterback for the Falcons, guiding them to the NFC playoffs in 2002 and 2004. He became the first NFL quarterback to rush for over 1,000 yards in one season in 2006. He was inducted into the Virginia Tech Athletics Hall of Fame on Sept. 22.

But it wasn't until his incarceration that Vick says he picked his Bible back up. It was reading Psalms 23, a passage of scripture that speaks of the Lord as our shepherd, that brought him back to God.

Vick says he knows many people will remember him for the things he's done wrong, but the man he was is gone.

Now he has a partnership with the Humane Society and is working to pass laws against animal cruelty.

"To face all your demons, put them in the past, and be forthright about it; it is the best thing you can do," Vick said. "At the age of 21 or 22, I was very conflicted mentally about the ways to treat animals. I fell into a trap of fighting dogs and thinking it was cool. The irony about it is I'm an animal lover. My entire life, I took in stray dogs. My heart and passion is there for the animal world."

Vick also works with adults and children to keep them from making the same mistakes that he did.

Football is also still a part of his life, Vick recently signed on to be a Fox Sports NFL studio analyst, and he told the students gathered for the convocation that he expects the Eagles to win Super Bowl LII.

To close out his convocation speech, Vick read Psalm 23 over the students. He was then prayed for by former Virginia Tech offensive lineman Nick Acree, who now serves in Liberty's Office of Spiritual Development.