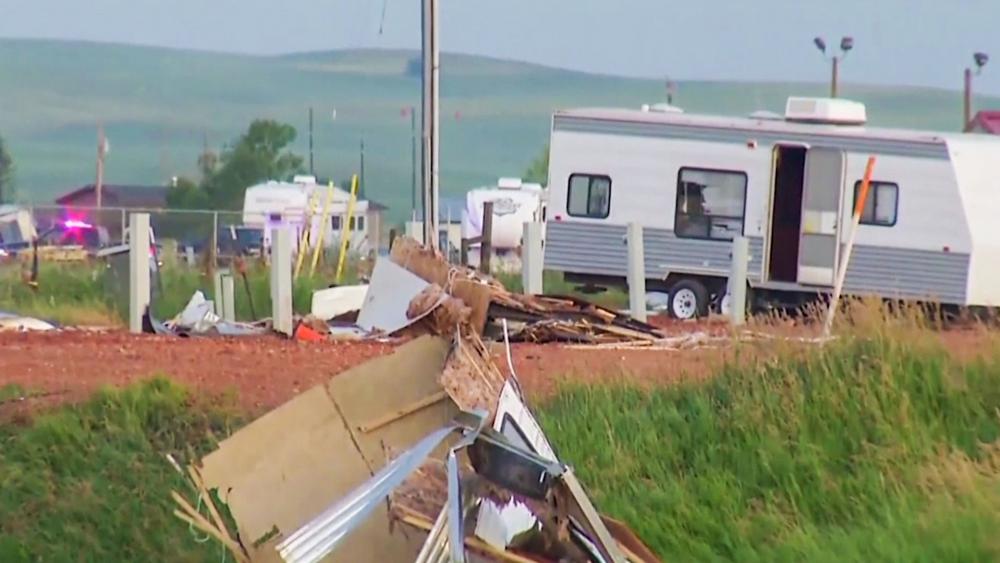 North Dakota Tornado
WATFORD CITY, N.D. (AP) - A newborn baby was killed and more than two dozen people were injured when a tornado whipped through a North Dakota oil patch city overnight, overturning recreational vehicles and demolishing more than 100 structures, officials said Tuesday.
The storm moved through Watford City, in the northwestern part of the state, shortly after midnight, hitting an RV park the hardest, according to sheriff's officials. About 20 of the reported 28 injured were staying at the Prairie View RV Park where high winds overturned some campers and damaged mobile homes.
The McKenzie County Sheriff's Office said in a news release late Tuesday that a 1-week-old boy died from injuries sustained when the family's trailer home flipped in the storm. The child's name was not immediately released.
National Weather Service meteorologist John Paul Martin classified the tornado as an EF2, which is defined by winds speeds between 111 and 135 mph. He said wind speeds reached 127 mph in Watford City.
Clifford Bowden, 37, was in his recreational vehicle when the storm struck.
"My dog was with me and the next thing you knew the storm picked up my camper and slammed it on the ground. It felt like we were weightless," Bowden said.
"It was scary. I feel like I'm a pretty tough guy. But, this storm, it made me shake uncontrollably," he added.
Schwartzenberger said his onsite commander reported 122 structures in the park were completely destroyed. In addition to those structures, there were 79 with moderate damage and 120 with minor to no damage.
Karolin Jappe, the McKenzie County emergency manager, said the RV park is one of the largest such facilities to spring up during the oil boom and there were some mobile homes on the property.
"It's just like an oversized RV park on steroids," Jappe said.
"There's more devastation than a tornado four years ago. RVs flipped over. Trucks underneath RVs," Jappe said.
Schwartzenberger says his house half a mile from the RV park suffered siding, shingle and hail damage.
"It's a tornado scene," Schwartzenberger said. "It went through and devastated an entire community down there. I'm devastated myself at what has happened. I feel for the families."
Schwartzenberger said the park residents were allowed back Tuesday afternoon to collect their belongings. He said the park would then be shut down and that cleanup operations would resume Wednesday morning.
"Obviously they are going to be stressed out by what they see because it was pitch black when it first happened," Schwartzenberger said. "That is why we are giving people the whole day to go in there. We want people to have the time to get their stuff."
About 150 people, including Bowden, are staying at the Watford City Civic Center where the Red Cross has set up a temporary shelter.
North Dakota Lt. Gov. Brent Sanford, a former Watford City mayor who has a home in the city, and Gov. Doug Burgum surveyed the damage Tuesday and met with local officials and displaced residents. Sanford said the extent of the damage is "devastating and mindboggling, with RVs utterly flattened and destroyed."
In northeastern Montana, officials said a storm with estimated wind speeds over 100 mph tore through part of a town Monday night. Sheridan County Sheriff Heidi Williamson said a microburst with speeds up to 118 mph destroyed at least nine small airplanes at the airport in Plentywood. No injuries were reported.
The storm also uprooted trees, downed power lines and damaged other buildings.
(Copyright 2018 The Associated Press. All rights reserved. This material may not be published, broadcast, rewritten or redistributed.)