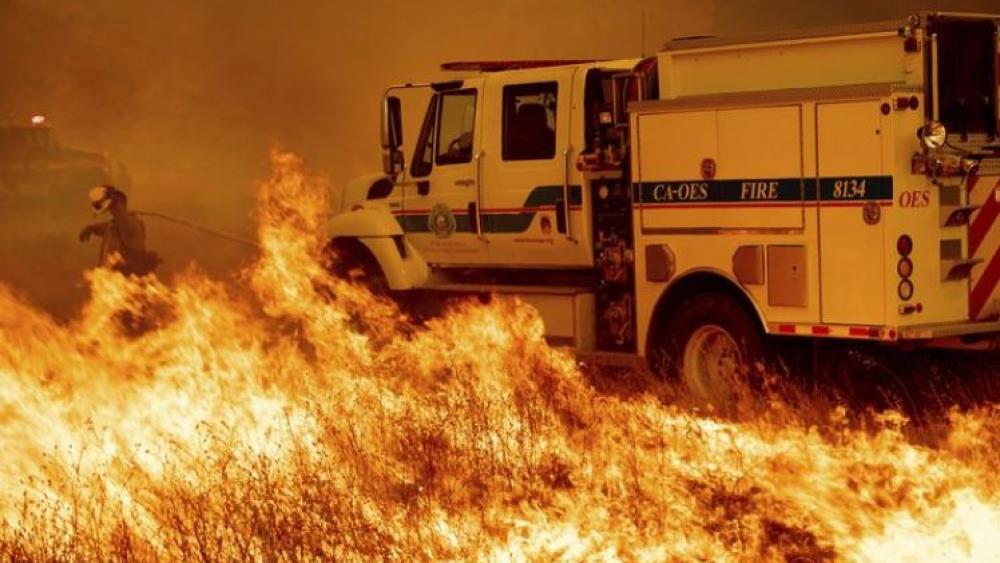 The fast-moving blaze that broke out Saturday in western Yolo County charred at least 34 square miles (88 square kilometers) of dry brush and threatened more than two dozen structures in ranchland northwest of Sacramento. No injuries were reported and the exact number of people evacuated was unclear.

Autumn Edens marveled as a huge plume blocked the sun while she drove to her job as manager of the Corner Store in Guinda, a town of about 250 people just north of the fire.

“You can see the smoke and you can see an orange-red glow from the flames. It looks like a movie,” she said. “I’ve never seen a fire like that up close and it’s an intense feeling.”

It was one of two major wildfires in the northern part of the state, where temperatures were soaring, humidity was dropping and winds were steady.

A blaze burning for several days to the west in Lake County jumped containment lines Saturday, prompting additional evacuation orders. That fire was more than 70 percent contained after charring about 22 square miles (57 square kilometers) of the brush.

Smoke from the Yolo County fire was contributing to poor air quality in Napa, Sonoma, San Mateo and San Francisco counties, according to the National Weather Service.

The smoky haze settling on areas to the south and west was rattling nerves near wine country communities that were devastated by deadly wildfires late last year.

“A lot of friends and family were texting today and saying they were having some PTSD,” said Savannah Kirtlink, who evacuated her Napa home during the blazes in December. She took photos of the smoke moving in this weekend and told KGO-TV she empathized with her neighbors to the north who were forced to flee their homes.

“I’m imagining what they’re going through,” she said.

Officials urged people not to call 911 about smoke unless they see actively burning fire.