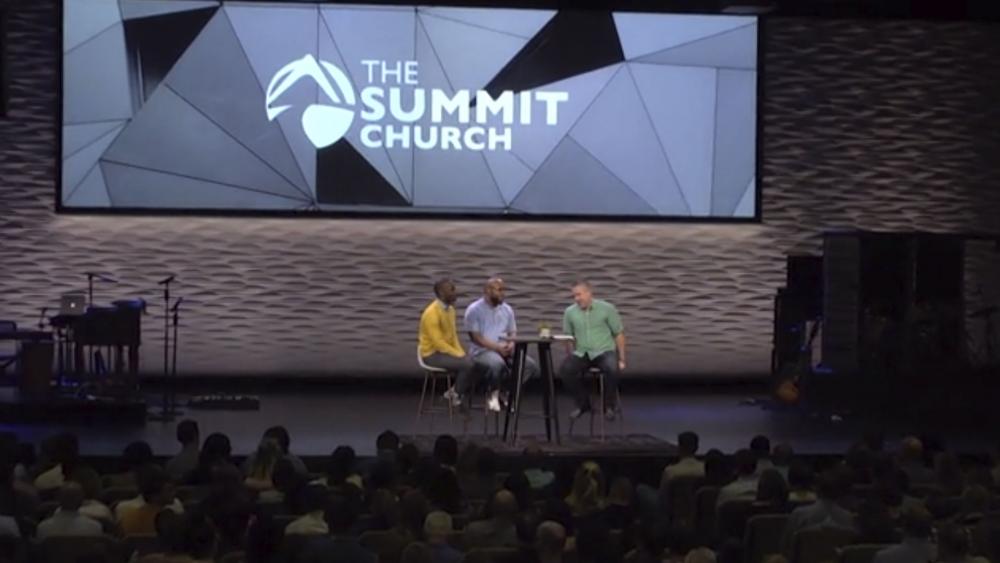 Greear's megachurch, The Summit Church in Durham, North Carolina, is on track to plant 1,000 churches in 50 years.

The church's growth stems back to its emphasis on "sending."  It's a word the church uses often to help members understand what it believes is their personal responsibility for evangelism.

"Being called by God means taking what God has given you and leveraging it for the purpose of the Great Commission," Greear told CBN News during an interview prior to his nomination during the SBC's annual meeting in Dallas in June 2018.

Greear has been leveraging his church for 17 years and the results are off-the-charts. The 10,000 member congregation has birthed more than 40 church plants in the US and more than 200 overseas.

One of its "baby churches," Mercy Hill in Greensboro, started in 2012 and is now the fastest-growing church in the state and the 11th fastest growing church in the country according to Outreach 100, a collaboration between Outreach magazine and LifeWay Research. It started with a core group of 30 that came from the Summit and today has more than 2,000 attending its three campuses.  It has baptized 800 people.

Pastor Andrew Hopper explained, "We came here and yes, it's a small team of 30 people – but when they're all incredibly bought in to one vision of what we want to see – of a church that grows, that reproduces, that sends, that multiplies – I mean we had this vision very much.  It's not the exact same thing as the Summit but we're an apple from that tree."

That one vision is the Great Commission. The Summit calls it "sending" and it starts when parents dedicate their children. Greear says, "We have them covenant as part of this parent commission that they're going to raise them for purposes of the Great Commission and when God calls their son or daughter perhaps to Afghanistan or Southeast Asia to take the Gospel, they covenant as parents that they're not going to stand in the way."

The Summit has designed its children's area to look like an airport with wall murals filled with planes and gate numbers in place of room numbers. The idea is to plant the thought that even kids are "sent" each week to share Jesus with their friends.

By middle school, the Summit wants its young students to have experienced a short-term missions trip with their family. In high school, that grows to three weeks overseas with Summit missionaries.  And in college, it encourages a summer of missions work along with a "big ask." The Summit wants its college graduates to pursue their first job near one of its church plants.

"When we plant churches we just kind of throw this out," says Greear, "Hey, when you graduate, you've got to move somewhere – why not move with one of our church plants?'"

'Your Life Is Your Mission Field'

High school student Sam Nieman has followed the track and now emphatically says, "I want to be a missionary. I believe that God has called us to go anywhere. It's not a question of when. It's where and how."

She plans to study Chinese at UNC-Chapel Hill and see where the Lord leads her.

Dominique Williams is graduating from college and raising support to go on staff with Mercy Hill full-time.  He has participated in a variety of missions experiences through Mercy Hill's college ministry and says he'd like to pursue ministry as a full-time vocation. "The whole idea is you're a missionary with your life," he told CBN News. "You don't have to go overseas. You don't have to do anything special. Your life is your mission field."

The Summit's focus on youth and college mobilization has helped to pave the way for its incredible success with church planting.  The week that CBN News visited Mercy Hill the Summit plant was sending out its 7th church plant team to Philadelphia. The group included several college graduates, young families and retirees.  Tapping into older church members is another Summit strategy.  It asks those headed for retirement to tithe their first two years and give their time to a plant.

Greear admits that while missions and church planting have been a life-long passion, his goal of one-thousand churches came almost as an afterthought.  "I came up with it in the middle of the sermon. It felt right and I just said it 'we're going to plant 1,000 churches in 50 years' – and I walked off the stage and one of our pastors said, 'Did you say 1,000 churches in 50 years?' and I said, 'Yeah, we're going to have to figure out how to do that.'"

He acknowledges that while the Summit is well on its way to accomplishing that goal, the process is often painful. Each year, he tasks several new staff pastors with the order to "head-hunt" – picking the best from Summit's congregation to start new plants. "Every year 100 of them stand on stage and I'm looking at them and I'm like, 'Those are very talented people who serve in our ministry. Some of them are big givers. How are we going to do without them?'"

Greear wants to push the Southern Baptist denomination to cultivate these same priorities of evangelism and church planting. He's also committed to raising up more people of color as church leaders. This timely decision comes in an era of declining Southern Baptist membership and racial discord.

"The SBC should be the most diverse group in the country because we ought to be able to show that what our culture is not able to do," he said, "we can accomplish that through the power of the Gospel in church."