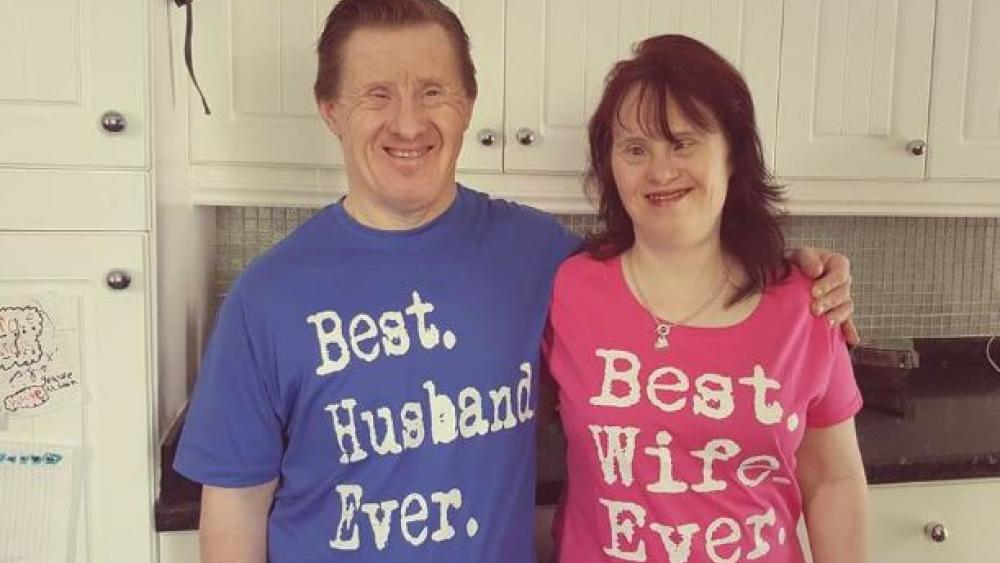 28 years ago the first couple with down syndrome broke a few barriers by becoming the first such couple to get married – today they are celebrating their anniversary, happy and in love.

When Maryanne and Tommy married, they received love from many, excited about their marriage, but they also received much criticism, especially from people they barely knew.

But even back then, their family was supportive of their decision. Lindi Newman, the sister of Maryanne, states that love is at the basis of their successful marriage.

“Anything is possible with love and there should be no limitations for anyone, no matter what their circumstances are,” Newman stated.

Newman isn’t only supportive verbally of the couple, as she also runs a Facebook page that is dedicated to celebrating the love found within Maryanne and Tommy’s marriage.

Tommy and Maryanne met in 1990 at a training center for people with disabilities, and quickly realized they liked each other more than simply co-workers. They dated for 18-months, and then Tommy popped the big question.

Maryanne’s mother, Linda, helped Tommy buy the ring, and even took him to a jewelry store to pick out a proper one!

“The day Maryanne met Tommy she came home with the biggest smile on her face. She couldn’t stop talking about him and asked if he could come for dinner,” Newman said.

Despite Maryanne’s mother and her sister approving of the marriage, many others did not. In fact, “many people even criticized Linda for allowing it in the first place. Many said it simply wouldn’t last and didn’t believe that people with Down syndrome could, or even should, be in a serious relationship.”

Regardless of the opinions of others, Maryanne and Tommy prove the haters wrong every single day, with their love for one another. After 28 years of happily being married, the couple has proved that their love is both real and can stand the test of time.

Maryanne’s sister added that the couple makes a positive statement for people with down syndrome, as most people assume people with disabilities cant, or even worse, shouldn’t be married.

“When they walk down the street holding hands they make a statement but in a good way, What keeps their marriage so strong is that there is never a hidden agenda. They love each other with their whole hearts and are honest with one another,” she added.

When asked, Maryanne recalls her wedding day to be “the best day of my life.” She also adds that she was “shocked” when Tommy proposed to her, “but I didn’t have to think twice about saying yes.”

“Tommy and I never argue. I love my husband very much. He is my best friend,” Maryanne adds sweetly.

You can watch Tommy and Maryanne’s love story below:

Despite all of the improvements on understanding those living with Down syndrome, people still continue to think these people should be limited in what they do, and even who they love.

Tommy and Maryanne’s relationship demonstrates just how capable they are of leading a normal life, just like everyone else.

Sadly, many places around the world encourage mothers to abort babies with prenatally diagnosed Down syndrome, and they never live to experience things like love.

The thing is, they’re not eradicating a disability, they are just murdering babies who have the disability. Denmark is another country that boasts of their disability abortion laws.

This trend is sweeping the world, as Australia and the Netherlands are both now hopping on the sick trend of aborting babies with disabilities.

There are no limits to what people with Down syndrome can accomplish when people have faith in them!

Life News reported many different people with Down syndrome that are making a change in the world including:

There are people like Mikayla (a pageant contestant), Ryan (a young man with a missionary’s heart), Charlotte (a pro-life United Nations speaker), and Blake (a business owner), who are accomplishing great things. Children like Emersyn,  Wyatt, Ollie, and Edie and are growing and learning and are just beginning to show the world all that they have to contribute.

Maryanne and Tommy stand as an example for everyone. They demonstrate that not only does each and every child deserve to experience life, but they can achieve things that everyone can, like getting married!