Kim Davis: Why First American Jailed for Defending Traditional Marriage May Not Be the Last 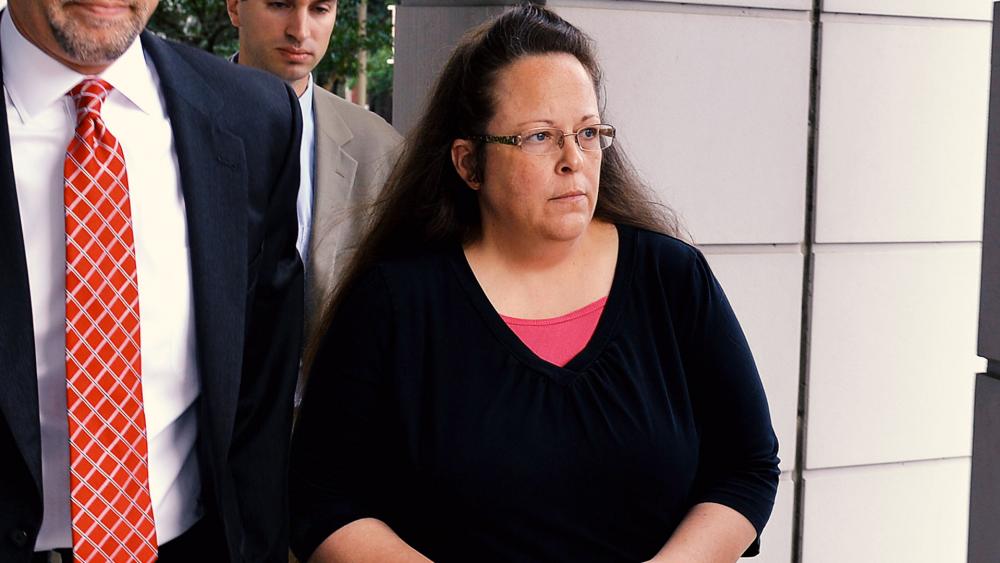 Kim Davis: Why First American Jailed for Defending Traditional Marriage May Not Be the Last

MOREHEAD, Kentucky – Carter County Detention Center in Grayson, Kentucky has a unique claim. It's the first place that any American in history has ever been put behind bars for taking a stand for one-man, one-woman marriage. That woman: Kim Davis.

Growing up a few miles over in Morehead, Davis lived a quiet life, reading her Bible and praying each morning; enjoying the fellowship of her husband, grown children and a widening circle of grandchildren. This chief clerk at the Rowan County Courthouse was certainly not the type you would expect to become the face of a national fight over marriage.

"I hate confrontation and it was something that was definitely outside my comfort zone," she told CBN News.

She Believed What the Bible Said

But every marriage license that came out of the county courthouse in Morehead had Kim Davis' name on it and her authority associated with it. As a Christian, she believed what the Bible said: that God defined marriage as the union of one man and one woman.

"For me, this has never been a gay or a lesbian issue. I have gay friends that I love dearly," she insisted. "This has been about standing up for the Word of God."

In her new book Under God's Authority, Kim tells how the June 2015 US Supreme Court decision legalizing same-sex marriage forced her to take a stand: she announced Rowan County wouldn't issue any marriage licenses as long as her name remained on them.

That led gay rights activists to descend on the Rowan County courthouse, demanding marriage licenses. Many were angry and also demanding Davis' head on a platter.

"I was having some really fiery, hot and hard darts thrown at me," Davis recalled of those hot summer days. "And they had bullhorns and they would walk up about two feet from my window and yell 'Do Your Job! Do Your Job!'"

But Davis felt she couldn't betray her own conscience. Her lawyer, Mat Staver of Liberty Counsel, compares her stand to what other stands Kentucky clerks can take.

"If you object to hunting, you have the ability to opt out of giving a hunting license based upon your conscience," Staver told CBN News. "But, up until this case, you weren't able to opt out of issuing same-sex marriage licenses."

As the days passed and the summer heat increased, protestors at the Rowan County courthouse became more aggressive.

"It was scalding hot and it was very volatile at times," Davis recalled.

And a sense of danger rose up.

"I got death threats here, over the phone, through email, U.S. mail, Fed-Ex packages, glitter-bombs," Davis explained. "Animal excrement came all the way over from overseas, from New Zealand."

"We got death threats phoned into us," Staver said of Davis' legal team. "We had people saying they were going to come and blow us up."

And threats against Davis were very explicit.

Staver recalled one that stated, "Someone would come and tie her up, rape her in front of her husband, kill her husband and burn their house down."

The lawyer found it ironic that it was their opponents who were labeling Christians intolerant and hateful.

"What we saw was such hostility," Staver recalled. "There's an irony in which people say Christians aren't tolerant. Yet what we saw on our side from such people is absolute hatred, hostility, death threats and literally wanting to eliminate us."

In the midst of all this, a judge at the federal building in Ashland Kentucky ordered Davis to resume granting marriage licenses and demanded Davis convince him why she should not be held in contempt.

In her book, Davis wrote that although she tried to convince him, the judge in September 2015 labeled her religious reasons for not complying with his order "simply insufficient." He also said that her "religious objection" might create "a proverbial slippery slope."

Then the judge stunned both sides – Davis and her legal team and the opposing legal team – by instead of talking about fines for her contempt, he moved straight to talk of jail time.

Davis wouldn't back down from her stand over the marriage licenses, so it was off to the Carter County Detention Center.

'Who Else Goes to Jail Before This is Over?'

As Davis was being sent there, well-known Christians were reacting with outrage. Mike Huckabee – at the time a presidential candidate – called it "an unbelievable moment in American history." He asked, "Who's next? Pastors, florists, caterers? Who else goes to jail before this is over?"

Franklin Graham stated, "This is exactly what we feared would result from the Supreme Court's disastrous ruling."

Staver labeled the government overriding Davis' religious liberty and her conscience rights, "Unconscionable. It goes against everything that this country is founded upon."

All over the country, Christians were realizing if Kim Davis' religious liberties can be trampled on, maybe theirs can, too. If she can be sent to jail, maybe they'll end up behind bars as well.

Oddly enough, as Kim spent the next six days in Cell 151 praying, worshipping and reading the Bible, she found she was okay.

For one thing, she was touched by the kindness of law enforcement officers and others who worked in the detention center. She recalled how the two women who had to process her in cried the entire time, they were so sad to have to take her mug shot, fingerprint her and give her one of those famous orange prison jumpsuits.

Throughout her first evening of incarceration, she said one state policeman after another showed up at her cell to shake her hand and thank her for taking the stand she was taking.

"I had a sense of peace. I got rest. I slept well, I read a lot and studied a lot. God was right there with me," Davis said.

Staver added, "And she'd still be there if she had to be."

'Most People Would Buckle'

Three years later, the lawyer still marvels at Davis' ability to bear up under all she went through.

"Most people would buckle under that pressure," Staver said. "And why she didn't buckle is she was pressing into the Lord. That gave her the strength to move forward."

He went on, "Kim Davis when you're around her is a meek, lovely individual who loves the Lord and loves people. She would never do anything to harm anyone. But she would not be unfaithful to her Lord by affixing her name, title, and authority to authorize a marriage that conflicted with God's definition of marriage. And she was willing to go to jail and spend time in jail – as long as it took."

But Rowan County deputy clerks – who'd all been threatened with jail time as well – resumed issuing marriage licenses while Davis was behind bars. So the judge released her a day shy of a week. She walked out of the detention center and into a huge rally just outside held by supporters. She let the crowd know she was happy to be free but was well aware there will be other cases like hers.

"I want people to know that it's not if it happens, but when it happens, that you'll be faced with the same thing," she told CBN News. "Maybe not the exact same situation I was in, but a very similar situation. And to know that God is faithful and He will stand beside you."

Davis added, "And I want to be an encouragement that says, 'Hey, you know what? If she can do it, I can go through this."

Both Davis and Staver warn this fight over marriage is the defining cultural battle of our time, and those who want to re-define marriage don't just want you to acquiesce but accept and approve their new definition. If you won't, your religious liberty could be in just as much danger as Davis' was.

So was it worth it? Davis told CBN News she'd go through it all again if she had to. Staver explained why Davis felt it was imperative to take the stand for traditional marriage that she did. It comes from the belief that God made this universe and He set in place a natural order, and that His natural law rules in it.

He scoffs at the idea the 5-to-4 Supreme Court Obergefell ruling that legalized same-sex marriage should be respected.

"Five judges don't make law. Five judges have to have their opinions consistent specifically with natural law," Staver insisted. "They could have a nine-judge, unanimous Supreme Court ruling against gravity. That doesn't change gravity. No matter how many justices or how many people you get to vote on the issue of marriage, it doesn't change the essence of male and female, husband and wife, man and woman in the union of marriage. It is what it is no matter what somebody's popular opinion or judicial opinion is. Our opinions, our judicial opinions, our laws have to be consistent with natural law. And if they're inconsistent, they're no law at all."

Staver went on to paraphrase what Martin Luther King Jr. wrote in his famous "Letter from a Birmingham jail," stating, "He said that there are two different kinds of law. There's the higher law and there's the earthly law. And the earthly laws have to conform with the higher natural law."

Staver explained that King then went on to quote St. Augustine, who declared, "An earthly law that is contrary to a higher law is no law at all."

"I think this will ultimately fall into the trash bin of history," Staver said of the Obergefell ruling. "Just like the Dred Scott ruling that said because you're a person of color, you don't have the same rights as someone who's Caucasian."

Staver recalled how Kim Davis dedicated her life to Jesus Christ less than a decade ago and then saw Him beautifully change that life.

Tying that into Davis' stand at the Rowan County Courthouse, Staver said, "Kim Davis was so sold out to Jesus because of what He had done for her in transforming her life. She would not be unfaithful." 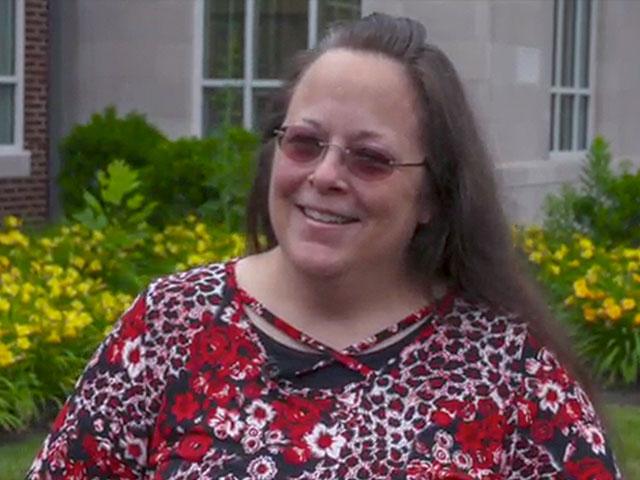 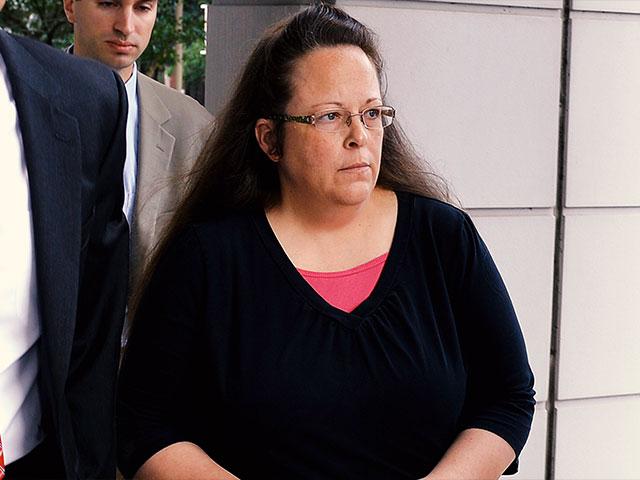 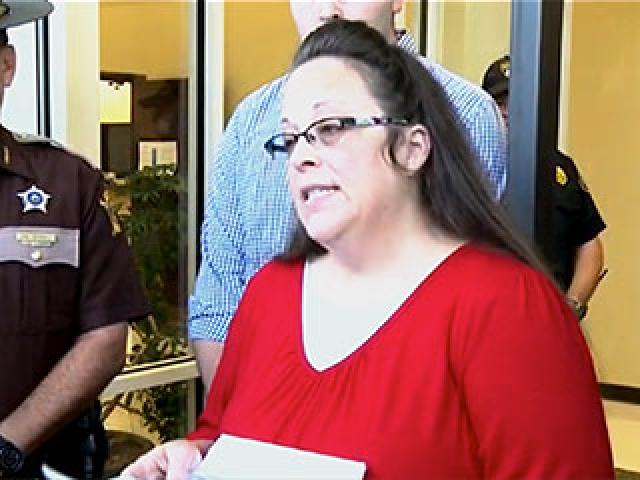