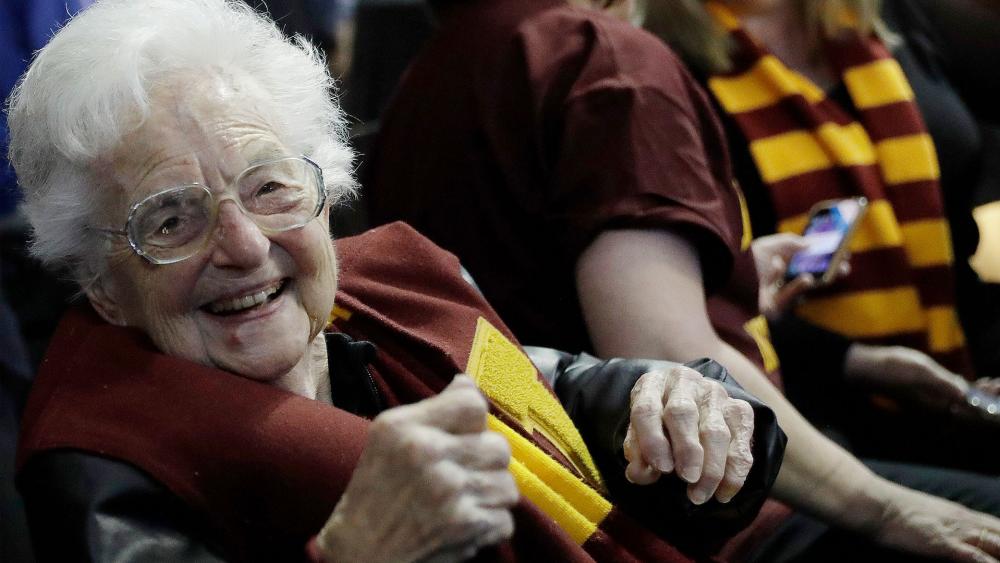 The Loyola Chicago basketball team may be racking up the wins during this year's March Madness tournament, but it's their team chaplain that's stealing the show.

Sister Jean Dolores-Schmidt is a 98-year-old nun and she's served as the chaplain for Loyola basketball team for over 20 years.

Despite the success of the Ramblers in this year's tournament, Sister Jean is the most-tweeted-about member of their organization, according to ESPN.

Ahead of the win that advanced the Ramblers into the Elite Eight for the first time since 1963, Sister Jean prayed for victory and encouraged her team to, "stay focused," and use their heads and their hearts.

"Stay focused. Use your heads and your hearts."

When the Ramblers won that game against Nevada, 69-68, Sister Jean was there to hug each player on his way to the locker room.

She jokes that her own team broke her March Madness bracket, defying the odds as it works its way through the NCAA tournament. She'd counted them out in the Sweet 16 game.

"I said, 'I don't care how far you break my bracket. As long as you've broken it, you have to go a little more now,'" Sister Jean told The Washington Post.

Ally Spiroff, a former Loyola student who earned her master's degree in communication, did her capstone project on Sister Jean, according to the Chicago Tribune.

In the short film about women who have shaped Spiroff's life, Sister Jean shares a little bit about her role with the Ramblers.

"Before a game, I pray with them in a huddle and kind of repeat what the coaches told them about which players to watch out for and all that kind of thing," Sister Jean says in the video.

"I send the coach an email after every game," she continues. "And then I send the team, each member on the team, an email the following morning. The body of the email is pretty generic, and then I put a little P.S. at the bottom with their name on and say, as I did this morning, 'Oh, Milton, I'm so happy that you are the most valuable player of the week! That 3-pointer you made last night to tie at regulation time was absolutely perfect.'"

Sister Jean isn't slacking on her duties while at the NCAA tournament, she says she scouts each upcoming opponent and compares notes with Coach Porter Moser.

Her next assignment, Kansas State, the team Loyola is set to play in the Elite Eight game Saturday evening.