'Kind of Awful': Another Snowstorm Clobbers the Northeast

NEW YORK (AP) — For the second time in less than a week, a storm rolled into the Northeast with wet, heavy snow Wednesday, grounding flights, closing schools and bringing another round of power outages to a corner of the country still recovering from the previous blast of winter.

The nor’easter knocked out electricity to tens of thousands of customers and produced “thundersnow” as it made its way up the coast, with flashes of lightning and booming thunder from the Philadelphia area to New York City. A New Jersey middle school teacher was struck by lightning but survived.

Officials warned of a hazardous evening commute and urged people to stay off the roads.

“It’s kind of awful,” said New York University student Alessa Raiford, who put two layers of clothing on a pug named Jengo before taking him for a walk in slushy, sloppy Manhattan, where rain gave way to wet snow in the afternoon. “I’d rather that it be full-on snowing than rain and slush. It just makes it difficult.”

The National Weather Service issued a winter storm warning into Thursday morning from the Philadelphia area through most of New England. Forecasters said Pennsylvania, New Jersey, and the New York City area could get a foot or more of snow, and Massachusetts 1½ feet.

It wasn’t much better on the ground, with Pennsylvania and New York banning big rigs from some major highways and transit agencies reducing or canceling service on trains and buses.

The storm wasn’t predicted to be as severe as the nor’easter that toppled trees, inundated coastal communities and caused more than 2 million power outages from Virginia to Maine last Friday.

But it still proved to be a headache for the tens of thousands of customers still in the dark from the earlier storm — and for the crews trying to restore power to them.

PECO, Pennsylvania’s largest electric utility, reported 120,000 outages by evening, about 6,000 of which were left over from last week.

The storm unloaded snow at a rate of 2 or 3 inches an hour, with some places in New Jersey, New York and Connecticut getting up to 16 inches by evening. Gusts up to 60 mph were forecast on Cape Cod, 45 mph at the Jersey shore and 30 mph around suburban Philadelphia.

The wind knocked gobs of slush and snow off buildings and trees in Philadelphia and New York, forcing pedestrians to watch out. Across the region, power lines and tree branches sagged precariously under the weight of the wet snow. Suburban streets were littered with downed trees and branches.

“I don’t think I’m ready for this to happen again,” Caprice Dantzler said as she walked through Philadelphia’s Rittenhouse Square. She said many trees that crashed into cars and homes and blocked streets during the last storm had yet to be removed.

A few hardy tourists waded through puddles and slush to visit the World Trade Center memorial, where Juan Escobar, visiting from Cali, Colombia, with his wife, Daniela, snapped a selfie in front of one of the reflecting pools. Escobar said it was the second time in his life he had seen snow.

Ten people were taken to hospitals with symptoms of carbon monoxide poisoning after running a generator inside a home in North White Plains, New York, police said. All were expected to survive.

A teacher was struck by lightning while holding an umbrella on bus duty outside a school in Manchester Township, New Jersey, police said. The woman felt a tingling sensation but didn’t lose consciousness. She was taken to a hospital with minor injuries.

Amtrak canceled some train service, and commuter trains in Philadelphia and New Jersey were put on an abbreviated schedule. School districts and government offices from Delaware northward closed, and the governors of New Jersey and Pennsylvania declared states of emergency.

Officials warned homeowners of the danger of heart attacks from shoveling heavy snow.

In New Jersey, a volunteer firefighter used the snow to save a house from major fire damage.

Stillwater firefighter Joe McAllister didn’t have any firefighting equipment when he got to the house, so he improvised, grabbing a shovel and tossing snow onto the fire, according to nj.com. McAllister knocked down most of the flames by the time other firefighters arrived. 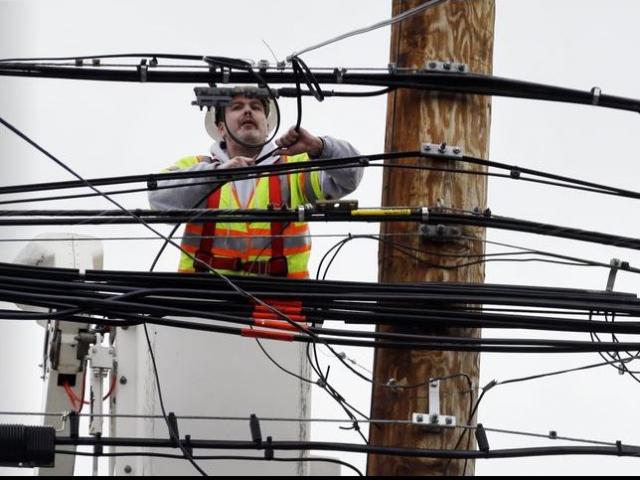 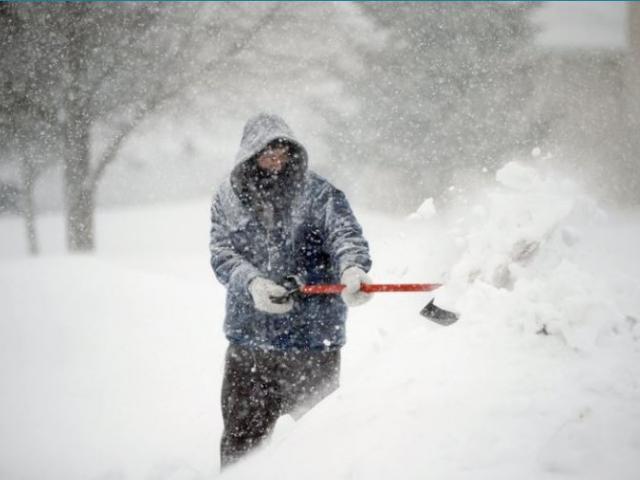 Winter Storm Threatens Foot of Snow for Parts of Midwest 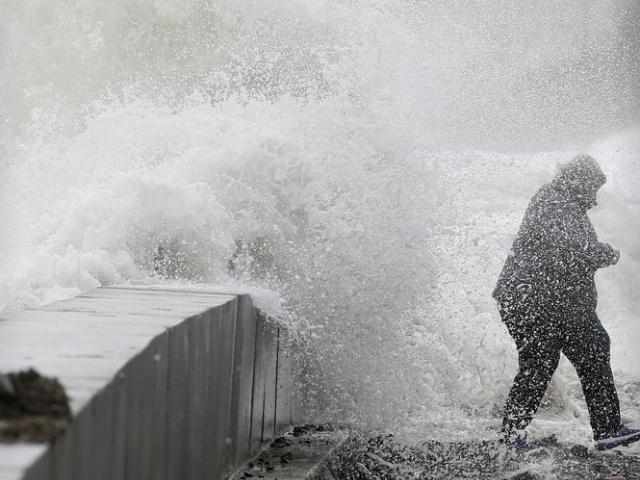 Dangerous Nor’easter Kills 8 and Leaves Millions in the Dark