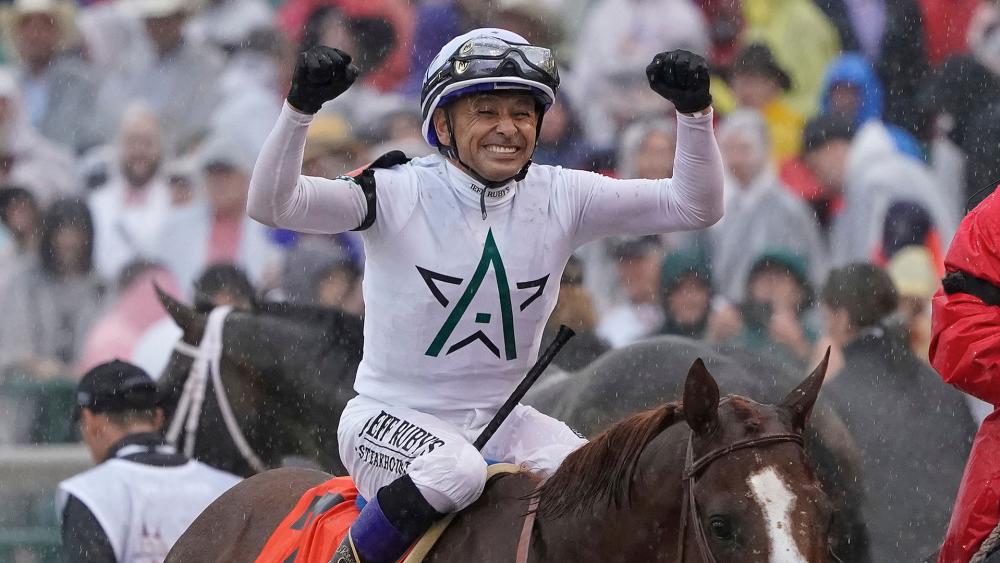 Jockey Mike Smith
Justify is justifiably getting a lot of credit for his big win at the 144th Kentucky Derby this weekend. Jockey Mike Smith, 52, is also being praised for the successful Derby run, but Smith is directing those praises upward.
Shortly after crossing the finish line, still mounted on the chestnut-colored colt, Smith looks to the sky giving thanks to the Creator he says got them there.
When asked about the race right after his big win, the first thing Smith does is thank Jesus, telling reporters, "I just want to thank my Lord and Savior Jesus Christ for blessing us on this afternoon, and blessing us with this amazing horse."

Justify and Smith's win was historic for racing fans. In an Instagram post, the Kentucky Derby writes, "The Apollo Curse is dead! Justify becomes the first horse since 1882 to win the Kentucky Derby after not racing as a two-year-old."

The Apollo Curse is dead! Justify becomes the first horse since 1882 to win the Kentucky Derby after not racing as a two-year-old.

According to Sports Illustrated, "The Apollo Curse" was named after a racehorse named Apollo which won the Kentucky Derby defeating Runnymede 136 years ago. Since then, no horse has won the race after not starting as a two-year-old, which is when most racehorses make their debut.
"It would take a horse like him to break that curse. Wow, he's just somethin' else," Smith said. "I can't describe how special this horse is, my vocabulary don't have the words for it."
He continued, "He's got that 'it' factor, he's just so above average with unbelievable talent and he's got the mind to go with it."
Smith also became the second-oldest jockey to win the Derby, behind 54-year-old Bill Shoemaker, who won in 1986 aboard Ferdinand.
Smith and Justify head to the second leg of the Triple Crown, the Preakness Stakes, on May 19 in Baltimore. The duo is currently favored to win.

Hall of Fame jockey Mike Smith rode Justify to a win in the #KentuckyDerby yesterday, and the first thing he did was give glory to Jesus Christ for all the world to hear. That’s great! https://t.co/rSL3ZHGZd6