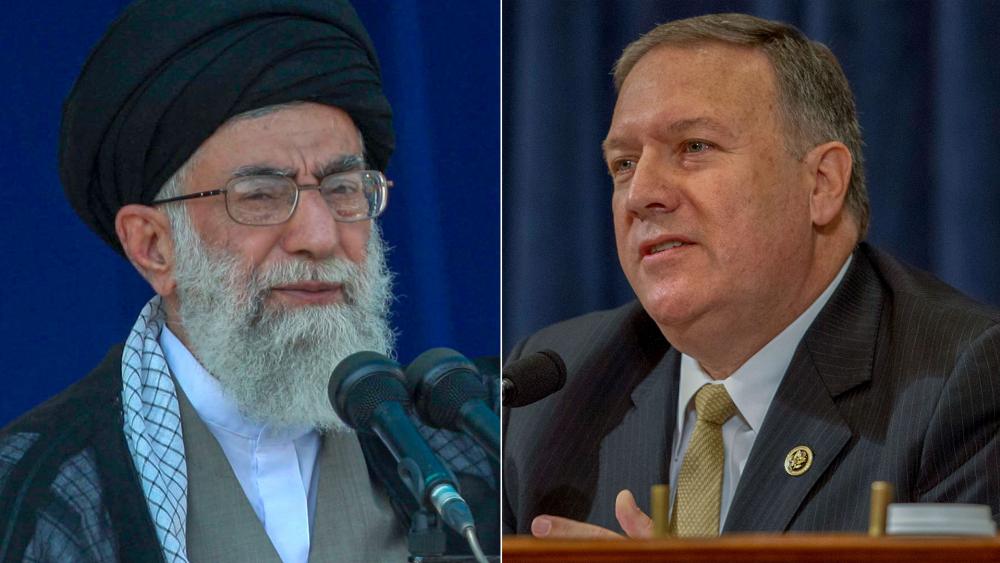 Weeks after President Donald Trump pulled the United States out of a controversial Iranian nuclear agreement, the White House is laying the groundwork for how it is going to deal with the Islamic regime's nuclear ambitions.

"As President Trump said two weeks ago, he is ready, willing and able to negotiate a new deal, but the deal is not the objective," said U.S. secretary of state Mike Pompeo, during a speech at The Heritage Foundation. "Any new agreement will make sure Iran never acquires a nuclear weapon and deter the regime's malign behavior in a way that the JCPOA never could."

In his first major foreign policy address as America's top diplomat, Pompeo said the White House will lay the framework for what is going to be "unprecedented" pressure campaign against the Iranian government.

.@SecPompeo: The sting of sanctions will only grow more painful if regime does not change course from the unacceptable & unproductive path it has chosen for itself and the people of #Iran. These will be the strongest sanctions in history by the time we are done. #PompeoAtHeritage pic.twitter.com/TYmWQLiuNq

"We will apply unprecedented financial pressure on the Iranian regime The leaders in Tehran will have no doubt about our seriousness," Pompeo warned. "The sting of sanctions will be painful if the regime doesn't change... these will indeed end up being the strongest sanctions in history when we are complete."

The White House wants Iran to comply with 12 demands and in exchange, the United States would be willing to lift all sanctions and restore full diplomatic and commercial ties with Iran.

"You know that list is pretty long, but if you take a look at it, these are 12 very basic requirements," Pompeo said. "The length of the list is simply in the scope of the malign behavior of Iran. We didn't create the list, they did."

1. End its nuclear program
2. Provide complete access to all nuclear sites and facilities
3. Stop its proliferation of ballistic missiles
4. Release all US citizens and citizens of other partner allies
5. Stop financial and military support of Hamas and Hezbollah
6. End support of armed militia groups
7. Cease support of the Houthi rebels fighting in Yemen
8. Withdraw all forces from Syria
9. Stop funding Taliban and other terror groups in Afghanistan
10. Cease all support for global terror activities
11. Stop threatening the United States
12. Stop cyber attacks

"From my conversation with European friends, I know that they broadly share these same views, of what the Iranian regime must do to gain acceptance in the international community," Pompeo said about the demands.

.@SecPompeo: We will ensure freedom of navigation on the waters in the region. We will track down Iranian operatives and their #Hezbollah proxies operating around the world and crush them. #Iran will never again have carte blanche to dominate the Middle East. #PompeoAtHeritage pic.twitter.com/fPNzZyPgr5

In addition to the list of demands, Pompeo vowed that the U.S. and its allies are going to "track down Iranian operatives and their Hezbollah proxies operating around the world and crush them."

.@SecPompeo: We will cont. to work w/our allies to counter the regime’s destabilizing activities in the region, block their financing of terror & address #Iran’s proliferation of missiles. We will also ensure Iran has no possible path to a nuclear weapon – ever. #PompeoAtHeritage pic.twitter.com/hrWlrVfRPt

"Basically, this a big shift from what we have seen for the last 8 years under the Obama administration," said CBN's chief international correspondent Gary Lane, who travels frequently throughout the Middle East. "This is a change, this is shifting away from more of an accommodation of the Iranians to taking them on."

Mr. Pompeo urged Iran's ruling mullahs to "to summon the courage to do something historically beneficial for its own people, for this ancient and proud nation."

"For two generations the Iranian regime as exacted a heavy toll on its own people and the world," Pompeo said. "The hard grip of repression is all that millions of Iranians have ever known."

.@SecPompeo “next year marks the 40th anniversary of the Islamic Revolution in #Iran At this milestone we have to ask: what has the revolution given the Iranian people? The regime reaps a harvest of suffering & death in the Middle East at the expense of its own people.”

Pompeo's speech comes on the heels of Trump decision earlier this month to withdraw from the 2015 deal brokered by President Barack Obama, Iran, and world powers.

"Unlike the previous administration we are looking for outcomes that benefit the Iranian people, not just the regime," Pompeo said.

"No enrichment, tough sanctions, and Iran should get out of Syria, we believe this is the right policy," prime minister Benjamin Netanyahu said late Monday. "We believe it's the only policy that can ultimately guarantee the security of the Middle East and peace in our region."