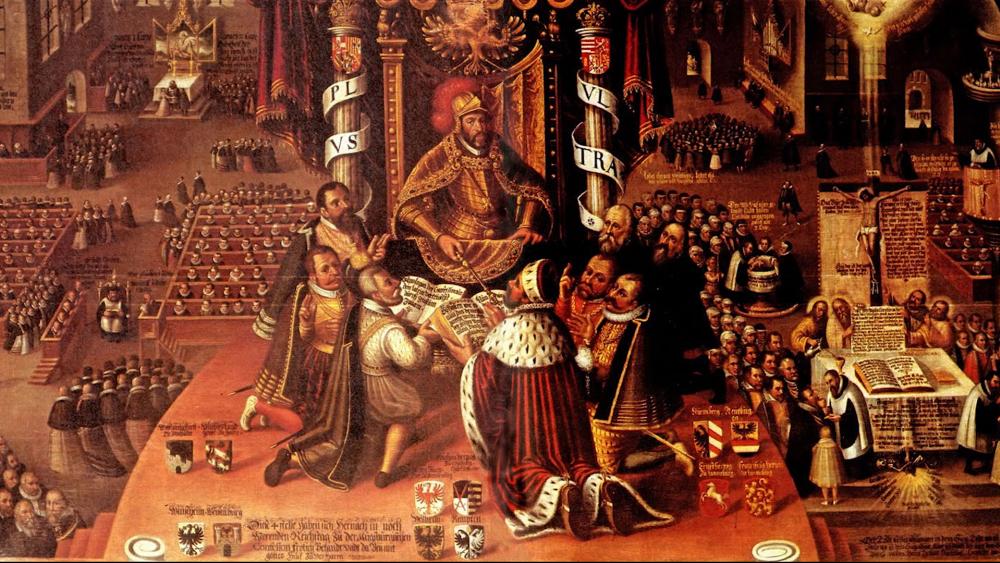 WASHINGTON – When the Pilgrims came to America, their journey was just as much about escaping a brutal Old World as creating a New World. Because Protestants not willing to go along with the established religious order of their home country faced persecution right from the first Protestant on.

There really wasn't that much criticism or disunity in Christianity until Martin Luther kicked off the Protestant Reformation, by literally nailing to the wall the radical doctrine that salvation comes not from priests, but by faith alone.

How Islam Brought Feuding Christians Together

His action shook the world so much, though, it led to bloody religious wars and persecutions between the traditional Catholic faith and the burgeoning Protestant denominations.

It actually took the threat of Islam to bring the feuding Christians together with a treaty known as the Peace of Augsburg in 1555. But the document contained some costly fine print.

"It has a little Latin phrase in the treaty: 'curios regio eius religio,' which means 'whose is the reign his is the religion,'" William Federer, author of The Treacherous World of the 16th Century, told CBN News.
That phrase gave monarchs the right to impose their own religion on entire kingdoms.

"You had to believe the way your king did," Federer said. "If you did not, you were persecuted or you fled."

"The kings believed that they had a divine right from God to rule over their subjects. The subjects had nothing to say about it," stated Dr. Eddie Hyatt, author of Pilgrims and Patriots.

And monarchs took a ruthless approach in stomping out religious dissent.

"The period of time in which they lived was brutal, brutal, brutal, " said David Barton of Wallbuilders. He discussed what it would have been like to be a believer back then.

"If you are a Christian, a professing Christian, but don't have the right doctrine, they will impale you, they will slit you," he said.

Federer added, "You were burned at the stake. You had your face branded as a heretic."

Burned for the Bible

Dr. Jerry Newcombe, author of American Amnesia, explained how in that cruel era even the Bible could endanger your life.

"It was disallowed to read the Bible in those days for yourself," he stated.

Barton said the rulers in those times would warn, "If you just try to put the Bible where other people can read it, we'll burn you at the stake."

Hyatt said, "If you were involved in baptizing an adult, you could be put to death."

Barton recounted how one English monarch dealt with Christians opposing his religion and how it operated.

He explained, "The king said 'I'm tired of you guys criticizing me.' So to 10,000 of them, he chopped off their ears, slit their nose, sliced their tongue, and said 'let's hear you say something now.'"

All believers were expected to attend services in the state church.

Barton stated, "And every Sunday that they didn't go to church, they were fined."

If instead, believers tried having prayer or worship services or Bible studies on their own, they could lose their freedom.

"Their meetings were raided and broken up," Hyatt said.

Federer stated the authorities might tell you, "'You're all criminals.' They'll bust into the home and arrest everyone."

'Religion can be Mean'

As for England's lawmakers, Barton explained how they could be just as controlling as their monarch.

Hyatt summed it up: "Religion can be mean without Christ."

He suggested, though, that even in the midst of so much death and persecution, religious dissidents could find godly grace, like Anabaptist leader Michael Sadler found after he was condemned to death.

"Before taking him out to burn him at the stake, they cut off his tongue, and then they took hot pincers and pulled flesh from his body," Hyatt began.

'This Suffering is Bearable'

But he explained how Sadler had agreed to give a sign if the torture he was experiencing was something he or other Christians could bear up under.

Hyatt said as the flames rose around Sadler, "He lifted his hand and made a sign: 'yes, this suffering is bearable.' In other words, God's grace was sufficient."

And these Christian historians told CBN News how even as all these ungodly activities went on, they can trace the hand of God using whatever it took to propel the Christian nations forward and westward.

"That gave the impetus for Columbus to set sail looking for a sea route," Federer said.

And that led to those Christian nations gaining the New World.

Islamic attacks also ended up sparking both the Renaissance and Reformation in Europe.

When Muslims invaded Greece, Federer explained, "All the Greek scholars were fleeing to Florence, Italy with their Greek art and architecture. We call this the Renaissance. But they also fled with their Greek New Testaments. And so this re-interest in the original language of the New Testament laid the foundation for the Reformation."

God's Hand in Wind and Storm

Some believe God used nature to alter historical events. For example, during the Battle of Lepanto in 1571, the commanders of Europe's Holy League turned to prayer as a huge Muslim fleet appeared ready to defeat them.

"While they are praying, the wind changes 180 degrees. The Muslim sails go limp and the Holy League's sails fill up and they crash in and capture or sink 200 of the 230 Ottoman Turkish ships," Federer recounted.

That saved Italy and possibly all of Europe from the Muslim warriors.

Then a divine storm came just as the mighty Spanish Armada was about to crush England and likely the rest of the Protestant world.

"A hurricane came and it smashed the Spanish Armada to pieces," Federer recalled.

Even the Spanish king saw it as God aiding Spain's enemies.

"Phillip the Second said 'I sent my Armada to fight England, not God's winds and rains,'" Federer stated.

Clearing the Roadblock to the New World

He explained how Spain had bullied most of the other Christian nations away from taking any big part in the New World.

But Federer added, "Once the Spanish Armada sunk, the other countries of Europe are not as afraid of Spain as they used to be, and there's this mad dash to settle North America."

Among those settlers: the Pilgrims, who just wanted to serve Christ in their own way and had given up on England ever allowing them the freedom to do so.

"That's really what led to the Pilgrims being here, was that culture in Europe that was so oppressive, so limiting, so secular, and so anti-biblical. And they wanted to pursue God," Barton said of these committed Christians willing to go to any length in the service of that cause.

One entire Pilgrim church volunteered to launch off to North America.

Hyatt said of them, "You know people are committed to one another when an entire congregation will board a ship with their spouse and children and move to a New World, knowing they may never see their other family members in the Old World again."

He pointed out they were determined to form a unique form of government for those times: rule by law, not by earthly kings.

"God was to be the King, and the laws that the people would make were to be what they'd be governed by," Hyatt explained.

Federer said they were following the model laid out by John Wycliffe, Christian leader and Bible translator in the 1300s, who put in the opening notes of the Bible he'd translated, "'for a government of the people, by the people and for the people.'"

No Police Needed if You'll Police Yourself

Federer explained the model for this was Israel, "This idea that goes back to ancient Israel: that the priests' job was to teach everybody in the country the law. And then everybody's accountable to God to follow the law. And then you can get by with no police."

He continued, "It's the people, each individual person having a relationship with God, getting their rights from God, being accountable to God, and then all these people who are equal choosing from among themselves who's going to fix the potholes in the road. They're going to divide responsibilities up among equals."

Barton added, "What the Pilgrims did when they got here was revolutionary compared to what was going on in Europe."

Listening to God's Guiding in Every Realm

"To my knowledge, no other nation has been formed specifically for the Glory of God and the advancement of the Christian faith," Newcombe said.

The Pilgrims determined to study God's Word and listen to His Holy Spirit and then do what He suggested in any arena of life.

"They believed the Bible and they applied it," Barton insisted. "And it wasn't just in church they applied it. They applied it in education and in land purchases and in criminal justice and in civil government, and in everything that went on."

Newcombe's respect for these believers knows no bounds.

He told CBN News, "I think the Pilgrims are models for all of us today in every single way, in terms of the way they lived their lives for God's glory. They even said in the Mayflower Compact 'we're doing this for the Glory of God and the advancement of the Christian faith.'"

'We have National Alzheimer's'

All these historians suggested Americans need to know these roots of America.

Federer quoted special advisor to President John Kennedy, Arthur Schlesinger Jr., who wrote, "History is to the nation what memory is to the individual."

Historian Will Durant wrote, "Civilization is not inherited. It has to be learned and earned by each generation anew."

"We have national Alzheimer's. Here we are, the freest country that the planet has ever seen, and we forgot how we got here. And as a result, we're just letting our freedoms be taken away," Federer warned.

Newcombe argued Thanksgiving is an excellent time to resolve to study and remember what these Pilgrims initiated in the New World.

Newcombe concluded, "They experienced many hardships, and yet, despite all the hardships, when the harvest came, they said 'thank you' to God."