'God is Still There': Woman Who Loses All Four Limbs Chooses to Live Joyfully 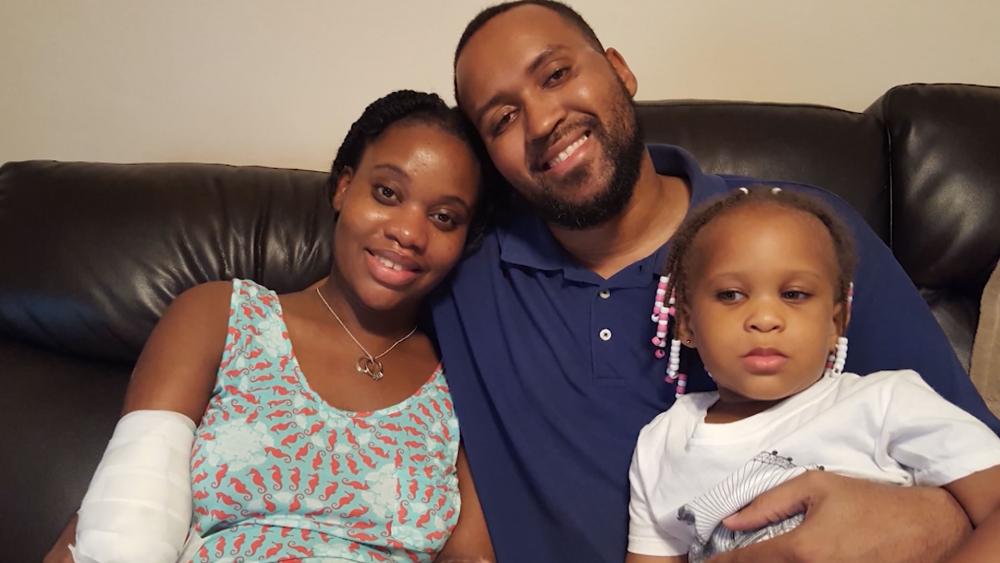 CORAL SPRINGS, Fla. – Kayleigh Ferguson-Walker and her husband Ramon were living a normal life in sunny Florida raising their young daughter when, in March 2017, their lives took a tragic turn.

"It came, body chills and it just got cold very quickly, and I thought nothing of it at first," Kayleigh told CBN News.

When the symptoms grew more and more severe, Kayleigh realized something wasn't right, and her husband took her to the hospital.

Once there, Kayleigh's situation worsened as doctors worked to diagnose and treat her sickness. Symptoms had grown to include labored breathing, a drop in her blood pressure, and failing kidneys.

During their examination, doctors discovered a problem with the baby and immediately moved to induce labor.

That led to the more devastating news.

"Her doctor came for me and told me that she was sorry to say but the baby didn't make it," explained Ramon. "I don't think they had an understanding of what happened."

Doctors eventually discovered that Kayleigh had Sepsis, a severe infection that threatened to shut down vital organs including her heart, lungs, and liver.

Ramon said, "I felt like my hands were tied and I couldn't do anything. I had to rely on the doctors and nurses. I couldn't physically do something to help her. So, it was very challenging for me to see her struggling."

After rushing Kayleigh to intensive care, doctors put her in a medically-induced coma.

After two weeks in a coma, Kayleigh was taken to another hospital in Broward County, where doctors say her limbs had become extremely toxic and drastic measures needed to be taken.

"It was immediately apparent because the second we just pulled back the bed sheets, you could see the circulation had changed," said Dr. James Fletcher, Kayleigh's doctor.
Gangrene had set in and in order to save her life, all four of Kayleigh's limbs had to be immediately removed.

"Her family was at the bedside," said Dr. Fletcher.  "They had left the previous hospital and come to our hospital with some hope we might be able to restore circulation, but in this situation, there was just nothing additionally that could be done."

Praying for a Miracle

Kayleigh and her family are all devout Christians. Friends and church members joined them in praying for a miracle. Her mother Laurel Robinson said it was difficult seeing her daughter in such a dire medical condition. She said she had doubts that Kayleigh would recover.

"I questioned God. I questioned him throughout because you know I said why her? Why all four. I got angry with him, very angry because how can you do this? She's been a Christian. She's been a believer," she said.

Adjusting to a New Normal

"The question that ultimately came to us was would you trade life for a limb? And the obvious answer, of course, was life – we would take life over anything," he said.

Today Kayleigh is adjusting well to her new life without hands and feet.

"I have one prosthetic to work with, but I use that as much as I can," she said. "Eating, I do the best with my elbow, because I have the elbows. I can use motion to eat and I've realized I'm left-handed."

Kayleigh says her faith in God has been the key to helping her deal with her loss.

"I try to look at the side 'let's see what I can do,'" she said. "I challenge myself a lot what I can do rather than just sit here and be like okay I can't do nothing, ain't got no limbs. No, I can't think that way."

Faith and a Positive Outlook

She admits that her journey has been the most difficult thing she has ever faced. She recalled a conversation she had with God after doctors removed her limbs.

"But I was like, I'm this position, you're just gonna have to strengthen me a whole lot more. And I'll just have to keep on going."

Filled with renewed faith and a positive outlook on life, Kayleigh often finds the strength to smile.

Kayleigh and Ramon have seen more smiles and received much needed spiritual support especially since returning to their church, Praise Tabernacle International.

"Only by His grace, said Hugh Ferguson-Walker, Kayleigh's father-in-law and associate pastor. "Only by His grace. It's all about Him. He's the only one who can give you the strength to face all this."

Many are amazed at Kayleigh's determination.

"It's fascinating to see her applying her makeup," says her Mom Laurel. "She put her eyeshadow on. She does that, and she tries to comb her hair and it's amazing to see her feeding herself. To actually see her saying 'no I can do it,' that's been a joy to us."

Even Kayleigh's Doctors are Inspired

Kayleigh is still been receiving treatment and after 13 surgeries, her doctors and nurses are inspired by her joyful spirit.

"I think that she's very singular in terms of one of the patients that's taken it the most remarkably, the most gracefully of any person I've ever come across previously," said Dr. Fletcher. It's just with everything that's kind of been thrown her way in terms of challenges, she's always found a way to look at the positive side, just never spoke remorsefully about her condition."

Kayleigh and Ramon hope that their story encourages others to trust God when life gets hard.

"If people can draw from us and they can question like 'what is it that's going on with that family. Why are they always happy? Why are they so in love with each other, in love with God? What is it?' That's the kind of thing I want people to get."

"No matter what you're going through God is still there and he will still be God," explained Kayleigh.

A fundraising campaign is underway to raise donations for medical expenses and to help build a handicap accessible home for Kayleigh.  Click here for more information.