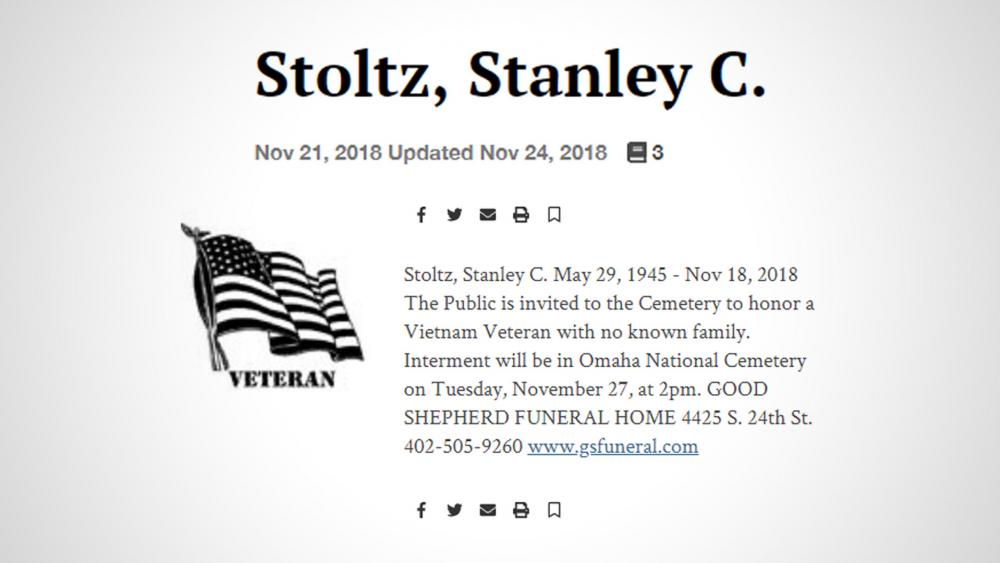 A Vietnam veteran received a final salute from hundreds of people who didn't even know him on Tuesday.

Stanley C. Stoltz, 73, passed away earlier this month in Omaha, Nebraska. The Good Shepherd Funeral Home tried in vain to track down his relatives, so instead of giving up, the funeral home invited the public to attend his graveside service at the Omaha National Cemetery through his death announcement in the Omaha World-Herald.

The short obituary then went viral with many people responding on his tribute wall on the funeral home's website.

Jeff Conrad wrote: "It will be my honor to attend your funeral service today! You have served our country with Honor, Courage and Commitment during the Vietnam Era! We SALUTE YOU and THANK YOU for your service and sacrifice! You are not forgotten! May God bless you in His Heavenly Kingdom! ~~ Jeff Conrad, CTACS, USN (Retired)"

Another user identified only as Candice wrote: "I did not know Stanley, but I was fortunate enough to see a FB post about his heroism and I'm grateful for his service, time and hardships. May he rest in peace."

Martin Dabrowski left another tribute: "Thank you for your Service and for making America safe for all of us You will never be forgotten."

So on a bright, clear and cold Tuesday, hundreds of people showed up to attend the services for Stoltz.

"This is the first time we've had this kind of crowd," Chaplain Roy Edwards told the World-Herald before the ceremony. "Most get six to eight cars, 15 at most. This is hundreds."

The Omaha Police Department even tweeted a photo showing all of the American flags flying in the breeze at the cemetery.

Incredible mix of people standing in the cold to honor a veteran. As someone in the crowd said, “get closer...we’re all family today!” #OPD via @OPDDepChiefGray pic.twitter.com/ZVgkApmsvD

World-Herald Reporter Chris Peters also shared photos of the turnout on Twitter.  The crowd was estimated to be around 400.

Just about to begin. The crowd is politely braving the cold. pic.twitter.com/aHjCQmBdaI

Stoltz was born on May 29, 1945, and grew up on a farm in Curlew, Iowa.  He served as a Private First Class in the US Army during his time in Vietnam, according to the newspaper.  His wife died in 1984 from cancer and later remarried and divorced, but never had any children, according to the World-Herald.