Florida Governor Warns Hurricane Michael Could Have Winds of 100 MPH 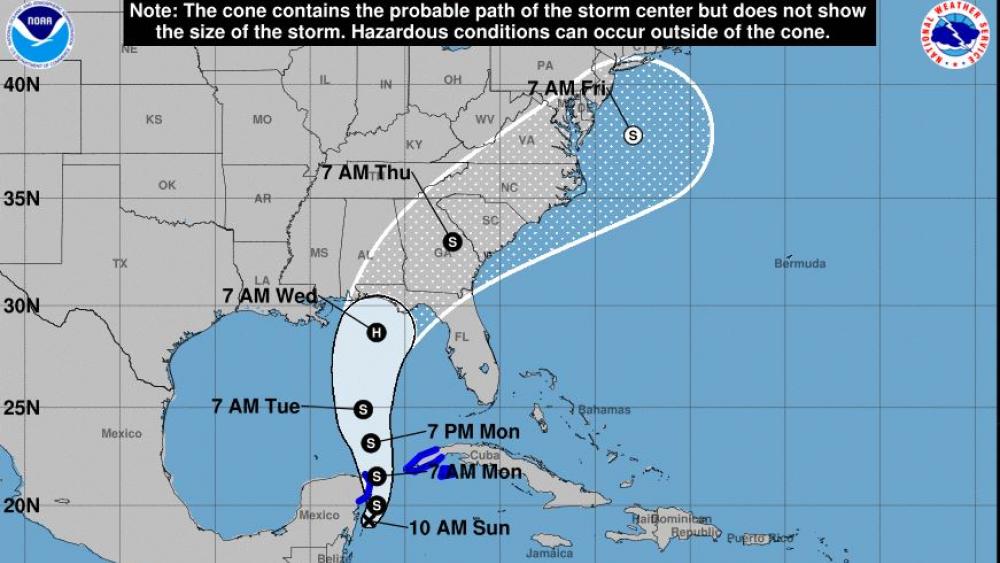 ORLANDO, Fla. (AP) — Florida Gov. Rick Scott on Sunday warned that a tropical storm headed for the Florida Panhandle could become a Category 2 hurricane with winds up to 100 miles per hour by the time it makes landfall in the middle of the week.

Scott issued an order for a state of emergency for 26 counties in the Florida Panhandle and the Big Bend area. The declaration will free up resources for storm preparation.

“This storm will be life-threatening and extremely dangerous,” Scott said after receiving a briefing at the State Emergency Operations Center.

The governor warned that storm surge could affect areas of Florida not in the storm’s direct path.

“If this storm hit Panama City, Tampa could still have storm surge,” said Scott, referring to two Florida cities about 375 miles apart by highway. “Every family must be prepared.”

Scott also activated 500 members of the Florida National Guard ahead of the storm.

The U.S. National Hurricane Center on Sunday upgraded Michael from a tropical depression to a named tropical storm, saying Michael had winds of up to 50 mph (85 kph).

The storm could strengthen into a hurricane by Monday night or Tuesday as its center moves over the Yucatan Channel, crosses the Gulf of Mexico and nears the Florida Panhandle coast sometime Wednesday.

Forecasters advised residents along the northeastern and central U.S. Gulf Coast to monitor the storm’s progress.

The north Florida city of Tallahassee on Sunday opened two locations where residents could get sandbags in case of flooding.

“While the impacts are still uncertain, our area could experience increased wind activity and heavy rainfall, which could cause localized flooding and downed trees,” Tallahassee officials said in a statement.

Tallahassee Mayor Andrew Gillum, who is the Democratic nominee for governor, had planned to campaign in South Florida Monday and Tuesday, but he said he would return to Tallahassee to help with storm preparations.

The city of Pensacola tweeted to residents, “Be sure you have your emergency plan in place.”

The storm was located by 5 p.m. ET Sunday afternoon about 130 miles (205 kilometers) southeast of Cozumel, Mexico and moving to the north-northeast at about 3 mph (6 kph). Tropical storm winds extended out 205 miles (335 kilometers), primarily east of the storm’s center.

A tropical storm warning was in effect for the Cuban provinces of Pinar del Rio and the Isle of Youth as well as the coast of Mexico from Tulum to Cabo Catoche. A warning indicates tropical storm conditions are expected, in this case, within 24 hours.

The hurricane center warned that the storm could produce a foot (30 centimeters) of rain in western Cuba, potentially triggering flash floods and mudslides in mountainous areas.

An Air Force hurricane hunter airplane was sent into the storm to investigate, the hurricane center said.

Michael is the 13th named storm of the 2018 hurricane season, according to hurricane center spokesman Dennis Feltgen.