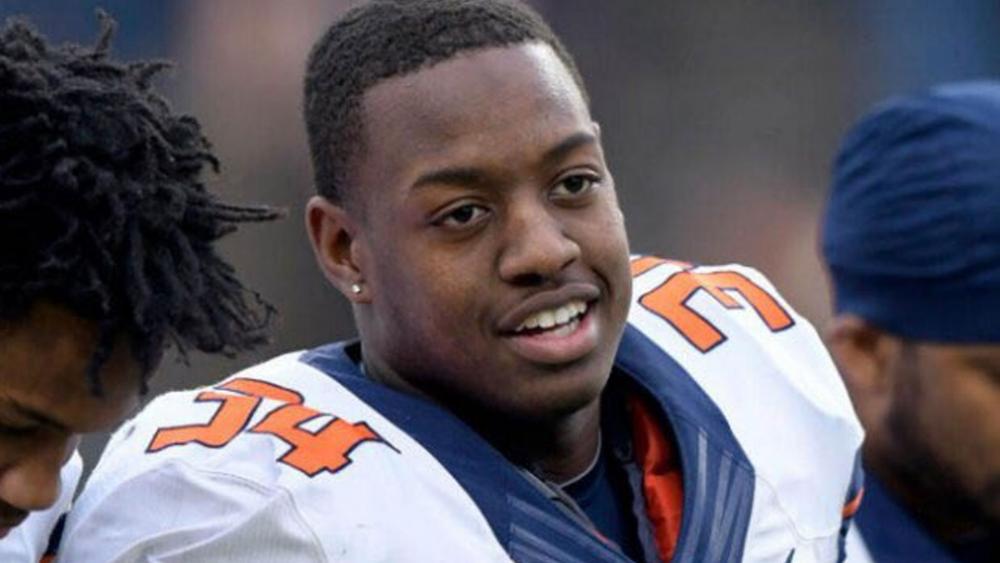 Christion Abercrombie
The family of a Tennessee State football player who collapsed from a head injury during a game is relying on their strong faith in God as linebacker Christion Abercrombie fights for his life.
ESPN reports the 20-year-old told athletic trainers he had a headache after coming off the field in the first half of Saturday's game. He then later collapsed on the way to the locker room for halftime.
Abercrombie was the rushed to Vanderbilt University Medical Center where he underwent surgery and is currently in critical condition.
His mother, Staci, told TODAY that despite it all, she's "still blessed" and says Christion "is blessed because he's still here fighting."
At a news conference Wednesday, she said it wasn't just coincidence that there was a hospital located three-tenths of a mile from the stadium, and that a neurologist happened to be on the sidelines during the game at the time of her son's collapse.
"This is by the grace of God. We're not here by accident," she said.
She continued, "Each day is a battle, but Christion, he's a strong young man. We're trusting God for a miracle."
She told reporters that Christion has responded by rubbing her fingers or raising his hand to worship music that she's been playing in the room.
"We know that Christian has a very very strong faith in God," she said. "Christion is fighting, so therefore, as a family, we're fighting. We're supporting him. We're standing strong in our faith. We're not wavering."
His mother said this was not the first time her son has had to fight for his life, detailing the story of his birth when he was born prematurely.
"I had him at 28 weeks," she said. "He came early. He fought, and he fought. He was in the hospital for five weeks. He was on a ventilator. He fought and he fought, and we see him today...He's still fighting."
Staci said she and her husband and family continue to pray not only for their son's recovery, but for the doctors as they work on Christion.
Christion had five tackles and a sack before his injury. His mother said she had no concerns about his safety while playing football, but does not know if he will be able to play again.
"Nothing was out of the ordinary," she said. "We saw him playing hard like he always does. Before the game he went to the end zone and prayed, I reached out and prayed. I saw him bouncing to the music, excited. There was nothing that shook us in that game."
She told reporters she and her family didn't even know Christion was hurt until his best friend called them down from the stands.
"What went through my head was it was so peaceful," she said. "That's how our God is, he makes everything peaceful."
On Tuesday night hundreds gathered for a vigil on the TSU campus.
Doctors have not yet said whether Christion will need more surgeries.
His mother and family continue to ask for prayers.