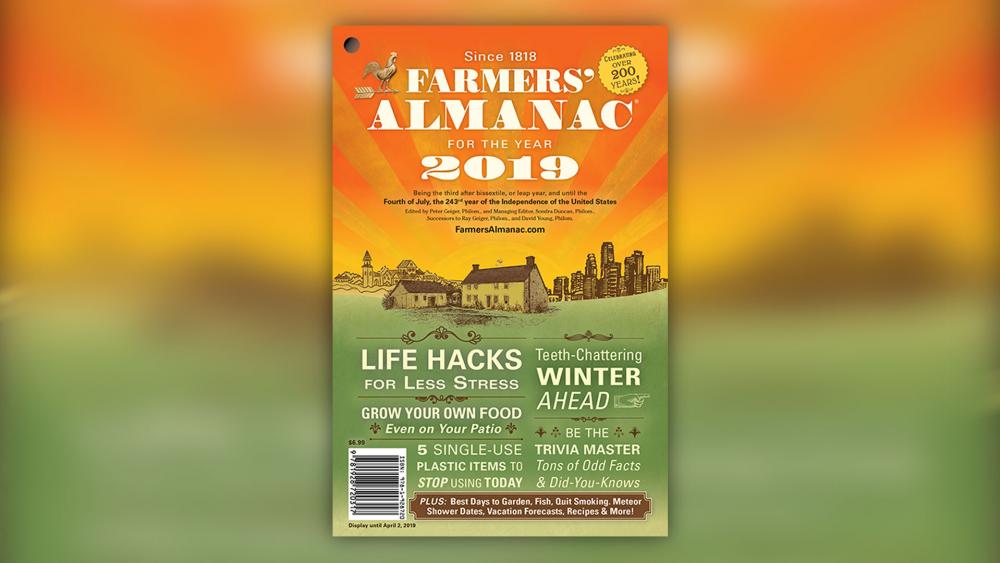 While maybe not as legendary as Pennsylvania's Punxsutawney Phil for forecasting the weather weeks in advance, the just-released Farmers' Almanac for the Year 2019 has given its long-range prognostication for the United States. The forecast – an icy-cold winter is coming.

"In terms of the winter for 2018-2019, we think it's going to be teeth-clatteringly cold, primarily in the northern tier of states from New England over to the West Coast", Almanac Editor Peter Geiger told CBN News in a recent interview. "The middle part of the country, what I would call the northern plains down to Texas, we're talking about it will be stingingly cold. A very, very cold winter is how we see it."

"The southeast gets near normal winter temps and is wet. The Great Lakes area is bitingly cold and snowy and of course, it's snowy up in the northeast. The West Coast is mild precipitation and mild temps," he added.

Not to be confused with the Old Farmer's Almanac, a different publication, the Farmers' Almanac does not use modern forecasting techniques or technology to make its predictions. Geiger, who has been the Almanac's editor for 40 years, says it relies on a formula based on a set of rules for forecasting that's been handed down since 1818.

"Back in the early 1800's, our first editor wanted to predict the weather for the farmers. So he came up with a mathematical formula that applied sunspot activity, planet positions, the effect the moon has on the earth and that allows us to do our weather (forecast) two years in advance," Geiger explained. "The other thing is, there have been only seven prognosticators in the 200 years. So everybody who does it has been doing it for many, many years."

Now before you roll your eyes and say the words "Fake News," just remember that even with today's technology, it's difficult for meteorologists to predict long-range weather patterns.

The Washington Post reports the book's long-range forecast is similar to the one given by meteorologist Joe Bastardi, the chief long-range forecaster at WeatherBell Analytics, who's also predicting a cold winter over much of the eastern two-thirds of the country.

Even though the weather affects everyone, Geiger says the weather segment is just a small part of the book, 16 pages out of 200. From cover to cover, it's filled with how-to's, life hacks, and interesting fun facts.

"For example, you can grow some food if you just have a balcony in the middle of a city. You can actually grow a tropical plant inside your house," Geiger told CBN News. "I've got a friend who has 10 five-gallon containers. He puts dirt in them and grows plants around his swimming pool. It protects him from the animals and he has a crop every year. We try to empower people to try things like that."

Other tips and stories in this year's edition include: How Did We Ever Live Without Air Conditioning?, Southern Superstitions, Safe People-Food for Dogs, Cracking the Code on Eggs, plus a section on trivia, legends, and lore.

"If you need a tough scrubber for tough spills, sprinkle salt over the dirty area and scrub with a sponge," Geiger said. "There's a lot of things we can do where we don't need chemicals, where we don't have to buy a different bottle for every single thing. And that's what I think the Almanac shows people and tells people."

"There's a lot of people out there who like to fish. We have a fishing calendar and a fishing page on our website that is very popular with millions of people," he continued. "And those things are what the Almanac is really about – how to live life well and do things for yourself."