'I Wanna See Jesus, but Not Right Now': Boy's Face Impaled by 17-Inch Skewer, How He Miraculously Survived 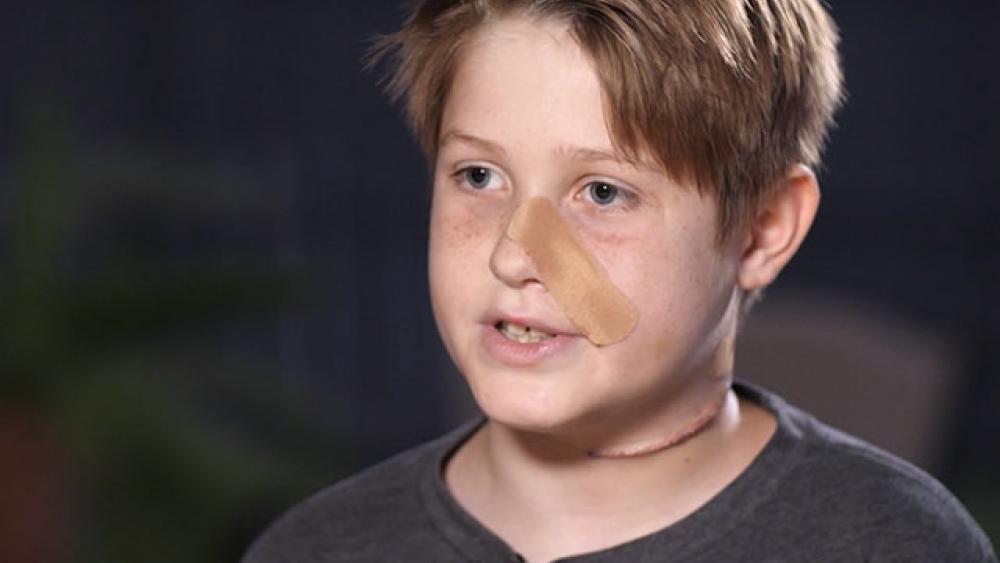 HARRISONVILLE, Mo. – Xavier Cunningham, who celebrated his 11th birthday this week, has a story that's being called the "Missouri miracle" – almost too fantastic to believe. It's also a story he almost didn't get to tell.

Like many boys his age, he loves football, playing outdoors, and spending time with his friends.

But that all came close to ending Saturday afternoon, September 8, 2018, with a nearly fatal accident in his backyard.

It all started when Xavier and two of his friends climbed into a nearby tree house.

"I was the last one in," he recalled.

What they didn't know was the tree house was already full of occupants: a swarm of yellowjackets that immediately started attacking the boys. In the rush to escape, Xavier tripped and fell off the ladder, face first, onto the ground – landing on a 17-inch rotisserie meat skewer they had found earlier.

"I felt this burning pain," he recounted. "I was there for about 30 seconds just screaming my head off."

Xavier somehow managed to get back home to his mom, Gabrielle Miller.

"He had this metal looking rod – what I thought was an arrow – coming out of his cheek," Gabrielle explained.

An 'Un-survivable, One in a Million Medical Marvel'

Gabrielle rushed her son to the ER with the skewer still protruding from his face. She desperately tried to keep him calm, swatting away at the yellowjackets on his clothes.

Gabrielle urged her son to think positively and told him "Jesus is here with us."

After being re-directed from two different hospitals, they were sent to the University of Kansas Medical Center and waited overnight for a team of 100 staff to assemble for the risky procedure.

"I was amazed that he was alive, let alone awake and talking," Dr. Ebersole said.

The skewer pierced Xavier's left cheekbone all the way to the back of his skull, yet miraculously missed his eye, brain, and spinal cord.

Still, the surgical team was gravely concerned about potential damage to the blood vessels in his brain or causing permanent damage in the process of removing the skewer.

"If this was a millimeter closer, it probably would have been an unsurvivable injury if it poked right through the carotid artery. But it went right next to it and right next to the vertebral artery," Ebersole explained.

"That trajectory is essentially one in a million," he added.

A Harrowing Tale of Survival

His doctors commended Xavier for his bravery and staying calm throughout the entire process. Three days after his surgery they released him and expect he'll make a full recovery.

CBN News traveled to Xavier's hometown of Harrisonville – about 40 miles south of Kansas City – later that week to chronicle his recovery.

His first outing was Friday night football to watch his older sister march with the band and to cheer for the team he hopes to be a part of when he's in high school. But that dream has been benched temporarily. His doctors have advised against playing football this season as he heals.

Instead, he will serve as an honorary coach for his fifth-grade football team this fall. He's eager to play basketball and baseball in the interim.

Xavier's alive not only because the skewer missed vital organs, but also because he never attempted to pull it from his face.

Curiously, he credits a movie for teaching him about the potential perils of pulling out sharp objects from the body.

"I watched 'Black Panther,'" he explained, referencing the fate of the film's villian, Erik Killmonger, after getting stabbed in the chest with a knife. "At the end of it, he just takes it out and dies. So I was like, 'Nope!'"

"The Hand of God Was on My Son"

Another lifeline for Xavier has been his Christian faith and a popular worship song called "Reckless Love," by Cory Asbury.

Xavier, who describes it as a "really good song," asked his parents to play it repeatedly while they were in the hospital. His church also sang it while he was in surgery and once more for his Sunday homecoming one week after the successful operation.

His parents told CBN News it was the "reckless love of God" that saved their son.

"God created those doctors to do phenomenal things," Shannon Miller, Xavier's stepdad, explained. "But there comes a point where we come to the end of ourselves, and this is where we were. No man could change this – only the God of heaven."

"Every day I see a miracle in my house," Gabrielle added, fighting back tears. "He is a living, walking miracle. The hand of God was on my son!"

Xavier prefers the phrase "terrifying miracle," acknowledging how his life was on the line. But it's also an experience that has strengthened his faith.

"So when you're getting to know Jesus you're like, 'Oh, he saved us. He gave his life for us,'" he explained. "And after this, it's just like he really truly is the God almighty."

Just like Jesus, Xavier now has visible scars, which he believes is a part of his lifelong testimony.

"He can make everything beautiful," he declared.