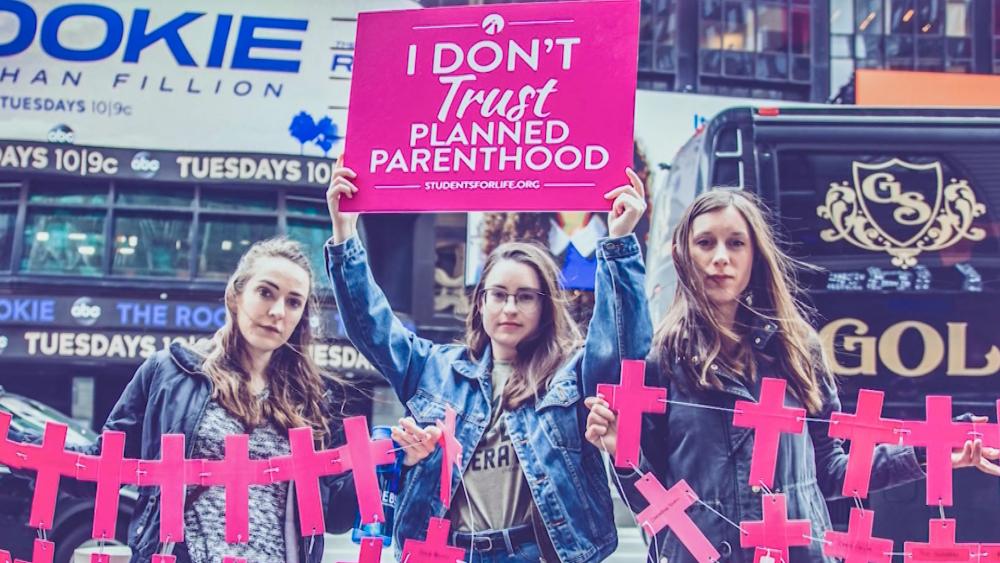 The pro-life movement is working in a bold venue to deliver its message – with two major events in Times Square, right in the heart of New York City.

Next month, Focus on the Family will take over Times Square with a Live ultrasound of a baby in the womb. And this week, Students for Life of America have been protesting in several big ways.

Students from across America came to Times Square with a message that their generation is the pro-life generation.

Their unusual method: Rallying with 900 crosses representing the 900 babies that are killed daily at Planned Parenthood clinics across the country.

Another big visual for the group: A digital billboard that's rotating for three days with pro-life messages, including one that says only seven percent of millennials support abortion extremism.

It's all part of a pushback from numerous pro-life groups in response to legislation that New York passed earlier this year. The broad new law has been labeled extreme because it allows abortion up to birth, and it may already be changing attitudes. In February, a Marist Poll found that Democrats who identify as pro-life jumped from 20 to 34 percent.

The head of Democrats for Life says they're seeing their numbers go up, crediting New York and other states that have recently considered legalizing abortion through the third trimester.

Kristen Day from Democrats for Life says, "I think what has helped is the recent move by New York and Virginia and other states to redefine what it means to be pro-choice to someone who supports abortion up to 9 months and even after."

"We'll have great speakers. We're going to have music, but we're also going to do a Live ultrasound of a third-trimester baby," he tells CBN News. "There is no way a person is going to be able to say, 'That is not a child.' It is a child and we want everyone to see it."

LIVE 4-D Ultrasounds on Times Square Jumbo Screen - Jim Daly to @CBNNews: 'No Way a Person's Going to Be Able to Say That's Not a Child' https://t.co/18FSkWHQxj @DalyFocus @@FocusFamily pic.twitter.com/m7RrBRylJw

Most of us are used to seeing 2-D ultrasounds which provide a static image, or even a 3-D ultrasound which merges 2-D images from different angles.

But 4-D adds the dimension of time so people in Times Square will be able to see a Live video of a baby moving around in the womb, kicking, stretching, or doing whatever he or she decides to do for the world to see.

'A Child Is a Child When Their Heart Is Beating': Ohio's Pro-Life 'Heartbeat' Bill Is Now Law
CBN News Email Updates