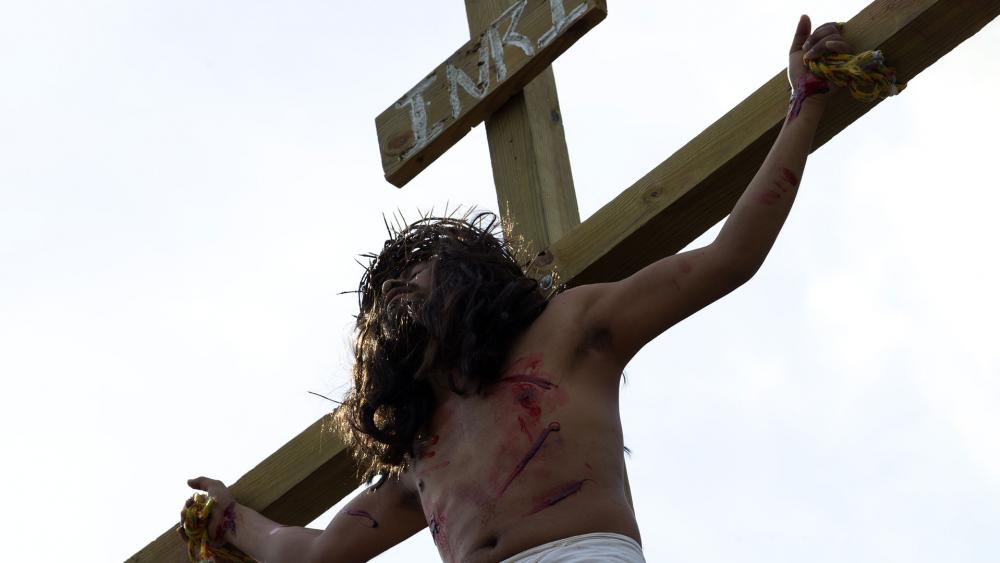 6027211422001
When You Understand it Medically, You'll Appreciate Christ's Sacrifice, Suffering, and Death All the More

Christians all know Christ died for them on the cross. But a doctor here in Indianapolis who studied crucifixion for a decade says until you understand what Jesus went through medically, it's hard to fully appreciate just how much He suffered to pay for the sins of mankind.

"It was the worst form of death that was imaginable," Dr. Joseph Bergeron, the author of The Crucifixion of Jesus, said. "And the Romans had been using it for three centuries by the time Jesus came along, so it was well perfected."

Bergeron told CBN News, "Most often on Easter we hear talks about how Jesus suffocated while He was on the cross."

However, the doctor says suffocation doesn't gel with the gospel accounts of Jesus talking on the cross.

"He talked to the Apostle John, for example. He spoke to the thieves who were crucified with Him. When you're suffocating and struggling for your last breath, you have no interest in carrying on a conversation," he argued.

And though that would be a bad way to die, the Romans made sure such a relatively quick death wouldn't happen so that those they crucified suffered much longer.

"There are literary references to people being on the cross for a week. When you're suffocating, you're just not going to last that long," the doctor shared, adding, "With crucifixion, it was a slow and torturous death."

Big Clue in Christ's Own Words: 'This is My Blood That's Poured Out…'

The real cause of death shows up in Christ's own prophetic words at the Last Supper.

"Jesus told us how He was going to die. He said 'this is my blood that's poured out for the remission of sins.' That's not suffocation. That's bleeding to death. That's shock. That's the complications of shock."

Christ knowing such a grim death was racing towards Him would be one explanation for the odd occurrence of Him sweating blood in the garden of Gethsemane.

Jesus in Traumatic Anguish Before the Physical Suffering Began

"And to be honest with you, I never really understood that or even thought it happened," Bergeron admitted. "But in studying the crucifixion extensively over the last 10 years, I've come to understand that sweating blood does actually occur. There've been very few cases – just a handful. They're always before severe injury, the threat of injury, and usually before execution. That Jesus sweat drops of blood meant that He fully understood what was about to happen to Him."

And then it began as Jesus was taken captive and led off to two groups of tormentors. The Jews and Romans both bludgeoned and tore His flesh in two vicious beatings.

Bergeron said of those Jews, "Caiaphas and the Sanhedrin convicted Him of blasphemy, which was punishable by death."

But under Roman rule the Jews had no authority to execute, so they physically and brutally punished Him. Then a whole company of Roman soldiers beat Him to within an inch of His life.

What Riled the Romans

The author explained, "Now you have to understand that Romans didn't like the Jews to begin with. They were anti-Semitic. And for this person who's charge was basically political insurrection: naming Himself King of the Jews, that would have heightened their anger and worsened the beating that He had experienced from Roman soldiers."

Bergeron said of Jesus, "And so His beating exceeded what was typical for crucifixion victims. And He had extensive blood loss and tissue injury from that."

So the shock began to set in before Christ reached Calvary.

Why He Couldn't Carry the Cross

"It looked like He was beginning to experience shock just walking there. Because He couldn't carry part of the cross to the crucifixion site. He would have been expected to do that. Everybody else did, but He could not," Bergeron said.

That led the doctor to diagnose, "So He was getting weak and going into shock at that time more likely than not."

Then came just about the most painful and humiliating execution the Romans could administer.

"It was considered obscene," Bergeron shared. "A Roman citizen wouldn't ever be crucified. It was meant for political insurgents, rank criminals and escaped slaves."

It all punished Jesus' body with a shock so traumatic as to kill him hours sooner than most people crucified.

The doctor explained shock would stop Christ's blood from clotting.

"This is a very ominous complication, difficult to control even in modern trauma centers," he shared from his years of medical experience. "In Jesus' time, there would be no treatment and it would lead to rapid death. And that explains why Jesus died so rapidly: six hours, rather than days, which could be the case very often."

The Son of God died rapidly, but horribly. Which leaves Bergeron in awe of the sacrifice.

He told CBN News in a quiet, reverent tone, "That He would become a human being and come here and do that to rectify our relationship as humans with God, to redefine it and restore us to fellowship with God, it's an amazing thing."

And on that cross, Jesus Christ showed how simple it is to find salvation in Him.

Then this doctor and man of faith shared, "The prayer to know God is so simple. It's like the thief on the cross. He didn't know what to say, so just: 'please remember me.' And a sincere prayer from anyone is never turned away. Jesus told him that he would be in paradise that day."

Bergeron realizes it's tough to face all the gory details of Christ's death. But he believes it can help us love and respect all the more a God willing to come down to earth and face such pain and agony so humans could be cleansed from their sins and spend eternity with Him.