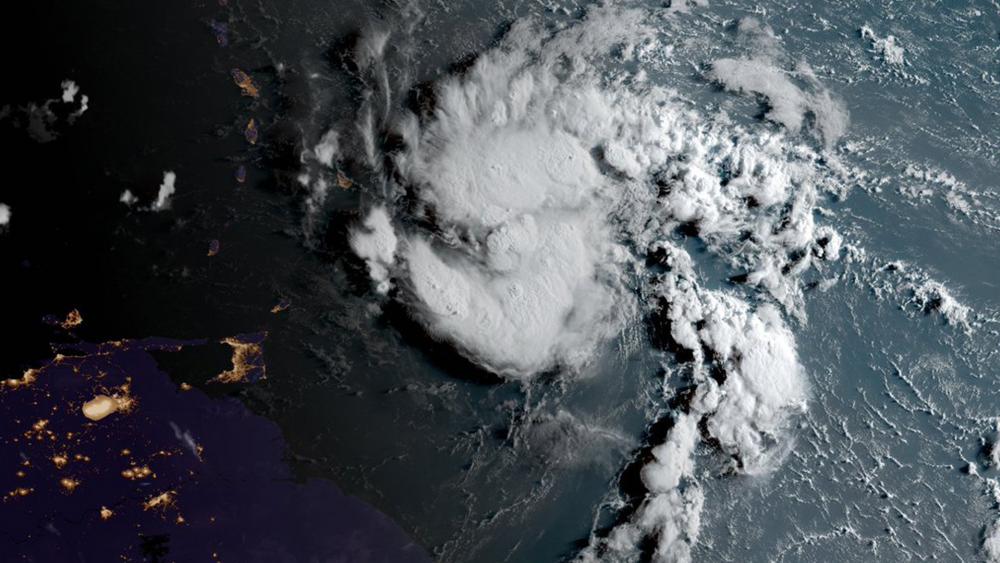 Tropical Storm Dorian (Photo: National Oceanic and Atmospheric Administration)
6078026028001
Dorian Could Slam into Struggling Puerto Rico or Even Hit Florida as a Hurricane

Tropical Storm Dorian is moving through the Caribbean Sea bringing heavy rainfall and gusty winds to the Lesser Antilles, on a track that could strike the US.

Accuweather meteorologists say it's now tracking toward Puerto Rico and Hispaniola, the island comprised of the Dominican Republic and Haiti.

The US National Hurricane Center says Dorian is likely to reach hurricane-force winds by the time it approaches Puerto Rico.

"Depending on its exact track and intensity, Dorian could cause flash flooding and mudslides on the steep terrain across Puerto Rico, the Dominican Republic and Haiti during the middle to latter part of the week as 4-8 inches of rain may fall in some areas," Accuweather Senior Meteorologist Dan Pydynowski said.

UPDATE: The latest NOAA #GOES16 imagery shows #TropicalStorm #Dorian heading toward the #LeewardIslands. It is expected to strengthen while it moves into the #Caribbean on Tuesday. Here’s the latest: https://t.co/OT12jdyEoE pic.twitter.com/Xi8Ma6Mqx6

Residents of that US territory are still trying to recover from widespread devastation from Hurricane Maria which struck with Category 4 winds back in 2017. Maria's devastation was so severe that 30,000 homes there still have blue tarps as roofs.

Puerto Ricans have been stockpiling groceries and gas in preparation for Dorian, loading up on food, water and generators. The island has endured serious problems with its electricity over the years. Maria demolished much of the power grid, and it's still not very stable.

Puerto Rico Gov. Wanda Vázquez has already declared a state of emergency. She says there are 360 shelters around the island for residents who still don't have a proper roof.

"I want everyone to feel calm," said. "Agency directors have prepared for the last two years. The experience of Maria has been a great lesson for everyone."

Forecasters say if the storm moves away from Puerto Rico and Hispaniola, it could strengthen further and become a hurricane threatening southeast Florida by the weekend.

"Dorian is a small storm, which will spare large areas from feeling its worst impacts. However, small storms can undergo rapid fluctuations in intensity," Accuweather states.