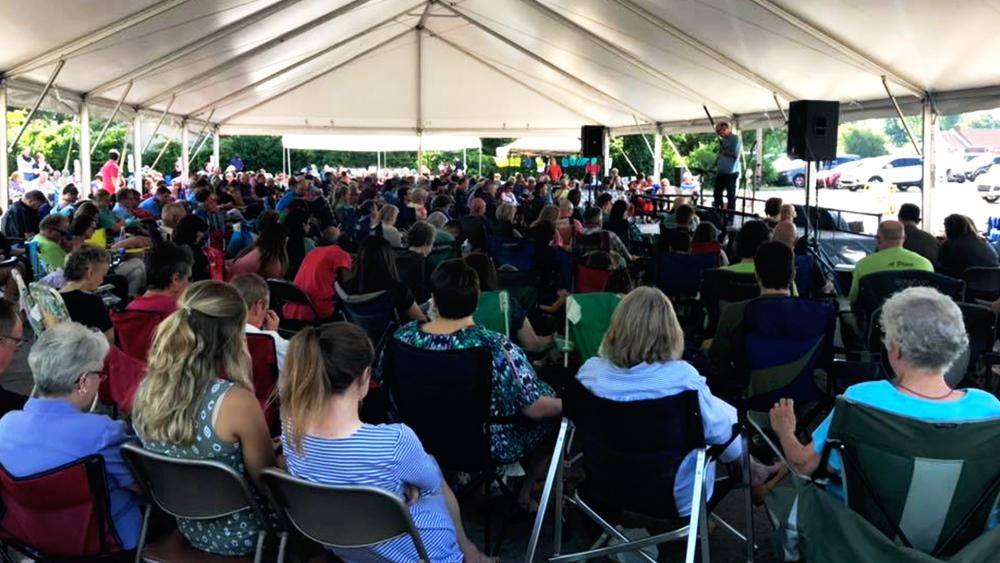 Last week, a well-known Tulsa, Oklahoma church building went up in flames. But that didn't stop the congregation from worshipping God as they have for decades, singing His praises not far from their ruined building.

Last Sunday, members of the Memorial Drive Church of Christ worshipped together under a massive white tent, singing with all of their might above the whirring sound of industrial-sized fans. And they also invited the world to witness their joy as the service was streamed live to their Facebook page with the title "Out of the Ashes WE RISE!" An excerpt from the lyrics of the Chris Tomlin song "Our God":

Into the darkness You shine,
Out of the ashes we rise,
There's no one like You, none like You!
Our God is greater, our God is stronger,
God You are higher than any other.
Our God...

The church has been a fixture in the east Tulsa area for many years. The Memorial Drive church is known for its local and international missions outreach programs. This included helping organize the Tulsa Soul-Winning Workshop that was held at the Tulsa Fairgrounds for 40 years and drew thousands of believers from churches of Christ from across the US and around the world. The event came to an end in 2017.

The church's staff posted photos of the burned building to Facebook.

Local fire officials have ruled out arson. The precise cause of the fire is still undetermined.

Local media outlets reported the fire broke out in the early morning hours of July 24. It apparently started in the center of the building and burned for more than four hours as 13 trucks and 65 firemen from 17 stations battled the blaze.

No one was injured.

"Lord, thank you for the good works and lives changed by the ministry of the Memorial Drive church and the activities and prayers that took place in this once beautiful facility," he wrote. "Bind the baptized ones together in love, and may this tragedy work for their good as they love you and glorify Christ in the Spirit. Give them an extra measure of your Holy Spirit, unity, the love of Christ, hope, and a peace that is mind-blowing ... straight from heaven. Thank you, in the strong name of Jesus. Amen"

Another user, Sandy Roberts Wiles, wrote: "Prayers for the Memorial church family from the Wiles family in Texas. My husband, Ben, and I met at Memorial 38 years ago next month. Today we celebrate our 37th wedding anniversary. We have precious memories of our time at Memorial and of the precious Christians who impacted our lives way back then and throughout these many years. May God bless you as you continue to trust in Him!"

"Prayers coming from the Philippines," he wrote. "Thanks God y'all safe. God bless you brethren."

John Thornton, the church's minister, said even though the fire was a sad event, members are excited about the future.

"Their response was disbelief, but also a question of wonder – I wonder what God's going to do with this?" he told CBN News. "That was consistent across the board. That was from people that are new to our family and people who have been in that building for 60 years."

"We were grieving," Thornton noted. "There were people shedding tears. But the sense of hope that really ran through every conversation was really remarkable. It just made me feel so blessed to be involved in leading a congregation that didn't need to be coached up. They were there."

"In every conversation, there was that thread. I wonder what Jesus has for us next?" he added. "I wonder what cool thing God has in store for us."

Thornton told CBN News the church is only in a holding pattern as far as the building goes. Their work will continue as the insurance company moves to settle their claim. The congregation will begin meeting this weekend in a building owned by Tulsa's East Side Christian Church. That congregation recently moved out and merged with another Christian church in another part of the city.

Sister churches of Christ in the Tulsa-area have offered prayers, help, and support, including volunteers for the coming cleanup.

Neighboring Methodist, Baptist, and Christian churches have also volunteered their buildings for the Memorial congregation to use.

"The response from the Christian community has been tremendous," Thorton said.