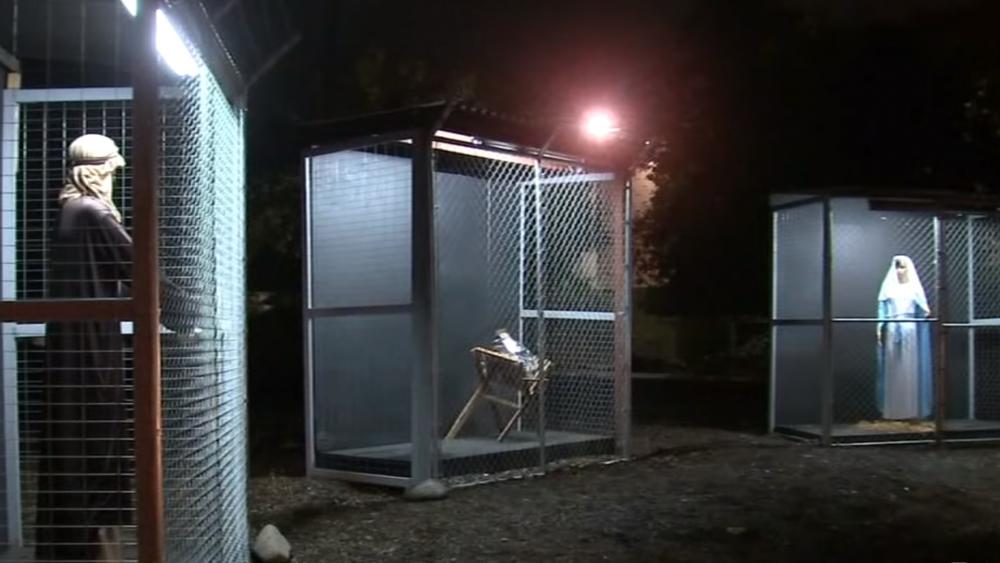 A California church is displaying a nativity scene that depicts Jesus, Mary, and Joseph as refugees in cages.

Claremont United Methodist Church converted the traditional nativity scene into the Holy Family being separated at the border and in cages, according to Fox News.

Pastor Karen Ristine wrote on her Facebook page that she was "stirred to tears" by the nativity.

"The theological statement posted with the nativity: In a time in our country when refugee families seek asylum at our borders and are unwillingly separated from one another, we consider the most well-known refugee family in the world," she wrote. "Jesus, Mary, and Joseph, the Holy Family. Shortly after the birth of Jesus, Joseph and Mary were forced to flee with their young son from Nazareth to Egypt to escape King Herod, a tyrant. They feared persecution and death."

Ristine notes that the Holy Family is reunited inside the church but urges viewers to consider, "What if this family sought refuge in our country today?"

"Our intent is to focus on the asylum seekers and the ways they are being greeted and treated and to suggest there might be a more compassionate way to show God's love," Ristine told The Washington Post.

"I think as Christians we have a responsibility to proclaim a narrative that might be counter to what the world thinks," she said.

The church said the nativity scene is supposed to draw attention to the immigration issues that started before President Trump took office.

"This church and its staff have taken a theological stand. A stand which many apparently disagree," Michael Tittle Marinelli wrote. "The Methodist Church has a long history of social activism and I could not be more proud of the stand and statement made by this Nativity."

Monica Eav Glicken wrote, "Thank you for this. I'm an immigration lawyer and a person of faith, and you have exactly captured in one scene so much of what I have been feeling under this administration. Thank you, thank you, thank you."

"Well. My take away from this is that there are actual Christians left in the United States and they are creative and brave," Wylthyld Gre commented.

The post has also sparked controversy, with some commenters attacking the church and their statement.

William Rebecca Stell wrote, "I think someone was looking for attention..."

"Church should stay out of politics !! Another story from a bleeding heart liberal that's had no idea of the need for a strong border policy," Randy Green wrote.

Doreen Rodak wrote, "I'm disgusted by such a display turning our Savior into a political circus. God was tired of all the corruption and put Donald Trump into the highest office in our country to expose this corruption."

This isn't the first time a church has made a statement with their nativity scene.

Christ Church Cathedral in Indianapolis, IN made headlines in 2018 for placing the Holy Family inside a cage on the church's front lawn, CBS News reported.

The campaign seeks to "bring awareness to the humanitarian atrocities from our nation's 'zero tolerance' immigration policies," the church said.

WCVB-TV in Boston reported that St. Susanna Parish in Dedham, MA has displayed a scene with the baby Jesus floating in water with plastic bottles. The words "God so Loved the World...Will We?" written above them.

The nativity scene is focused on the hazards of polluting our world and the continuing political argument about climate change.

Father Steve Josoma said, "I'm not sure if we're politicizing it; we're just painting an accurate picture of what the world is like this day."

Other churches have used the Holy Family to show their position on gun violence, including some of the worst mass shootings in history.