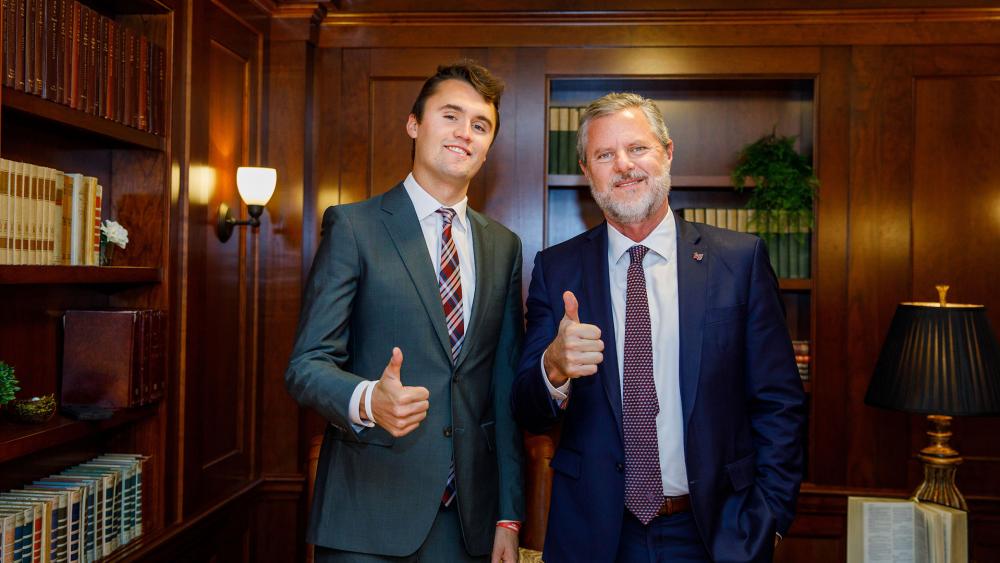 Jenna Ellis, an ambassador for the Falkirk Center for Faith and Liberty, appeared on Monday's edition of CBN News' Faith Nation to talk about the new think tank and why it's needed. Faith Nation is seen weeknights on the CBN News Channel.  For a programming schedule, click here.

Welcome to a new and vitally important cultural battle: the time-tested certainty of traditional biblical Christianity versus the dangers of secularism and socialism. Now, two new conservative influential heavyweights have teamed up to fight and win the ultimate victory.

A new think tank is being launched by Liberty University called the Falkirk Center for Faith and Liberty. The university's president Jerry Falwell and Turning Point USA founder Charlie Kirk have joined forces with a mission to, "proclaim the Truth of Jesus Christ" and in the process, "advance His Kingdom and renew American ideals." In short, the goal is to not only protect the fundamental Judeo-Christian principles upon which America was founded but to vigorously educate and explain them to an ill-informed younger generation.

"The Falkirk Center believes the role of government in America was intended only to protect our God-given rights and that it is a distortion of the teachings of Jesus Christ by the Left to suggest that Jesus was a socialist or that He instructed countries how they should be governed," Jerry Falwell Jr. tells CBN News. "Authoritarian government has always been the enemy of the church because the church has always been the grassroots source of positive change in every society except when the government-controlled the church."

In today's society, there are growing and valid concerns that younger generations are buying more of what the secular left is preaching on socialism and liberal, secular principles. A recent Survey Monkey Online Poll shows 61 percent of those between 18 and 24 have a positive reaction to the word, 'socialism.' A YouGov poll showed that twenty percent of Millennials actually believe the Communist Manifesto better guarantees freedom and equality for all than the Declaration of Independence. Compare that to just five percent of the Generation X population that came before them.

"Young Christians are becoming increasingly Marxist in their political leaning," Charlie Kirk said during an interview with CBN News. "The FalKirk center will seek to educate the public about the inseparable harmony between natural rights and the Gospel of Jesus Christ while rejecting the secular agenda of the left."

A rising number of younger Americans aren't just turning to government for solutions; they're also turning away from the church and biblical principles. A Pew poll shows a majority of Millenials (53 percent) seldom or never read the Bible. A Public Religion Research Institute poll revealed that only 25 percent between the ages of 18-29 say that the United States is currently a Christian nation. Even on basic history, younger Americans aren't as clued in. That same YouGov survey shows that 87 percent of high school students flunked a simple test of basic knowledge on American history.

That's why the Falkirk Center is bringing in the best of the best to educate the masses. Jenna Ellis, a constitutional law expert who received her Juris Doctor degree from the University of Richmond, is one of the center's ambassadors tasked with the role of explaining the importance of constitutional law from a Christian worldview. She says there's a critical disconnect between the older and younger generations, pointing out that this dangerous gap in values, principles and historical literacy is alarming.

"People need simple, understandable, repeatable truths when it comes to culture and politics," Ellis said. "There's a Gospel principle here, Jesus taught in parables.  We're a Think Tank that is focused on reaching a larger section of the population who aren't going to read policy papers or specifically Christian publications."

The Falkirk Center for Faith and Liberty will operate as a wholly-owned subsidiary of Liberty University under its 501(c)(3) charter. They plan to be well-diversified when combating false media narratives coming from the liberal news media, elected officials and plenty of academic institutions.

"Public schools and mainstream universities have been guilty of ignoring the exceptionalism of American history or revising it to focus only on the negative aspects, while conveniently ignoring the support of African-American slavery, Jim Crow laws and segregation by the Democratic Party," Falwell Jr. tells CBN News.

"The Falkirk Center will emphasize our Founders' intent to acknowledge the self-evident truths that all of us are created equal and endowed by our Creator with certain unalienable rights including life, liberty and the pursuit of happiness- and that these rights come directly from God, not the government or any organized religion," he explained.

So how will they be best effective in a culture that seems to have gone haywire? It'll start with a big emphasis on social media, an area where the battle for the minds of younger generations is won or lost.

"Ironically in a digital age, with metadata at our fingertips, people are lost when it comes to politics, policy, and current events," Ellis noted. "Falkirk Center is designed to engage socially and politically using the same tools that the left has been employing – social media."

Thomas Jefferson once said that "No country and no people can be free and ignorant at the same time." The Falkirk Center is hoping to replace ignorance with an igniting of a new generation that gives them the facts and perspective necessary to make an informed judgment that will protect America's founding Judeo-Christian principles and in the process, the future prosperity of the United States.