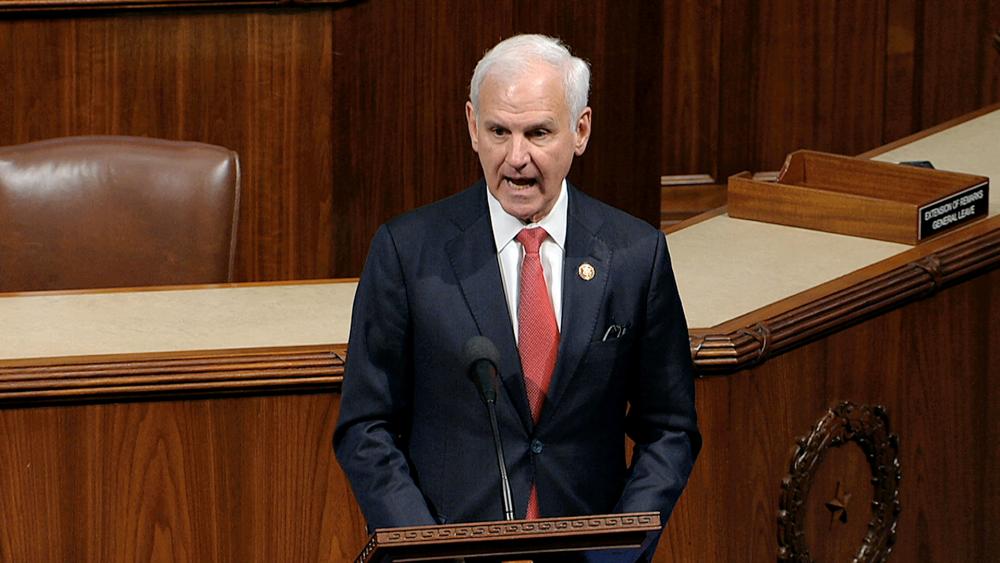 Rep. Bradley Byrne, R-AL, speaks as the House of Representatives debates the articles of impeachment against President Donald Trump at the Capitol in Washington, Dec. 18, 2019. (House Television via AP)

The Republican lawmaker jumped to the defense of a high school football team under fire from a Wisconsin-based gang of atheists, agnostics, and freethinkers.

The Freedom From Religion Foundation accused Tallapoosa County Schools of violating the law by allowing football players to participate in a baptism event at Reeltown High School.

The Alexander City Outlook reports that 26 players asked the coach if they could be baptized in a trough on the field prior to practice. It was a voluntary event and a good many players did not attend.

"Our community is based on those values overall," Johnson told the newspaper. "Everybody is not the same obviously, and we're fine with that. But the way we run our program, the way I run my program specifically is based 100 percent off Christian values."

But the out-of-town atheists accused Coach Johnson of breaking the law and they are demanding the school district investigate.

"The district should take the appropriate steps to ensure there will be no further religious rituals, including baptisms, during school-sponsored activities," attorney Christopher Line wrote in a letter to the school superintendent.

Well, Congressman Byrne sprang into action when he got word that a bunch of godless atheists were bullying the football players and the coach.

"This really makes me mad," the congressman wrote on Facebook. "I'm sick of these groups trying to tell us that we aren't allowed to live out our faith. The Freedom From Religion Foundation needs to pack it up and stop forcing their ungodly, un-American views down our throats."

Well, praise the Lord and pass the biscuits! I couldn't have said it better, congressman.

"The foundation says they want separation of church and state, but what they really want to do is to rip God out of our nation altogether," Rep. Bryne said.

FFRF co-president Annie Laurie Gaylor told Yellow Hammer News said they only got involved after a local resident complained. (I find that hard to believe, folks)

"It's egregious overstep for public school officials to put Christian baptism in the playbook," Ms. Gaylor told the news organization.

Rep. Byrne rightly called Gaylor and her cabal of troublemakers a "radical, anti-Christian organization" that's targeting a bunch of teenagers "who decided to give their life to Christ."

"Helping bring even a single person to know Christ should be praised, not attacked," the congressman said. "The Christian values that made our country great are under attack, and we need more leaders who aren't afraid to stand up for what is right."

"(Coach) Johnson stands by making his kids into better men, however, they choose to do so, and so do I," Arbogast wrote. "The Freedom From Religion Foundation needs to leave Reeltown well enough alone."

The Freedom From Religion Foundation has an ugly history of bullying Christians in small towns and communities across the fruited plain. And sadly, in many of those cases, the locals surrender their constitutional rights.

But this time, the out-of-town atheists made a serious tactical mistake. Because in Alabama – the Christians fight back.