Snow to Threaten Slick Travel Along 1,000-mile Corridor of US 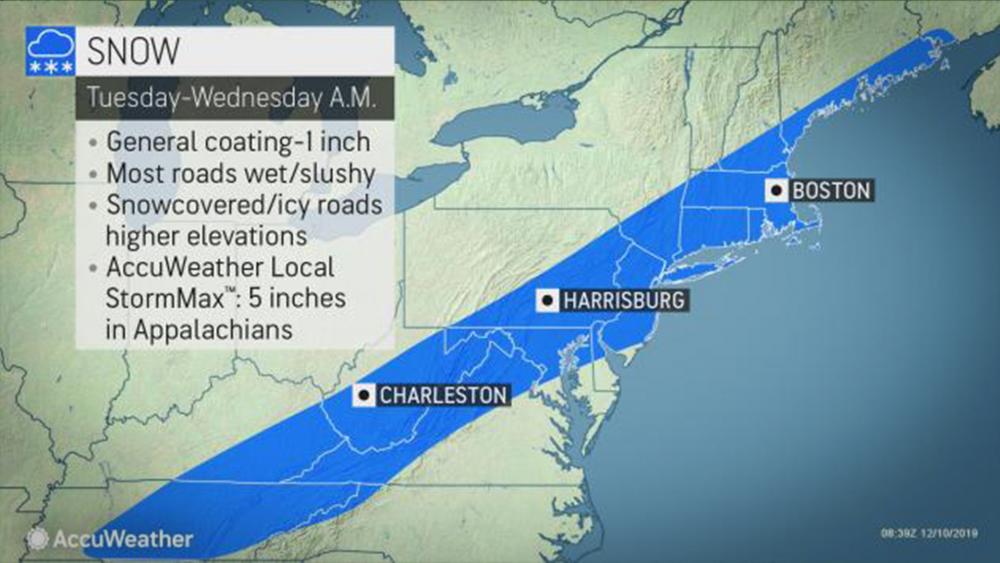 Forecasters warn that the weather will be like night and day for millions of Americans living in the eastern United States from the start of the week to midweek.

Easterners woke up to a drenching rainstorm and a surge in unusually warm air to start the week, and AccuWeather meteorologists say the stage is set for localized flooding, especially where heavy snow remains on the ground, through Tuesday.

Soon after the rainstorm moves away, a much weaker storm will develop along a trailing cold front. The very weak storm will have just enough influence to slow the departure of moisture.

Much colder air will arrive on the backside of the system, causing rain to mix with and change to wet snow along an approximate 1,000-mile corridor from eastern Tennessee to southeastern Maine spanning Tuesday night to Wednesday morning.

A wintry mix that includes some snow and sleet will occur on Tuesday from parts of northern Texas to western Tennessee.

While the majority of roads in this area will be just wet, a small, slushy accumulation can occur on grassy areas, vehicles, and elevated surfaces.

In some cases in the Northeast, the rain may end first, then snow may blossom a few hours later.

Along the I-95 corridor, the drive home Tuesday is likely to be wet, but the Wednesday morning commute is likely to be wintry. Snow may create slick roads from Washington, D.C., and Baltimore to Philadelphia, New York City, Boston, and Portland, Maine. AccuWeather meteorologists warn that both types of weather conditions can cause their share of travel delays.

"Along the 1,000-mile swath, a general coating to 3 inches of snow is forecast. An AccuWeather Local StormMax™ of 5 inches is most likely over the Appalachians or hilly areas," AccuWeather Chief Broadcast Meteorologist Bernie Rayno said.

"Much less snow is expected to accumulate on the roads," Rayno added.

Exactly how much snow is able to accumulate on roads is dependent on how quickly these surfaces cool and the intensity of snowfall.

Most road surfaces will have had a chance to warm up through Tuesday, along with the surge of warmer air. The roads will tend to retain some warmth for a time even as the colder air and snow arrive.

Initially, some of the snow is likely to melt as it falls on warmer surfaces. But, elevated surfaces such as cars, lawns, decks, porches, bridges, and overpasses are likely to become snow-covered much faster than city streets and main highways.