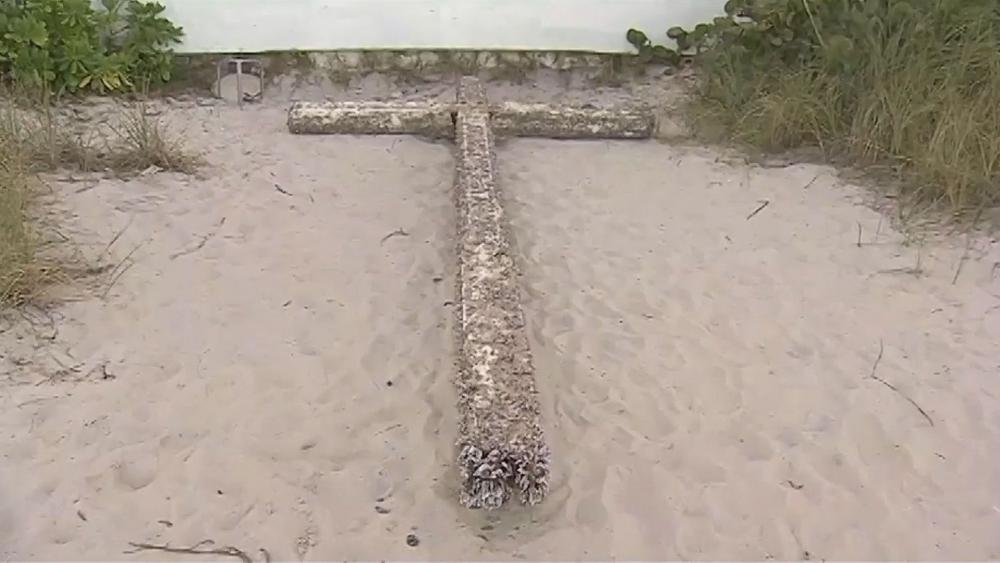 A mysterious wooden cross washed up on the shores of a South Florida beach, prompting one passerby to renew his relationship with God.

The large cross barnacle-encrusted cross appeared behind the Ocean Manor Beach Resort along Galt Ocean Mile in Fort Lauderdale over the weekend.

A group of people dragged it out of the water and farther onto the beach.

No one knows where it came from.

"People have suggested possibly Puerto Rico," John Moschella, who discovered the cross, told Fox 13. "Others have said the Keys. It's really unknown where it has come from."

Frank Talerico, the owner of the Ocean Manor Resort Hotel, said while it could be a coincidence, the old wooden cross could also be a sign of God's protection. He said hours before the cross showed up on the shore, he and his sister were praying together at the hotel after she was frightened by a dream the night before.

"She's like, 'You know what? It's not that big a deal. I just had a bad dream and a bad feeling, so I wanted to come here and pray,'" he recalled. "And I said, 'Okay, thanks for doing that.'"

Soon after, the waves brought the cross to shore.

"You know what? I'm glad it's here," Talerico said. "It's staying here and if anybody wants to come see it or take a picture with it, they're more than welcome."

John Skorupa told the Sun Sentinel he had a spiritual revelation when he saw the cross.

"I called up a girlfriend that I went to church with a few times and I said, 'Let's start meeting again for church services,'" he said. "I brought her flowers."