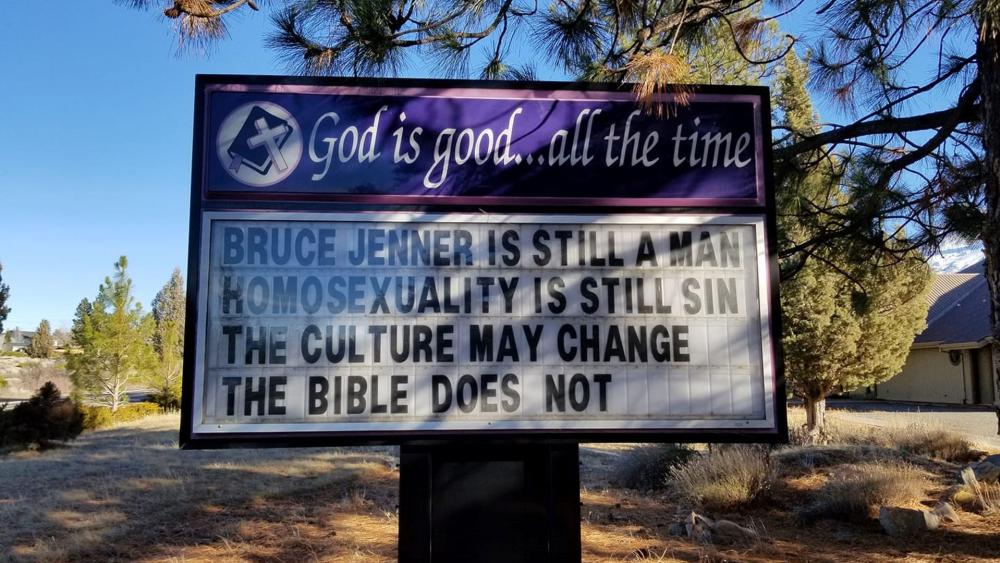 A California pastor is looking for a job after facing backlash over a church sign that affirms the biblical definition of gender and marriage.

Pastor Justin Hoke of Trinity Bible Presbyterian Church in Weed, California, posted a new church sign in early January. The sign read: "Bruce Jenner is still a man. Homosexuality is still sin. The culture may change. The Bible does not."

"The ultimate purpose was to say that while the culture may change, the Bible does not," Hoke told SF Gate. "The culture is now demanding that we call 'good' what the Bible calls evil."

Want More News from the Christian Perspective? Click Here to Get CBN News Alerts in Your Inbox - It's Free!

The message immediately sparked protests among members of the community. A number of demonstrators gathered outside the church for the first ever "Shastina Love Rally," which condemned the sign and praised the LGBT community.

"We've really had to refine our message to be one strictly of love and support for anyone who feels like they are the target of the sign," Amelia Mallory, one of three women who organized the rally, told SF Gate. "Debating religion is unproductive, for one, and we also don't want anyone to feel like we are against Christianity as a whole. People are welcome to their own beliefs but can't be surprised if people take action against such a public display."

"I woke this morning to find that our sign had been vandalized. They broke not only the plexiglass and stole some of the Letters, they also busted the power box. I have not seen it up close yet as this picture was sent to me by a member of our congregation. Please pray that God would provide," Pastor Hoke wrote on Facebook Jan. 9.

Pastor Hoke patched up the sign and put the message on display once again.

According to the Facebook post, Hoke says multiple people, including a church elder, threatened to leave if he did not step down as pastor.

"I did not want to leave, I did not quit, and I was willing to stay," Pastor Hoke added.

Get Your News from the Christian Perspective: Click HERE for the FREE CBN News App

Hoke later told The Daily Wire he was not fired but decided to leave to save the church from fracturing.

For now, he says he is eager to preach the Gospel again.

"Many people have reached out asking if they could help me in some physical or monetary way. I am really thankful for such thoughts and offers. But, I don't want to use this 5 minutes of fame as a chance to capitalize on the sympathy and good will of others. The Lord has taken care of my needs," he wrote in a Facebook post.

"Please pray that God would open more doors for me to preach the Gospel, that is all I want or need," Pastor Hoke added.