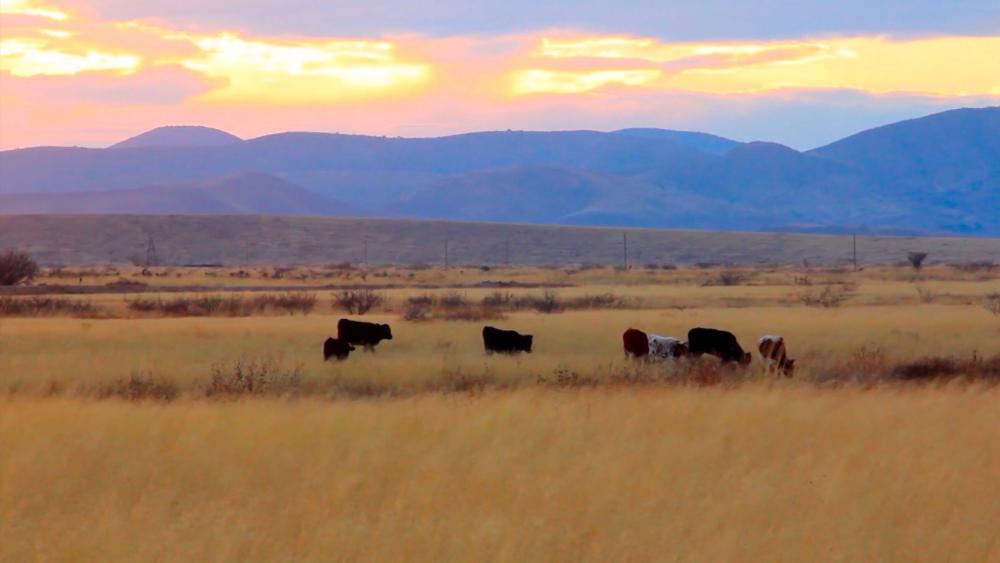 ARIZONA-MEXICO BORDER – With Democrats in Congress and the White House both refusing to budge on border security, illegal immigrant apprehensions are up dramatically along the southwest border. CBN News correspondent Chuck Holton recently returned from Arizona, where he asked local residents and law enforcement about what's really happening on the border.

At 83 years old, Glenn works the ranch each day and is well known throughout the area. He says illegal immigrants have always been a part of the landscape.

"We moved down here in '62." He told CBN News. "And at that time, there would be two or three illegals coming through looking for work and all the ranchers worked them. They were wonderful for hard labor type work and good cowboys if you needed a cowboy."

"But I tell you nowadays," He continued, "The few that are coming through are pretty hard-core, and especially the drug guys."

And now residents on the border are seeing an overall rise in crime.

Grossman lives in the same area, and illegal crossers have entered his home a number of times. He recently caught a smuggler trying to steal his truck.

"I brought him back to the house," Grossman recounted. "And then my wife called the sheriff, and the sheriff and border patrol come up and got him and then we went back to my pickup and there was a bale of marijuana in the back of my pickup and he had stolen a lot of stuff from the house."

But petty theft isn't what worries these old cowboys the most.

Glenn says it would be nothing for a terrorist from ISIS to cross the border and hike up through the mountains undetected.

Billy Grossman agreed. "Well, if it's that easy for an unemployed Mexican to come in here, ISIS could come in here plum simple."

In fact, 3,755 known or suspected terrorists were prevented from traveling to or entering the US by the Department of Homeland Security in Fiscal Year 2018.

The Tohonoo'odham Indian reservation has one of the loneliest border crossings on the southern frontier. The reservation covers about 4,000 square miles of desert in Arizona. Only about 10,000 people live there and they live on both sides of the border. They used to go back and forth with impunity. But it's getting harder for them to visit their relatives now because of the incredible amount of human smuggling and drug trafficking that happens in the area.

Unemployment on the reservation sits at more than 25 percent while the average annual income is only about $8,000. This makes smuggling an attractive proposition when cartel members offer up to $5,000 per load.

Matt Thomas is a deputy in Pinal County, just north of the Tohonoo'odham reservation. He describes the reservation saying, "It's all open desert, and there are small villages throughout the reservation, but no major towns, no major cities. Very minimal population, very minimal law enforcement, so they don't have a lot of interference to deal with from Mexico until they hit our county. There's a huge area that the cartels use to cross into the US where they go undetected. And as they cross into that area then they start to funnel because of terrain towards our county."

This makes catching smugglers more and more challenging. And this corridor has become known for violence, too. Last year a border agent was shot by smugglers as he patrolled alone in the vast desert west of Nogales.

"They've gotten more advanced and there are more numbers," Thomas explains. "They set up their own networks now and they pretty much control the terrain and those networks. They have good control of them visually which means that if we go in by air or by land they know that and so they can adjust they can shut down operations and they can maneuver around us."

Cochise County Sheriff Mark Dannels oversees a border county covering more land than Connecticut. He says when the government fails to take a strong stand on immigration, it only makes things worse. "Those that want to come into this country and harm us – terrorists – have the infrastructure to get through here in Cochise County," he explains. "Anytime this administration talks about amnesty or anything that has to do with the border we have an influx of people coming across. We sit back all the time and just wonder, why they won't do something to fix this problem.'"

President Trump has so far been prevented from making long-term strides to truly stem the tide. And while the politicians point fingers, the cartels are ramping up their business. Over the last ten years, the amount of cocaine coming across the southern border has more than doubled. The amount of methamphetamine, fentanyl, and heroin seized has increased as much as 4,000 percent.

Meanwhile, the 5,000 members of the US military currently deployed along the border bolster existing barriers, the additional air assets they provide are also providing border agents with a faster way to respond when they get alerted.

William Colson is a Border Patrol agent. "It's been a great partnership, we've had extreme success," he says. "Just the other day we were able to apprehend three different groups within a two-hour window and traditionally if we were just on the ground that could take one agent about four to five hours just to apprehend one group."

But with the cartels rushing to take advantage of the crisis and with Congress and the White House at odds about solutions, the troops on the border are going to stay as long as they are needed.