Bullet-Riddled 'Old Glory' That Survived D-Day Returns to US, a 'Reminder of the Supreme Sacrifice' 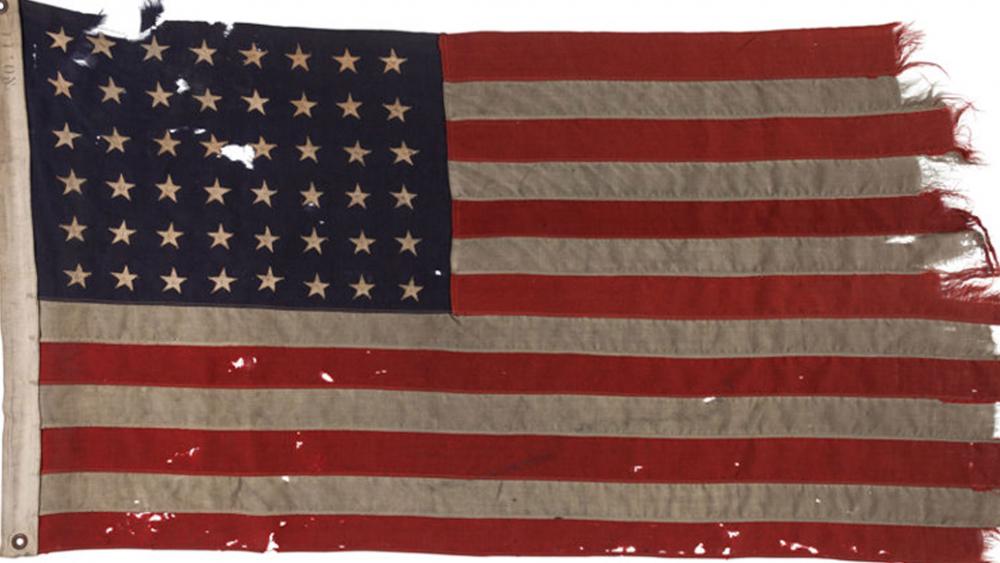 This 48-star American flag tattered by the wind and torn by German machine gun bullets on D-Day was returned to the US Thursday. ( Image credit: Heritage Auctions, HA.com)

A wind-tattered, American flag riddled by German machine-gun bullets is back in the US after 75 years.

Retired Dutch businessman and collector Bert Kreuk bought the flag three years ago for $514,000 at an auction with the sole purpose of returning it to the United States.

"I cannot keep it myself. It needs to go to the right institution. I need to give it back," Kreuk told Reuters in a telephone interview ahead of the ceremony.

The 48-star version of 'Old Glory' flew on the US Navy's Landing Craft Control 60, one of the first three US advance ships carrying invasion troops intended for the landings at Utah Beach on the Normandy coast of France on June 6, 1944.  It was the only ship to survive D-Day, the battle which ultimately led to the Allied defeat of Nazi Germany.

The ship's flag was brought home after the war by its commander US Navy Lieutenant Howard Vander Beek, who kept it until he died in 2014.

In his remarks accepting the flag, President Trump honored the bravery of Vander Beek and his 14-man crew.

"Amid treacherous German minefields, raging winds, and rough seas, Lieutenant Vander Beek and his crew led an astonishing 19 waves of American troops and equipment to those very, very dangerous beaches," Trump said. "Through it all, this flag soared proudly above the waters of the English Channel, announcing the arrival of our American warriors."

"It is my honor to welcome this great American flag back home where it belongs," he continued, calling it a "reminder of the supreme sacrifice of our warriors and the beautiful friendship between the Dutch and the American people."

The flag will be displayed at the Smithsonian Institution's Museum of American History in Washington, DC.