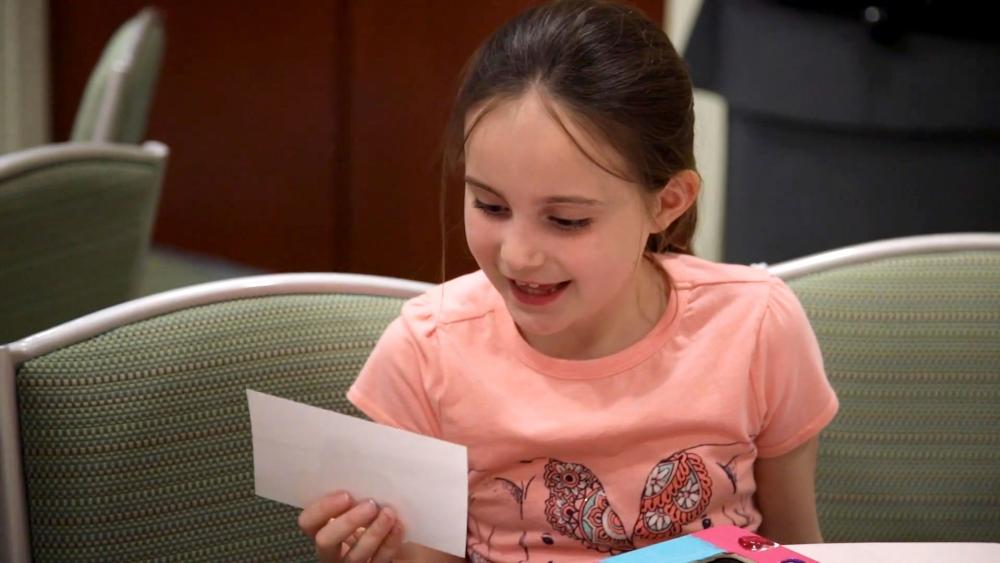 NORWELL, Mass. – Losing a parent can be tough, no matter how old you are when it happens. But for young children, that loss can be devastating and its impact acutely felt for many years.

"My mother's death really shaped every aspect of my life," says Cara Belvin. From the moment her mom died from breast cancer, her life became before and after.

She went from student, friend, and a kid, to the girl who'd lost her mother.

"You're living in a world that is going on as normal for everyone else and you're trying to keep up with that and yet you have this thing that makes you so incredibly different," Cara told CBN News.

She says while she had family support, she was craving something more.

"I think ultimately what I was craving was for someone to just say, 'It's survivable,' because it just feels like a one-ton brick on your chest that will never lift. So that's hard for any child who's experienced trauma, it's hard to see past that," Cara explained.

As an adult, she met others who had lost their mothers. She stepped into their grief as a friend, mentor, and survivor.

Cara then took it one step further, starting the organization EmpowerHer, a non-profit modeled off the things that Cara felt she needed most when she lost her mom: a strong female role-model and the knowledge that she wasn't alone in her grief.

EmpowerHer currently serves more than 150 girls up to the age of 24. They participate in events like a Mothers Day retreat so that they can connect with one another. Girls are also matched with a mentor.

"When we have an event at EmpowerHer the girls get to stand, look around the room, and realize they're not alone in their grief," Cara said, "The mentor program that we started is designed to support the girl year round and promote positive growth in her grief journey," she continued.

Mentor Ann Marie Leitao, who lost her mom when she was 10 years old, found out about Cara's work in college.

"I met Cara and it was as if someone was reading my mind. Everything I had gone through, she had gone through and now she wants to do something about it," Ann Marie said.

She joined the list of EmpowerHer mentors, expecting to be connected with a stranger who was going through the loss of her mom. Instead, she got Molly.

"I actually was introduced to Molly's family when I was in high school. I was living in North Attleborough, Mass., and I had gotten in touch with Molly's mom Brittan, who had needed a babysitter," Ann Marie shared.

"So Molly, at the time, was only three or four months old and I was just a teenager. So I started babysitting Molly from when she was really little and we grew a really close relationship," she continued.

About the same time that Ann Marie started looking for someone to mentor with EmpowerHer, Molly's mom Brittan got sick. Given their special relationship, Ann Marie was able to make Brittan a promise before she died.

"I told her about EmpowerHer and I told her that I would always be by Molly's side, I will always look out for Molly and she has a younger sister Maddie, who was one at the time," Ann Marie said.

"Like the memories that I didn't remember, kind of like the ones when I was really, really small," Molly said.

"Brittan would always encourage people to go for it, encourage Molly to go for it. Molly's the only girl on an entire team of boys at hockey and I just completely see Brittan in all of that," Ann Marie said.

Molly's dad, Mike, says he wants his daughters to become strong women, and recognize what they can offer because of this great loss.

"My hope is that one day she's going to be like Ann Marie and help another little girl that's in the same unfortunate situation," he said.

"These girls are at risk for really poor choices, bad behavior; and so I'm trying to tell community members, maybe she's not as fine as she says she is, maybe it's OK to ask her how she's doing, it's OK to offer help, and maybe it's OK to talk about her loss. She's not going to be reminded of anything she's not already thinking of. She'd prefer it to you whispering behind her back," Belvin said.