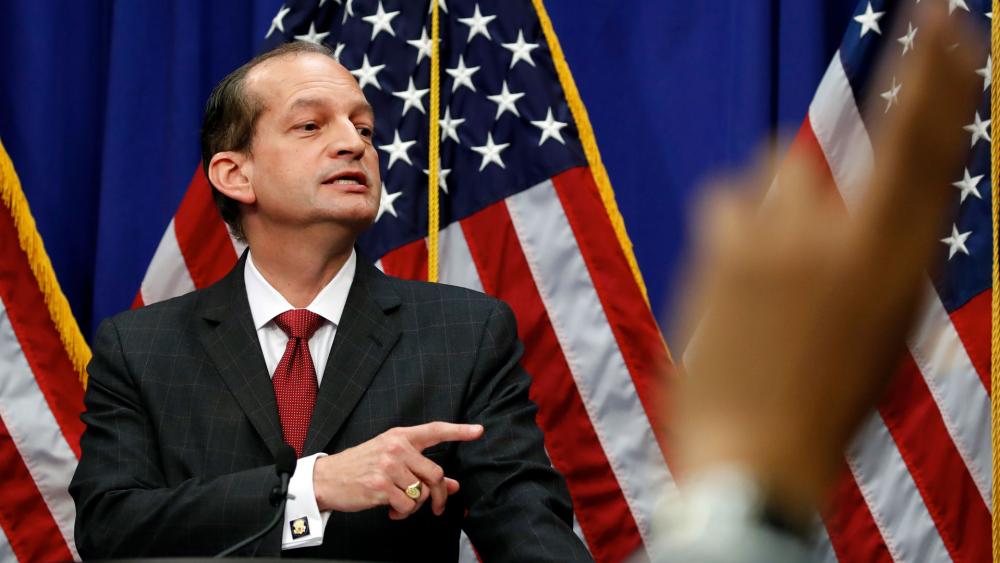 Labor Secretary Alex Acosta calls on a reporter to ask a question during a news conference at the Department of Labor, Wednesday, July 10, 2019, in Washington. (AP Photo/Alex Brandon)

Labor Secretary Alex Acosta held a news conference Wednesday to defend himself amid an outcry over how he handled what some have characterized as a sweetheart plea deal for a sex-trafficking case involving now-jailed financier Jeffrey Epstein.

"We believe that we proceeded appropriately," Acosta told reporters at a news conference at Labor Department headquarters, where he retraced steps federal prosecutors took in the case a decade ago when he was U.S. attorney for the Southern District of Florida.

Acosta said state authorities had planned to go after Epstein with charges that would have resulted in no jail time until his office intervened and pressed for tougher consequences.

"We did what we did because we wanted to see Epstein go to jail," he said. "That was the focus." He added: "Facts are important and facts are being overlooked."

High-ranking Democrats and 2020 presidential candidates are calling for Acosta to step down or be fired over his role in brokering a plea deal with Epstein more than a decade ago.

President Trump, Acosta's current boss, is standing behind his labor secretary.  Acosta said he has an excellent relationship with the President who wants him to stay in his position.