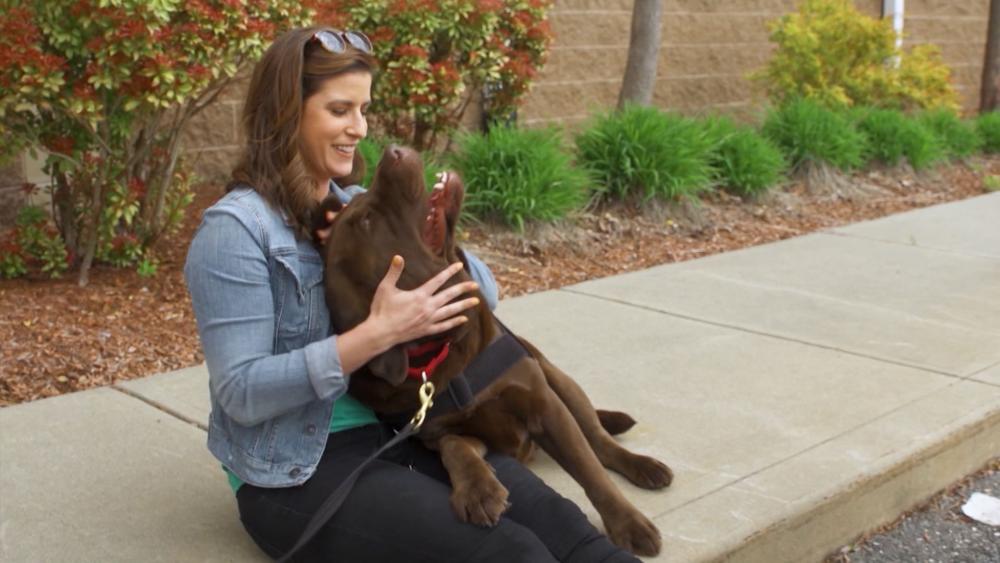 FRAMINGHAM, Mass. – In April, the Massachusetts State Police welcomed their youngest recruit ever. Just like every officer who joins the force, she's got some training ahead. But eventually, she'll be exposed to some of the most stressful situations and will work towards the department's mission of helping people in need.

Her name is Luna. She's a five-month-old black Labrador and the first comfort dog to serve with the Massachusetts State Police. Her handler is Trooper Chad Tata who works in the Employee Assistance Unit and is also a licensed social worker.

"Just from my background and research, I know that comfort dogs do work. They relieve stress and anxiety and they lower the stress hormone cortisol. It's good to have them around any officers who experienced any kind of anxiety or anything after a traumatic event. It's good to have Luna around just to be there and if they want to touch her and calm down, she'll be available," Trooper Tata told CBN News.

Just the Dog for the Job

Before putting together a proposal for his own unit to get a comfort dog, Trooper Tata took a trip to the Lunenburg Police Department to meet School Resource Officer Brad McNamara and his partner Hank.

"We pretty much hang out in the library, and kids, when they have study, they have break, they spend time with Hank and then when there's a crisis with kids in the school he and I respond to that and help de-escalate whoever," said Officer McNamara, who says he can see the difference it makes when students interact with Hank, such as when a fifth grader who lost his little brother to cancer didn't want to return to school.

"He came and visited with Hank and me for about 45 minutes and after that, he said, 'OK I'm ready to go back to school, will you be here tomorrow so I can sit down and talk with you tomorrow?'" Officer McNamara told CBN News.

You don't have to be around Hank for long to see he's got a gift for making people smile.

Before serving with Officer McNamara in the Lunenburg Public Schools, the two went through eight weeks of training so that Hank could get his therapy dog certification. During that process, it became clear that Hank was a perfect fit for this kind of work.

"He'll go sit next to someone and he'll sit on their lap or lick their face or he'll just quietly lay next to them and let them pet him. He's good at his job and just being around the dog helps people," said Officer McNamara.

Hank even has his own Instagram page so his fans can follow him on the job and even out on adventures.

Both Luna and Hank were donated by breeders Peggi and David Brogan from Boonefield Labradors.

"It started for us about nine years ago when I got an American Lab and he came and lived with us during a tough time with my health and he's the one who got me feeling better. So I had always said I was going to give it back. I was going to pay it forward at some point, so that's how we originally got into the therapy work," Peggi Brogan told CBN News.

The Brogans donated a third dog to the Hancock, New Hampshire Police Department. His name is Officer Rookie.

"Actually it was all by chance that I got Rookie. She had a cancellation in one of her litters with him and she ended up posting him on Facebook and I'm a friend [of hers] on Facebook. So I ended up contacting her and we agreed it was time to put him into service," said Hancock Police Chief Andrew Wood.

Back at the Massachusetts State Police, Luna is working on some basic training. Eventually, Trooper Tata would like to be able to take her to incidents nationwide.

Comfort dogs have already helped people affected by tragedies such as the Newtown school shooting in 2012, last year's attack on a Pittsburgh synagogue, and in early June after the shooting at the Virginia Beach government building.

The Brogans say they've seen the difference a comfort dog can make and their hope for the dogs they donate to police departments is simple:

"That they'll bring a sense of calm and comfort to not only the general public but to the officers and departments that have them and we'd like to see it happen in a lot of towns and we're prepared to make it happen," said Peggi Brogan.

The Brogans are committed to making sure that each police department that wants a comfort dog can have one because they say there's no limit to the impact that can be made.