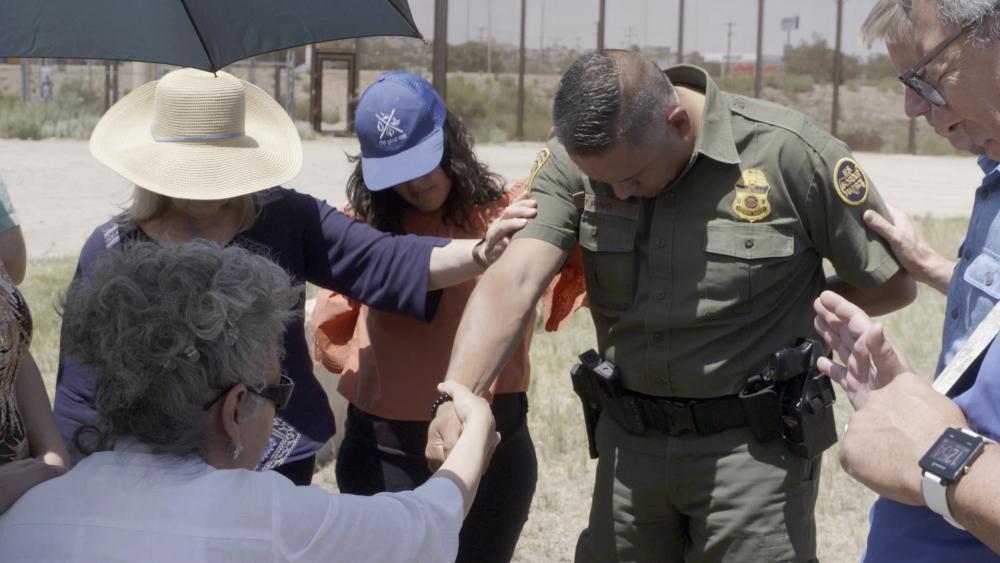 Members of the Evangelical Immigration Table delegation praying for a Border Patrol Agent (Photo: CBN News)
6053525882001
Churches at the Border: 'God Is Calling Us to Step into a Gap'

EL PASO, Texas – Far from the battle in Washington over humanitarian funding for the border crisis, believers on both sides of the Rio Grande are coming together to care for the thousands of asylum seekers hoping to receive a legal pathway into the US.

In El Paso, Sami DiPasquale, the executive director of Ciudad Nueva, a faith-based community outreach center, says 30 local churches have united in recent months to care for as many as 1,000 new migrants released by US Immigration & Customs Enforcement (ICE) every day. "They've been hosting. They've been donating materials. They've been activating their denominations," said DiPasquale.

Tiny El Elyon, a neighborhood congregation in El Paso, has taken in 70 migrants every night for months.

But in mid-June, El Elyon and other shelters here abruptly learned that ICE would no longer be dropping off migrants at their front door, as had been the daily pattern. "We used to do this every single day, seven days a week," said Pastor Maribel Velazquez. "I was always depending on the Lord and saying, 'Lord, what do you want me to do? It's a multitude of people that need us.'"

Faith leaders in El Paso believe that President Trump's new "Remain in Mexico" policy may be the reason why El Paso is now just receiving several hundred migrants a day. The policy has encouraged Mexican police to deter immigrants from entering the country's southern border and from trying to cross the US-Mexico border. It has also led US authorities to send asylum-seekers back to Mexico to wait on their immigration court hearings. The EIT includes leading denominations such as Southern Baptists, Wesleyans and the Assemblies of God. Major faith-based non-profits such as World Vision, World Relief and Bethany Christian Services are also active.

The EIT delegation engaged with a wide range of groups in El Paso, including Border Patrol, the Hope Border Institute and Annunciation House, a faith-based group that serves immigrants at the border.

The delegation had expected to receive a firsthand look the crush of migrants coming over the border and seeking temporary shelter in faith-based shelters. Instead, it witnessed a turning point as El Paso ministries began to realize they may no longer directly serve immigrants at the emergency scale with which they had become accustomed.

DiPasquale says these ministries are now turning their attention to churches in Juarez, their sister city in Mexico. "Our intention is to shift efforts and be able to support the efforts right across the border," he said.

Members of the EIT delegation said they hope to communicate with believers across the country about the dramatic needs at the border, even as policy and migration patterns continue to ebb and flow.

"What we know about this situation is it's fluid. It's changing all the time," said World Relief president Scott Arbeiter. "It's now shifting back—we'll see what happens."

Arbeiter said he hopes churches across the country won't miss this unique moment to minister.

Ciudad Nueva has established a link on Amazon for those who wish to contribute to emergency supplies for faith-based shelters on both sides of the border.