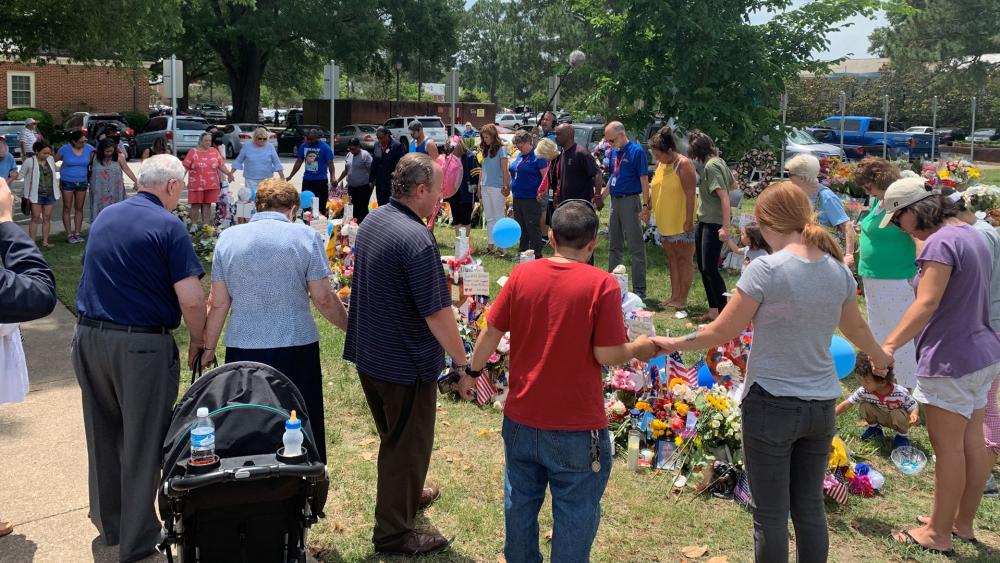 A crowd gathers to pray at the Virginia Beach courthouse in the aftermath of the recent mass shooting (Photo: Jason Gill/CBN News)

Less than 72 hours after the mass shooting that left 11 city workers and 1 contractor dead, all municipal buildings have reopened except for Building 2, where police are still at work gathering evidence.

As the City of Virginia Beach tries to resume normal operations, several offices have adjusted payment deadlines and extended their work hours.

An impromptu prayer circle took place around a memorial of flowers outside the courthouse on Tuesday. Many have visited the makeshift memorial setup to remember the victims.

Prayer gatherings have been a constant sight at the municipal center and within the community since the tragedy occurred.

Courthouse Community UMC in Virginia Beach held a prayer service on Monday June 3. The church ministered to city employees, family members and the community giving hope for the future and prayers of healing.

An outpouring of love and support was also offered to the community as many gathered at Coaster Coffee on Monday June 3 in Norfolk.

And a prayer vigil was held at Pine Grove Baptist Church in Virginia Beach on Sunday June 2. Those suffering from sorrow and emotional wounds were lifted up in prayer during the worship service.

As CBN News has reported, Mayor Bobby Dyer said the recovery from this tragedy will be "a lifelong process" for the survivors who endured the shooting and the families who lost loved ones. "We're gonna be there as a city, as a nation, we will embrace the victims, the families, and we will improve things," he said.

Investigators are still searching for a motive in the shooting, but the gunman reportedly appeared to target supervisors in his department, according to a survivor of the attack and a city councilman in a report from CNN.

Prayer vigils continue to occur throughout the area for those wishing to honor the victims and their families.

Meanwhile, chaplains with the Billy Graham Rapid Response team have been at the scene of the makeshift memorial all week to offer prayer to those who need it.

Chaplain Coordinator Bob Poff told CBN News he had a special moment after a local pastor encouraged everyone to pick one victim's family to pray for.

"I picked the contractor, because my father was a contracter," Poff said. "And Sunday afternoon I met his granddaughter, and yesterday I was able to meet his family - parents, and wife and son. And that was very moving for me to think that's who I'm praying for and then be able to pray with them in person."

CBN News will share that ceremony LIVE on the CBN Newschannel.

If you'd like to help the families of the victims of Friday's tragedy - CBN's Operation Blessing is taking donations for them.

Donations provide assistance and support, reminding those who are suffering that others deeply care about this tragedy. One hundred percent of your gift will go to the families to help them in their time of devastating need.