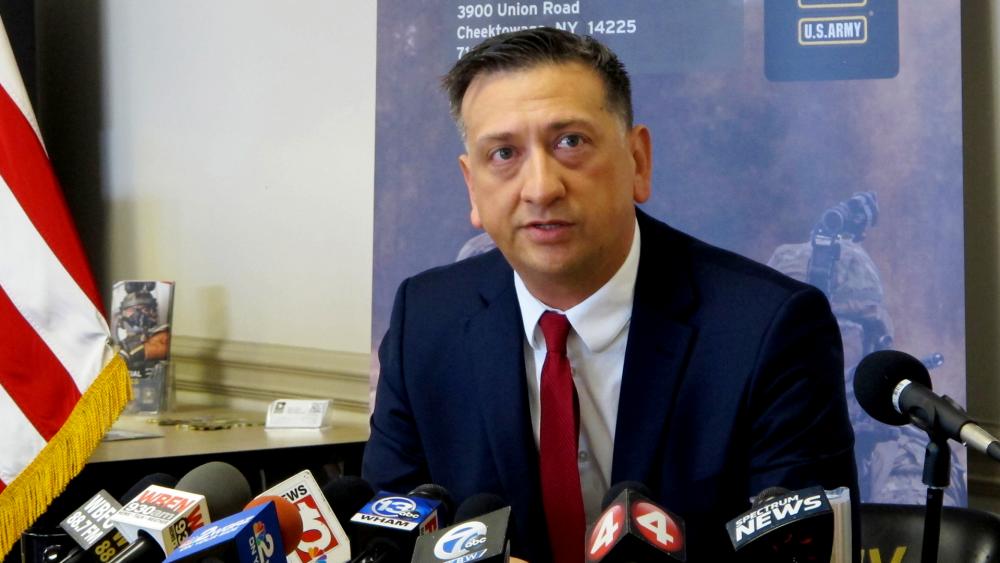 President Donald Trump presented the nation's highest military honor to a former Army staff sergeant on Tuesday who risked his life to save other members of his squad in Iraq.

David Bellavia of Lyndonville, New York, is the first living Iraq War veteran to receive the Medal of Honor. Instead of using the occasion to shine a spotlight on himself, Bellavia has been reflecting on his fellow soldiers with whom he served.

Watch the ceremony below:

"Our brigade combat team lost 37 people that year," he explained, adding: "We lost four men in Fallujah. You know I think about them every day."

"As awkward as this process is to be singled out, I just want to say how absolutely grateful I am that attention can be given to the men and women of 22 Infantry 3rd Brigade," he said. "It's really not enough that we honor the fact that we lost people at war for this country, but to acknowledge how they died and why they died. They died for us."

"They took a slot. They took a mission. They did a job," Bellavia noted.

Bellavia bravely entered a house in Fallujah, Iraq in November 2004 where his squad was trapped, providing covering fire so they could escape, before re-entering the house, single-handedly killing five insurgents who were firing rocket-propelled grenades.

"It's been 15 years and the loss that we had out there is very real," he recounted.

Bellavia, who left the Army in 2005, has been awarded the Silver Star, the Bronze Star and the New York State Conspicuous Service Cross.

"I have a great deal of respect for the Iraq war veteran," Bellavia said. "Obviously, this award, I have a tremendous amount of reverence for the award itself. But you know, the Iraq war veteran has served and surpassed at times the highest standards of American warrior tradition amongst any generation."

"We have nothing to apologize for," he continued. "We serve our country. We do what our leaders tell us to do. It's, you know, the narrative on the Iraq war has long been written. I'm not here to change anyone's mind. I'm here to tell you that there are men and women who have served their country in Iraq and it has made me."

"It is one of the honors of my life to be a part of that veteran and the men and women of 22 Infantry in particular, when you think of that valor and that sacrifice," he concluded.

Former Staff Sgt. David Bellavia, from the @FightingFirst will be awarded the #MedalOfHonor at a @WhiteHouse ceremony at 3:30 PM EDT today.

Learn more about Bellavia, the history of the Medal Of Honor and more at: https://t.co/PCCRtmPXJi pic.twitter.com/RwyvkyiFkE